What Good Did Mahmood Madani Suddenly See In PM Modi? 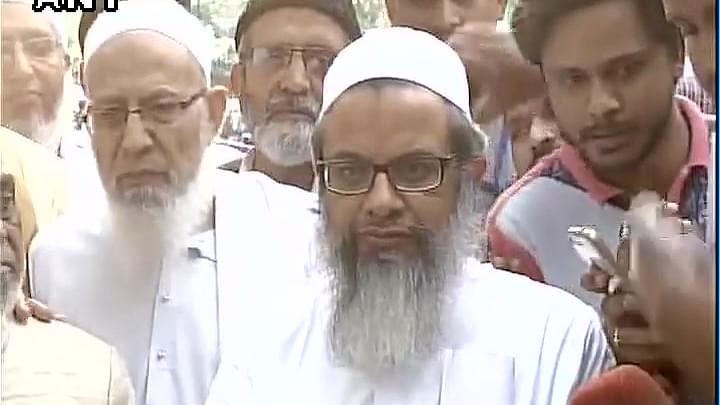 On 9 May, a section of Islamic clergymen led by Maulana Mahmood Madani, general secretary of Jamiat Ulama-e-Hind called on Prime Minister Narendra Modi, in their avowed bid to hold ‘mutual communication’. The Prime Minister and Madani’s group are supposed to have reflected on the issues currently concerning Muslims at large, particularly the triple talaq, at the meeting.

Various media outlets reported that the 25 members of Madani’s group not only met Modi but also praised him and surprisingly hailed his reformative move on the practice of triple talaq, which the Jamiat previously recognised as legal in Islamic jurisprudence. It is, of course, a misconception that all Muslims are against the idea of holding a dialogue with the Prime Minister.

What is true is that they do seek to redress the community’s grievances through dialogue. However, they wished that the Madani delegation did not have so many clergymen and so few (if any) progressive Muslim thinkers.

A couple of hours after the Modi-Madani meet concluded, a Muslim community publication, Milli Gazette (MG), lambasted Madani’s move in a strongly-worded report: “By meeting the Prime Minister today with only a Jamiat delegation, Mahmood Madani group has broken the Muslim ranks”.

Another interesting reaction emerged from within a group that split from the Jamiat's apex body in April 2008. Led by Maulana Arshad Madani, who is also a prominent Deobandi cleric as well as a close relative of Mahmood Madani, this faction has now proposed a 'community campaign' to castigate Modi's meet with Mahmood's group.

The two Madani brothers have long been staunchly pro-Gandhis and equally anti-BJP and anti-Modi. But now, Mahmood Madani, who claims to be the leader of the 'real' Jamiat and dismisses the other, is rejoicing at his group's meet with the Prime Minister. Indeed, in a press release issued by his faction, Madani described the meeting which lasted for about two hours, as "satisfactory” and “positive".

More astonishingly, he hailed Prime Minister Modi for his great reverence for Islam and Sufism, saying, “you made the Indian Muslim communities hold their head high by projecting Indian Muslim community’s ideology of peaceful Islam with reference to India’s tradition of Islamic Sufism and their aversion to extremist ideology".

But this is not what he always said.

Remember the outreach of a 40-member Sufi delegation, comprising of dargah heads, to Modi at his official residence in August, 2015? Much like the latest meet, the Prime Minister was reported to have patiently listened to the proposals and concerns raised by the Sufi ulema with regard to their community then too.

Tellingly, in his meet with the Sufi delegation in 2015, PM Modi pledged “active co-operation” from the central government. The following year, the World Sufi Forum was slated as spiritual Islam’s international summit to curb radicalisation in India. The All India Ulama and Mashaikh Board, founded and presided by the Sufi leader, Syed Muhammad Ashraf Kichchawchchvi, arranged the mega Sufi event in Ramlila Maidan inviting as many as 200 Sufi scholars from across the Eastern and Western world.

The Sufi delegation had requested Prime Minister Modi to directly interact with the Muslims. They maintained that “certain forces” did not want the Indian Muslim community to have good relations with the Prime Minister.

But both, the first Sufi outreach to Modi and the World Sufi Forum were castigated by the Deoband clerics including all of Jamiat’s leaders, only because they were linked to Narendra Modi. They slammed the Sufi event as a political stunt of the Modi government to ‘divide the Muslim community’. At that time, both Mahmood Madani and Arshad Madani spoke in unison: “Sufism is nothing... World Sufi Forum is NDA government bid to divide the Muslims on sectarian lines”.

Now the very Jamiat which vociferously boycotted the Sufis’ meet with the Prime Minister is, to our utter surprise, asserting how Modi heard its group with 'passion' and 'agreed with their concerns'.

Let’s also recall what Madani strongly proclaimed in 2014, as reported in India Today: "Muslims won't back Modi at any coast"... “Modi's acquittal in a particular case does not mean that he is cleared of all charges", said Madani.

So what acquits Prime Minister Modi now of "all charges" that Madani highlighted earlier?

Moreover, the same Madani was angered when the former vice-chancellor of Darul Uloom Deoband, Ghulam Mohammed Vastanvi had praised Modi, then Gujarat chief minister. Deoband’s governing council, Majlis-e-Shura sacked Vastanvi after an uproar of the very clergy who are now silent onlookers of Modi-Madani meet. They despised Vastanvi as a “Modi backer” despite his denial and clarification. Even Maulana Madani, then a Rajya Sabha Member of Parliament, endorsed the Deoband clergy’s rants against Vastanvi’s remarks.

So, keeping the above in mind, one hopes that the government is wary and cautious in dealing with clerics like Madani.

Ghulam Rasool Dehlvi is a researcher in Culture & Communication Studies