What If Rahul Gandhi Does Become Prime Minister Of India 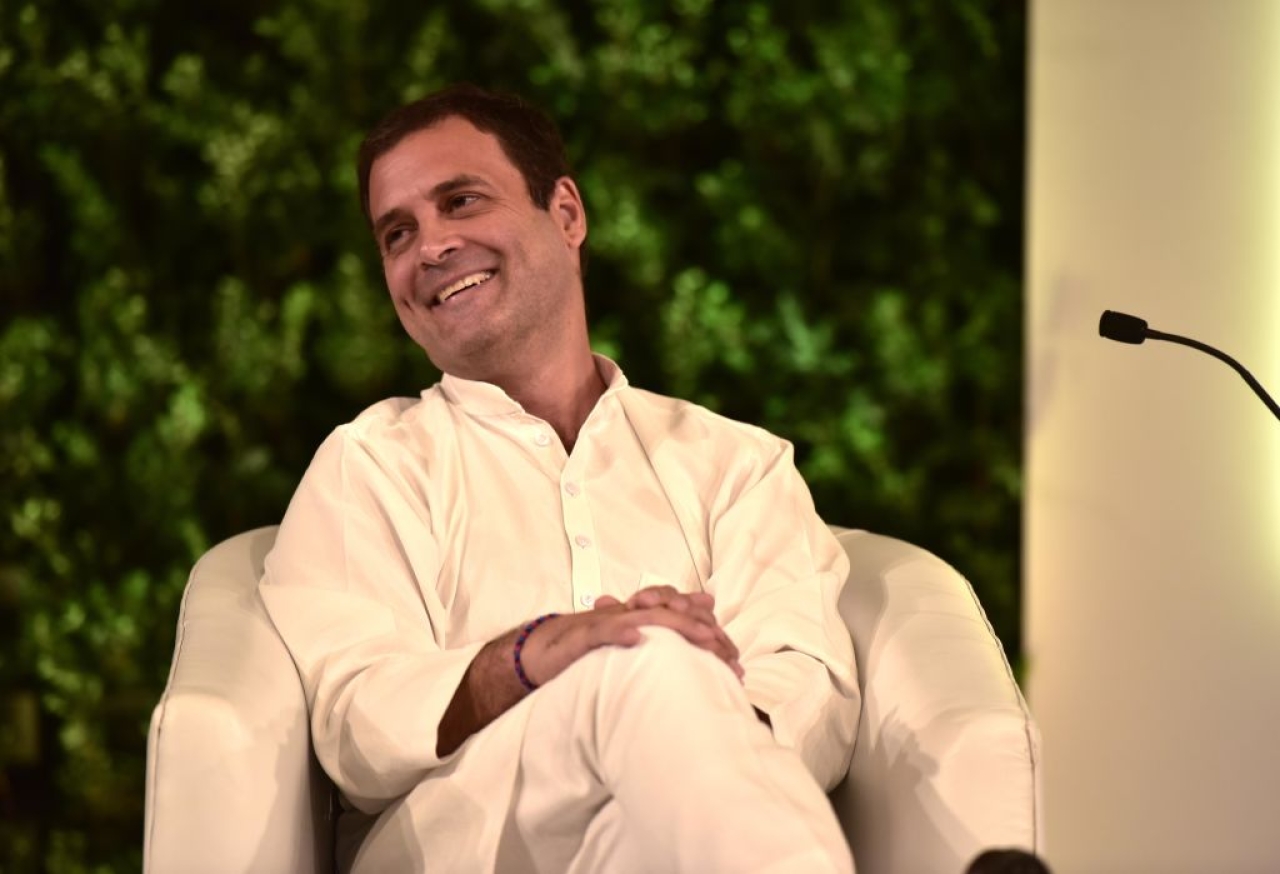 Ever since the Congress party scraped through two state elections and won another last month, the new spring in the step of the assorted elite of mainstream media, Lutyen’s intellectuals and pop culture entertainers is hard to miss.

After years of heralding “the coming of age” of Congress president Rahul Gandhi over non-existent, or ‘moral’ victories, finally these people have a somewhat legitimate cause to celebrate, and if they now think they have a hope of keeping Narendra Modi and National Democratic Alliance (NDA) from getting a second term, one can’t question their enthusiasm.

That said, the above group of elite represents a tiny fraction of the Indian discourse, and an even tinier fraction of the populace as a whole. Therefore, what is good for them may not be necessarily good for us, the people.

While an examination of their motives behind this unstinting support to a leader with so few real achievements is best left to angry twitter debates, the time for a cool-headed examination of what the future would look like if Gandhi and his mahagatbandhan (assuming there is a mahagatbandhan and assuming Congress manages a seat at the table) pull off a victory in 2019, and Gandhi succeeds his great grandfather, grandmother and father as the prime minister of India.

In this context, Gandhi’s opponents have bestowed enormous strategic advantage upon him by constantly projecting him as some kind of a cross between Tom Hank’s character in Forrest Gump and the bumbling lawman in Pink Panther. It is difficult to feel threatened by an opponent constantly projected as slow-witted and goofy.

With this context, it is important to observe some patterns in his behaviour, and predict what it would mean for you and I to have him as our prime minister.

Those of you who grew up in the late 1980s and 1990s, have vivid memories of news about booth capturing and ballot stuffing, and assorted strong arm tactics employed by political parties to win elections. In possibly one of the best advertisement possible for technology, electronic voting machines (EVMs), almost single-handedly delivered the elections from hooliganism and put them back in the reach of ordinary, law-abiding citizens, who until then were cowered by the election-day violence.

Perhaps, not surprisingly, Congress and the opposition have been going after EVM almost from 2014, attributing mischief of machines for their electoral losses. Even after the recent victories, Congress doubled down on EVM malfunctions/ fixing. The elite from media have been providing covering fire to them, as seen here.

What will happen to EVMs if Gandhi becomes the prime minister? What will happen to your voting right if Congress decides to take us back to the twentieth century with paper ballot? Do you live in an area so free of violence that you are confident of your right to exercise your franchise irrespective of the voting method?

Social media was the joker in the pack that caught both Congress and its elite ecosystem heavyweights on the wrong foot in 2014. Since then Congress has improved their social media game considerably, but even today, it is aware of the asymmetry that exists on social media between the mostly ecosystem nurtured, mostly highly-paid or otherwise benefitted supporters on its side and millions of articulate, self-supported passionate individuals fuelling Bharatiya Janata Party’s (BJP’s) machine in the cyberspace.

The groundwork for suppression of social media has been going on for a long time. Mainstream media has made social media a villain even in the murder of a Kashmiri journalist committed by jihadis last year. What will happen to platforms that have called out the many lies of Congress-backed ecosystem if it returns to power? And what will happen to you, if the state perceives you have had too much freedom for their taste?

In spite of being snubbed by the Supreme Court of India, and in spite of being rebutted beyond even a shadow of reasonable doubt by both Finance Minister Arun Jaitley and Defence Minister Nirmala Sitharaman in Parliament, Gandhi has continued to double down upon his Rafale rhetoric.

Surely, his personal animus against Anil Ambani, the chairman of the Anil Dhirubhai Ambani Group, is shocking, even by the standards of Indian politicians. After being stopped from naming Ambani in Parliament by the Speaker of the house, Gandhi tweeted the news of Ericsson asking for Ambani’s arrest (a pure business dispute) linking the Mumbai-based businessman with the prime minister.

The utter disregard for facts and level of hatred for a private citizen are shocking to say the least. Is it too far-fetched to think that once in power, his party would wreck vendetta on Ambani, destroying one of the oldest success stories of Indian business history in the process?

If you are one of the hundred thousand odd employees of the Anil Dhirubhai Ambani Group, is the 2019 election about whether you will have employment after May 2019? There is a proverb that when elephants fight it is the grass that takes the beating. If you are dependent on businesses like Reliance for livelihood directly or indirectly, are you sure you won’t become the grass caught in the stampede of a wild scion?

You only have to look at the apologia by Editor’s Guild of India in the issue of Gandhi’s uncouth comments about ANI editor Smita Prakash to know just how strong a grip Congress has on the mainstream media. Senior journalist Barkha Dutt recently called Gandhi’s many lies on the Rafale, as ‘setting narrative’.

On one hand, Congress has shown unprecedented levels of hostility towards media persons willing to ask them tough questions, on the other hand, a section of Indian mainstream media, to quote BJP veteran L K Advani, has crawled when asked to bend. Call me a cynic, but I have doubts about the fourth estate keeping any future Congress government honest.

Even allowing for some word of mouth marketing, the Ayushman Bharat Yojana seems to be a significant step towards making healthcare accessible for millions of Indians from the lower income households. The scheme has drawn praise from no less than the director general of the World Health Organisation itself.

If Congress returns to power, can it politically afford to continue building on a scheme launched by a man that they insist is a fraud and a crony of corporates? If the change of power in the states in December is any indication, Congress has shown willingness to reverse even innocuous things like Surya Namaskar and Vande Mataram.

Will they leave such a large and visible success story alone? And if Aysuhman Bharat goes, how many people around you can still afford to meet a large health emergency without complete and irreversible personal financial ruin? Once again, remember as the elephants fight, it is the grass that takes the beating. In this fight, whether you are closer to the grass or the elephant should determine which way you lean.

Are you one of those who find BJP’s inability to bring the culprits of various scams/crimes of past as one of its major failures in this term? Well if you are, then you must realise that from National Herald and AugustaWestland to the state-complicit genocide of Sikhs in 1984, will only get buried even deeper with Congress in power.

In none of the three examples I have mentioned above, Congress feels there is even a cause for further inquiry/impartial probe. It has made its thoughts on 1984 pogrom clear by appointing one of the alleged accused as the chief minister of an important state. If you think the ecosystem has made it difficult bringing these cases to conclusion, while being out of power, just imagine getting justice on these when the grand old party is in power.

In many ways, the 2019 election has stakes never seen before in Indian politics. That is why it is important not to look at United Progress Alliance (UPA) 2004 or UPA 2009 as reference points of how a future Congress-led government might behave. Please remember both UPA I and UPA II took place largely before the worldwide upheaval of the old order, assisted in parts by social media.

In India, the old world order, largely represented by Left-dominated Congress saw a string of electoral losses in spite of its stranglehold on the institutions. Whereas elsewhere, the old world order first failed in its attempt to keep Britain within EU, and then later the same year, it lost the American presidential election to a tycoon, who had never held a public office before.

The Left-dominated old world order’s omnipresent scepticism of average citizens (hence their advocacy of large government that interferes in every aspect of citizen’s lives), must surely be at paranoia levels now. Will a desperate, corroded institution continue to play the people’s mandate game over and over, knowing the odds are stacked heavily against them, or will it somehow scrape through it once and then set about changing the system to rig it in their favour forever?

In the US, Democratic Party is already talking about throwing out Electoral College system of choosing president, thus effectively allowing large states like California and Florida to run roughshod over smaller, middle American states. Indian democracy, with its Westminster parliamentary system and large population is even trickier to rule for elite institutionalists.

Unless you are a Congress-Left partisan, who thinks stripping ordinary citizens of their liberties and irreversible corrosion of institutional autonomy is fair bargain for power, you might be better off seeking clarifications on some of the above issues from Congress before voting for them or pressing NOTA or ‘none of the above’, which in the limited context of 2019, is just another symbol for Congress.