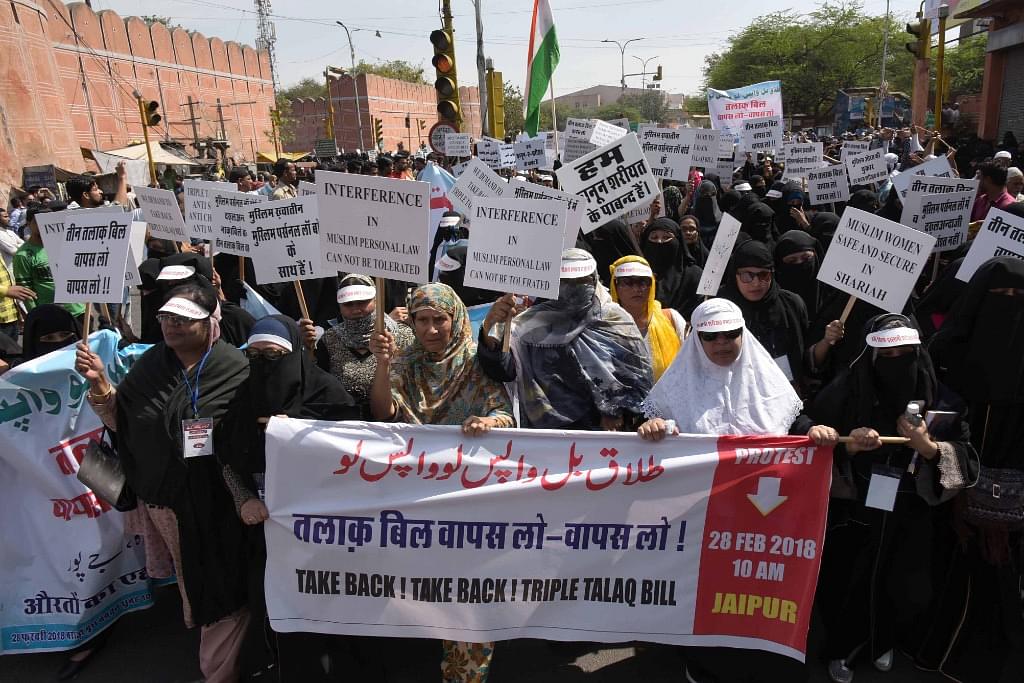 Women led by the women wing of the All India Muslim Personal Law Board take out a silent march in Jaipur to protest against the Triple Talaq bill which they say is anti-Sharia and anti-women. (Prabhakar Sharma\Hindustan Times via GettyImages)

The Muslim personal law board wants to set up Sharia courts in all the districts of the country, and just what does it wish to achieve? The avowed objective of All India Muslim Personal Law Board (AIMPLB) may be promotion of Sharia laws and removal of misconceptions about Islamic laws, but there is more to it than meets the eye. It's not that such matters have come into public domain for the first time. In 2014, the Supreme Court had ruled that Sharia courts have no legal standing, their fatwas are not binding and they are not parallel judiciary. However, the apex court also observed that it depends upon the individuals whether they want to approach Sharia courts or not and whether they want to abide by Sharia judgements or not. The court saw Sharia courts as more of an informal arrangement to settle disputes.

The very mooting of such an idea by AIMPLB is fraught with dangerous consequences and raises disquieting questions. What is the rationale behind setting up Sharia courts to settle personal issues like marriage, divorce, inheritance of property etc when there is already a vibrant, robust three-tier judicial structure established by the Constitution? If the Sharia courts don't entertain criminal cases and don't award punishments as per Islamic law like stoning to death or chopping off limbs, why should they dabble in civil personal laws? Juxtapose the demand for Sharia courts with - the recent Jinnah controversy, sympathy of some minority segments for Afzal Guru and the Rohingyas, support for Break India Brigade from certain quarters, no to yoga and the National Anthem, increasing popularity of parties like the Popular Front of India, Aid and International Development Forum and All-India Muslim League, and their open defiance of the judiciary by asserting that it can't question Islamic laws - and the picture becomes clear.

The common refrain is that Muslims are not feeling secure in India under a right wing Hindu party: they are being charged with fabricated cases of terror and thrashed on flimsy grounds like love jihad, cow and religious conversions. It’s being alleged that constitutional rights of minorities are being trampled down upon in India due to increasing majoritarianism in the country. It cannot be denied there are a few stray incidents substantiating this claim, but the picture that is being painted is also a part of the left liberal secular propaganda that has been vindicated time and again. There is a sense of moral panic as exaggerated narratives are linked to many incidents. The rise of Muslim population in states like Kerala, West Bengal and Assam, and the changing demography in many districts of Bihar and Uttar Pradesh are definitely a cause of concern for a cultural civilisational Hindu majority state like India.

Newt Gingrich, the former US speaker, coined the term stealth jihad in 2010. Stealth jihad does not operate through use of violence and perpetration of terror activities, but makes use of cultural, political, societal and demographic tools to fulfill its agenda of Islamisation. The belittling of mainstream Indian culture and ideology in the garb of secularism and pluralism is a sinister conspiracy on the part of Maoists - radical left Dalit groups - Islamists to take the nation away from its Sanatan cultural moorings and sabotage its civilisational ethos.

The setting up of Sharia courts is stealth jihad and a crude attempt to draw up the blueprint for political Islam in the country. The fact that leading Muslim leaders/intellectuals are endorsing this move or rather maintaining a studied silence is a cause for concern.

Now, let's try to understand political Islam in a layman's language. Political Islam is an ideology that seeks to establish governance, and design state apparatus as per the guiding principles of Islam. It draws inspiration from the Caliphate, the erstwhile arrangement of Muslim rule under which both religious and political authority was vested in a single person. The very idea of political Islam is incongruous with the modern concept of secular democracy, which draws its strength from the Constitution and rule of law. Modern democracies are not expected to provide different set of personal laws for different categories of citizens, but one set of laws that is uniformly applicable to all its citizens. They tend to be inclusive and promote amalgamation. This makes the case for adoption of Uniform Civil Code as provided for under Article 44 of the Constitution all the more urgent in India to promote integration and bring all the minorities into the mainstream.

The shrewdness of political Islam is that it has been making use of the same democracy, the one it wishes to displace, to expand. The Arab Spring of 2011, which began in Tunisia and soon spread to other Arab nations like Egypt and Libya, demanding the removal of corrupt dictators, degenerated into Arab Winter. The subsequent elections that were held in those countries saw radical Muslim groups like the Muslim brotherhood and Salafists capturing power only to impose their own version of radical Islam on the people. Many European nations and the US are feeling the heat of Muslim immigrants as thousands of them are fleeing from the war ravaged zones of West Asia.

The immigrants thriving on largess of the welfare European states have become a threat to the socio-cultural fabric of the local population as there is increased visibility of Islamic symbols all across Europe. The increasing Islamic influx has given a new lease of life to the Political Right in countries like France, Belgium and Germany which is whipping up xenophobia and hatred against immigrants. The problem with immigrant Muslim population is that they abide by local democratic laws till they are small in number, but once their population crosses a particular threshold, they start demanding to be governed by their own Islamic laws.

It's high time the Government of India acts and corrects the distortions that have crept into the secular politics of the country. It must act tough on elements, hell bent upon destroying the socio-cultural unity of the nation, without being bothered by vote bank considerations. The banning of triple talaq, and the proposed ban on polygamy and nikah halala is a welcome step because these are medieval practices that even many Muslim countries have abolished. The Muslim issue will always be a tricky one for India. Because of its monochromatic character that has no space for diversity and alternative views, Islam will always pose a challenge to the inclusive, plural Hinduism that always created space for alternative views, and as a matter of fact, even celebrated and assimilated them.

The Sharia courts will only further the agenda of stealth jihad and lead to Islamisation of this only Hindu dominated country of the world. We all know what happened to countries like Afganistan, Pakistan, Indonesia and Malaysia, which once were within the cultural influence of Indic religions, and are now Muslim countries. Sharia is the first step towards political Islam and it needs to be nipped in the bud. Apart from this, the Government of India must come up with a proper population control policy that strictly implements the two-child norm that can put a check on the demographic change. Constitutional provisions on the cultural, religious and educational rights of the minorities need to be re-examined. Secularism can't be allowed to convert into unabashed minorityism.

The author works as Asst. Registrar with IGNOU. He writes on
contemporary social and political topics.