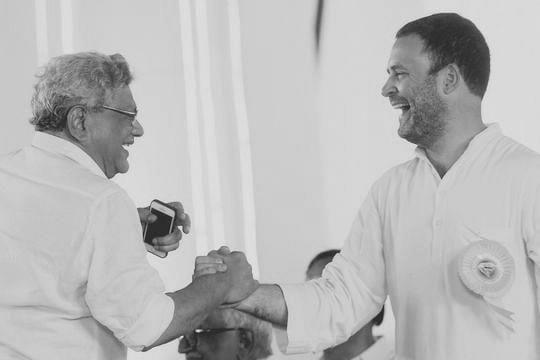 Faced with the imminent prospect of being wiped out from Bengal, the Congress and the communists have, after tortuous and often farcical negotiations, agreed to enter into a pre-poll alliance.

Joining forces, they surmised, would enable them to ward off an electoral rout and even strengthen themselves by consolidating their vote banks.

According to Bengal’s communists and the Congress, an electoral alliance between the two would avoid a split in the anti-BJP and anti-Trinamool votes.

“Such a split will obviously help either the BJP, or the Trinamool. We want to deny them that advantage. A huge section of Bengal’s electorate are completely disillusioned with the Trinamool and its policies, and also do not support the communal and divisive BJP,” said CPI(M) leader and former minister Ashok Bhattacharya.

Congress leader Abdul Mannan said that an alliance will help the Congress and the Left consolidate their positions and even gain new ground among constituents who are anti-BJP and anti-Trinamool.

“The feedback we have received from the ground is that a substantial section of people do not want to support the Trinamool or the BJP. They had supported the Trinamool in the past, but are now completely disillusioned with that party. They also do not support the BJP at all,” said Mannan.

Bengal Congress chief Adhir Chowdhury, who had pushed for the Congress-Communist alliance with his party’s ‘high command’, said that a consolidation of the anti-Trinamool and anti-BJP votes would alter the electoral outcome in Bengal.

“We (Congress and communists) will fight the elections together as allies in order to win the elections, not emerge as the first or second runner-up,” he said.

The leaders of the two camps cite the results of the 2016 elections when they had an ‘electoral understanding’. The Congress won 44 seats and the Left won 33, including one Independent that it backed who won from a constituency in Malda.

But, they point out, the Left (including some allies like the RJD, the JD-U and NCP) emerged as the runner-up in 149 seats while the Congress occupied the second position in 41 constituencies.

“Some of the Left and Congress candidates were defeated by very narrow margins. It must be remembered that we did not contest the 2016 elections as allies. We simply had a seat-sharing arrangement. Hence, in many places, the anti-BJP and anti-Trinamool votes got divided,” said Chowdhury, who is also the Congress leader in the Lok Sabha.

As per Chowdhury’s reckoning, over the past five years, disillusionment with the Trinamool has intensified and more and more people are turning away from the now ruling party.

“The BJP’s policies at the Centre and its anti-people measures like bringing in the farm laws, abolition of Article 370, the CAA and NRC and many other acts have alienated many sections of the electorate in Bengal,” he added.

Hence, say the communist and Congress leaders, there exists a huge space for anti-Trinamool and anti-BJP forces in Bengal.

“Our fighting together as allies will lead to a consolidation of these (anti-Trinamool and anti-BJP) forces. The Assembly elections will throw up a huge surprise,” said Left Front chairman Biman Bose.

But all these surmises may turn out to be faulty. That’s because the political landscape in Bengal has undergone a change over the last five years.

The BJP, which was a minor party then, had managed to win only three seats and garnered a 10.16 per cent vote share. But just three years later (in the summer of 2019), it won 18 of the 42 Lok Sabha seats from Bengal and its vote share went up to 40.64 per cent.

The Congress, in contrast, won just two Lok Sabha seats and its vote share plummeted to 5.67 per cent. The Left came a cropper and could not win any seats while its vote share went down by 16.72 percentage points (as compared to the 2014 Lok Sabha polls) to 6.34 per cent.

Since mid-2019, the BJP has gained more ground in Bengal. A huge number of functionaries from the Congress and the Left, including its sitting and former MLAs and MPs, have joined the BJP.

Also, a lot of political polarisation has taken place over the last one-and- a-half years and the state’s electorate is largely divided between the Trinamool and the BJP.

Both the parties have been carrying out aggressive political campaigns while the Congress and the communists have been in a political slumber.

The Congress or the Left are simply not seen as viable alternatives by even voters who may have grown disillusioned with the Trinamool. Those who have turned against the Trinamool are most likely to cast their lot with the BJP, say political observers.

Also, the campaign to portray the BJP as a ‘communal’ and ‘divisive’ force by the Congress, communists and the Trinamool has not succeeded.

This is evident from the growing grassroots-level support for the saffron party across the state.

The communists and the Congress simply do not have the resources to match the BJP or the Trinamool and, hence, can only hope to get the votes of their committed voters who, anyway, do not form any substantial chunk in most parts of the state.

“People do not vote for parties or alliances which they think will not win. Only committed voters do so. Unfortunately for the Congress and the Left, they are perceived to be only marginal forces in Bengal, where political polarisation between the BJP and the Trinamool is near-complete,” said political analyst Biplab Dey.

Going by the 2016 poll outcome is highly flawed, Dey added. Many Congress and Left MLAs had, within two years of the elections, joined the ranks of the Trinamool. And over the last two years, many have also joined the BJP.

Also, memories of the 34-year-long Left misrule in Bengal are still fresh in the minds of the people. “People haven’t forgotten all the misdeeds of the Left that saw them being booted out of power,” said political commentator Krishnendu Chatterjee.

“People see the same set of old Left leaders who were the faces of all that was wrong with Left rule over Bengal. There are no fresh faces in the communist camp who can personify a departure from the past in the minds of the electorate,” said Chattrerjee.

The Congress also suffers from the same image problem. “All Congress leaders are greying and mouth the same rhetoric. After having been out of power for the last 44 years in Bengal, they suffer from lack of credibility,” Chatterjee added.

Also, the communist-Congress alliance is viewed as an ‘unprincipled’ one. That’s because the Congress was the principal opposition in Bengal during the Left rule till Mamata Banerjee walked out of the party and formed the Trinamool in 1998.

“Entering into an alliance with a former political adversary, and when that alliance is not founded on any principles but opposition to other parties, is completely unprincipled. Voters are mature and can understand that,” said CPI legislator Ashok Dinda who has joined the BJP.

The Congress-communist alliance is, thus, unlikely to cut much ice with the electorate. Even in the Congress’ traditional strongholds like Malda and Murshidabad, where the party won 22 seats in 2016, the political ground has shifted dramatically since then.

First, it was the Trinamool which started chipping away at those Congress citadels and ultimately weaned away a large number of functionaries, including very senior leaders.

The BJP started doing the same over the last one year and the Congress is a pale shadow of its former self in those bastions.

The Left wins in 2016 were spread more or less evenly across the state and it picked up one to three seats in most districts with the exception of Bardhaman — its erstwhile stronghold — where it managed to win five seats.

But since 2016, the political ground in Bardhaman has also shifted a lot and the Left no longer enjoys much political support. Most committed Left voters are either too old to go to the polling booths, or have passed away.

Thus, the Congress-Left alliance is not likely to cut much ice among the politically polarised electorate of Bengal. The fight is between the incumbent Trinamool and the BJP and despite the brave and optimistic predictions by communists and the Congress, their parties will most likely be unable to alter the outcomes in most constituencies.