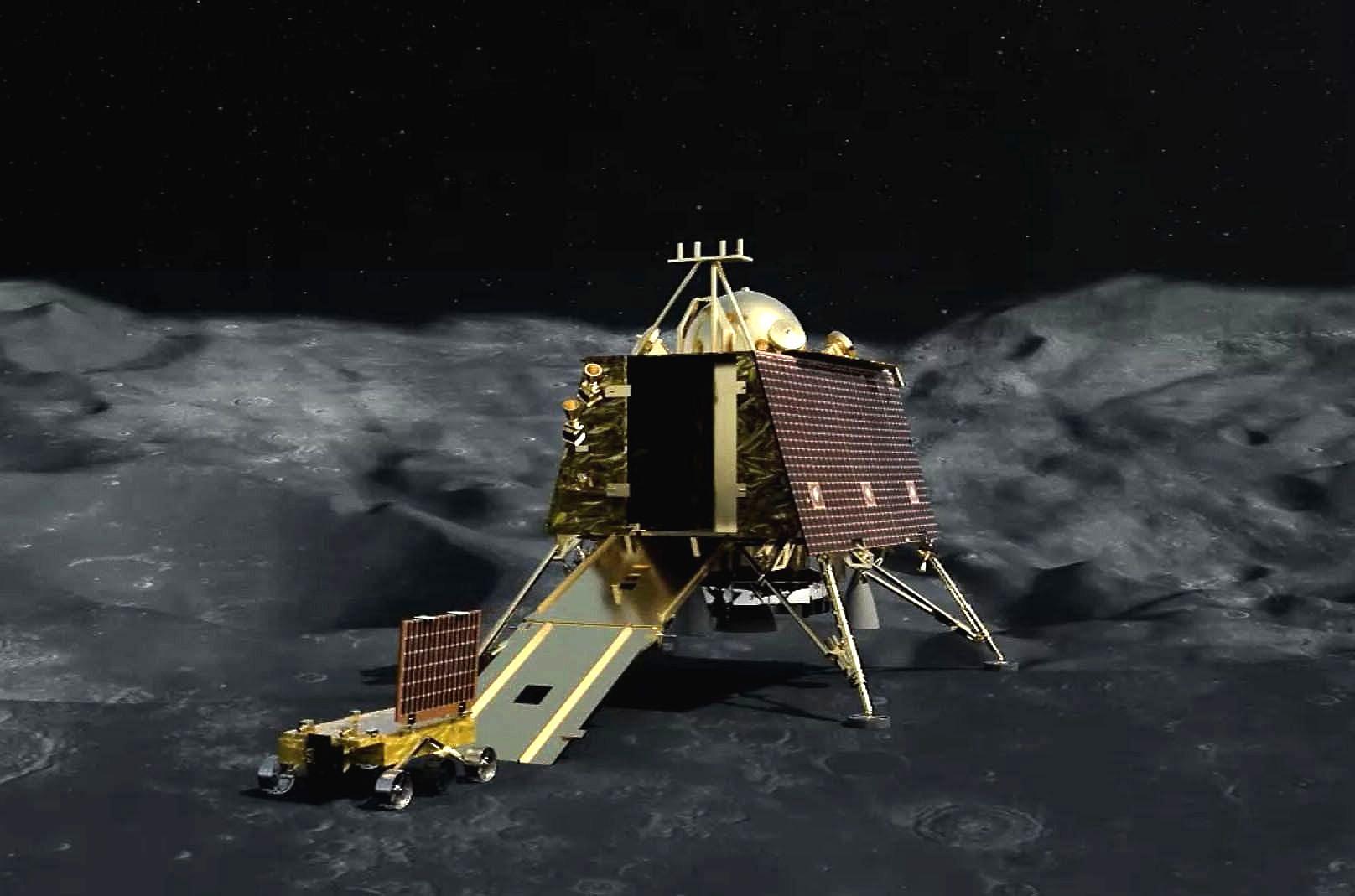 An artist’s impression of the lunar lander on the moon’s cratered surface. (ISRO)

On 20 August, nearly a month after its majestic lift-off atop Geosynchronous Satellite Launch Vehicle Mark-III, Chandrayaan-2 had started orbiting the Moon. Almost two weeks and multiple manoeuvres later, its lander—Vikram, named after Vikram Sarabhai, the father of the Indian space programme—separated from the orbiter, kicking off a six-day countdown for the Moon landing.

The separation, which made the lander independent for the first time since the 22 July launch of Chandrayaan-2, was conducted autonomously. Earlier in the day, the mission controllers had loaded the required commands.

After the separation, both the lander and the orbiter were located in the 119 km (perilune, the closest point from moon) x 127 km (apolune, the furthest point) orbit achieved after the fifth and final Moon-bound (orbit-lowering) manoeuvre conducted on 1 September, a day before the separation.

On 3 September, the first deorbit manoeuvre was performed to lower the lander’s orbit to 104 km x 128 km. This manoeuver, lasting around 4 seconds, was a test burn of the lunar lander’s propulsion system. The test burn was followed up with the second, 6.5 seconds-long deorbit manoeuvre on 4 September to bring the lander to a 35 km x 101 km orbit around the Moon.

The two manoeuvres, which have taken the lunar lander closer to the Moon, were performed using the lander’s on-board propulsion system which comprises of five 800 Newton (N) throttleable engines (four on the corners and one in the centre) and eight 50 N control thrusters.

India had to develop the lander indigenously after Russia, which was to build the lander under the original plan, backed out. Given the mass of the lander, the propulsion system on-board was required to produce thrust of around 3.2 to 4 Kilonewton. To make such an engine, ISRO would have had to go back to the drawing board — a move that could have delayed the mission.

ISRO decided to use the existing technology instead. This was done by enhancing the thrust level of its Liquid Apogee Motor (LAM), which has a 440 N thruster, to 800 N. ISRO uses 440 N LAMs to manoeuvre its satellites in space.

In the initial phases, the plan was to have just four 800N engines on the lander. The fifth engine was added, along with a change in the mission configuration, to “mitigate upward draft of dust towards the craft while it is landing”.

Changes in the mission configuration, which increased the weight of Chandrayaan-2 with the addition of new hardware, were made after it was found that the landing profile was “not conceived in the most optimal way".

When the lander reached the 35 km x 101 km orbit on 4 September, it continued to go around the Moon for two days while ISRO checked its critical parameters. Under the original plan, before the changes in mission configuration, the lander was not required to orbit the moon before starting descent.

Around 1 am on 7 September, the lander, carrying the rover in its belly, will commence its powered descent to the lunar surface. The journey, which will last a little over 15 minutes, is the trickiest part of the mission — something the Chairman of ISRO, Ki Sivan, describes as the “15 minutes of terror”.

Again, the lander’s onboard propulsion system will be put to use. Four 800 N throttleable engines (thrusters) on the four sides of the lander will fire in tandem to provide the braking thrust required for decelerating the lunar lander.

The thrusters will be fired in the direction of the movement of the lander to slow it down. In simple words, these engines will provide thrust opposing the motion of the lander, thereby causing it to decelerate gradually.

Deceleration would be achieved broadly in three phases — rough braking, precision or fine braking, and vertical descent or final braking, in that order.

Meanwhile, the eight 50 N thrusters will ensure the lunar lander has the required orientation during the descent phase and steer it to the right spot.

The lander will use on-board devices such as the Hazard Detection and Avoidance system (HDA) to study the landing site for safety and accuracy. Various sensors will feed critical data, related to velocity, acceleration, orientation etc. into the HDA system for it to make the required changes in trajectory if and when required.

Using the data obtained, the lander will autonomously determine the trajectory it will have to take to get to its pre-determined landing site.

If the engines are not cut off before the lander reaches the lunar surface, its exhaust plumes will kick up Moon dust. The dust, along with the backflow of exhaust gases from the engines can, among other things, harm parts of the lander, including the sensors and scientific instruments it is carrying.

The lander is expected to touch down between two craters, Manzinus C and Simpelius N, about 70 degrees south of the lunar equator. If it manages to soft-land at this point sometime around 7 September, it would have reached closer to the moon’s south pole (around 600 km away) than any previous mission.

Four hours after its soft landing, the lander’s ramp will open, making a passage for rover Pragyaan to drive off to the lunar surface to carry out experiments.

The lander, which will remain stationary at the site, and the rover, which is capable of moving around, are designed to last at least 14 days, equivalent to one lunar day. Once the sun sets at the landing site, the vehicles will have no power and the temperatures will plummet to near -183 degrees Celsius.

Also Read: Why ISRO Is Going Where No One Has – Near Moon’s South Pole