Quantum Computers: Why They Are Hard To Build — And Worth The Effort 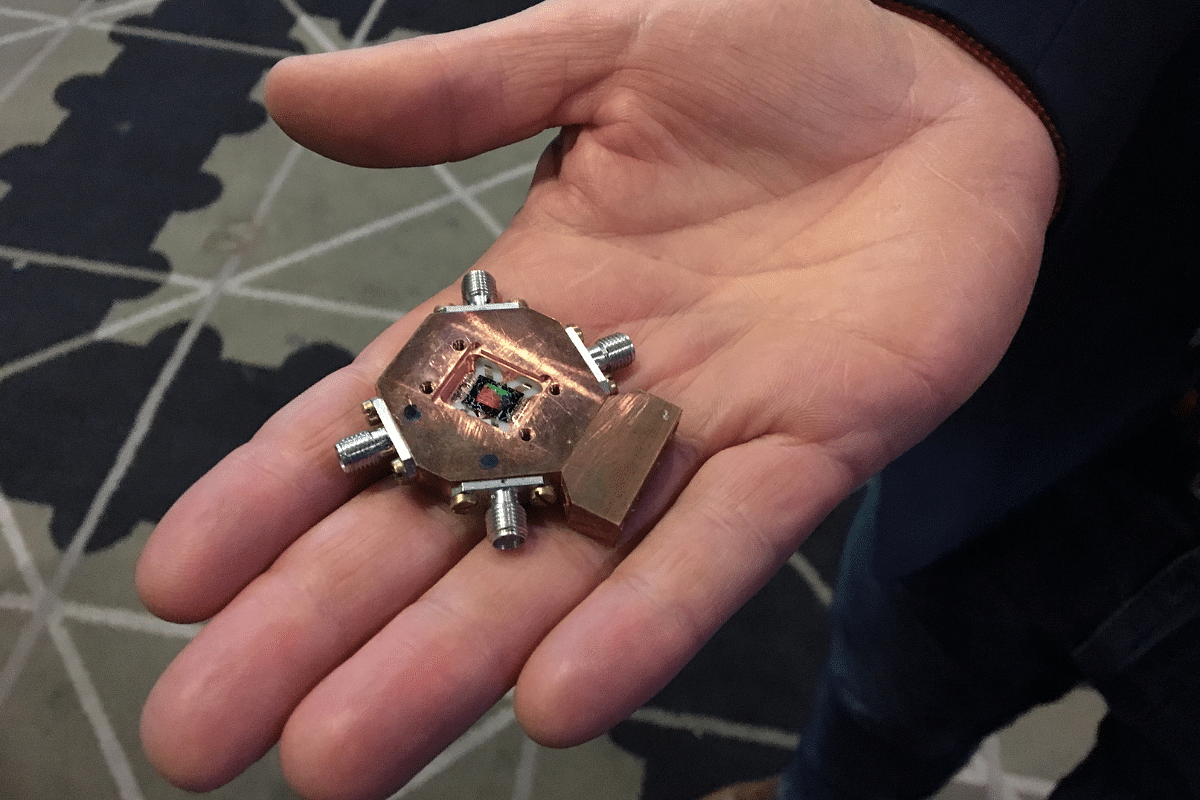 A quantum processor, for a quantum computer, with three quantum bits (qubits) and three read-out cavities, fabricated in May 2017 at the Nanofabrication Laboratory at Chalmers University of Technology. (Photo: Anita Fors (Chalmers)/Wikimedia Commons)

This is Part 2 of the two-part article on quantum computing. Read Part 1 here.

Present-day systems are protected by Rivest-Shamir-Adleman (RSA) encryption, which is based on the fact that it is practically impossible for classical computers to factorise large integers.

Peter Shor surprised the world with his polynomial-time quantum algorithm, which made it theoretically possible for a quantum computer to factorise large positive integers, thereby putting present-day encryption, and hence computer and communications systems, at risk.

A quantum computer powerful enough to run the algorithm to factor large integers may be several decades away, but the effort to build the next generation of encryption schemes resistant to a breach using quantum computers is already ongoing.

There are two approaches. The first one, called post-quantum cryptography, is based on constructing classical cryptographic algorithms that are hard for a quantum computer to break.

The other approach — quantum cryptography — is to use the properties of quantum mechanics itself to secure data.

Keys are large binary strings of numbers used to provide security to most cryptographic protocols, like encryption and authentication. Though classical key distribution algorithms like Diffie-Helman provide the secure exchange of keys between two parties, they will be vulnerable in the future to quantum computers.

The first QKD scheme was proposed by Bennet and Brassard in 1984. It is called the BB84 protocol and is based on Heisenberg's Uncertainty Principle. The basic idea for this protocol is that Alice can send a secret key to Bob encoded in the polarisation of a string of photons. If an eavesdropper tries to intercept and read it, the state of the photons will change, revealing the presence of the eavesdropper.

Why Are Quantum Computers Hard To Build?

Qubits, unlike classical bits, need to interact strongly among themselves to form entangled states, which in turn form the basis for computation in quantum computers. But to achieve this experimentally is incredibly hard.

We don't want qubits to interact with the environment because it causes decoherence. Decoherence is the phenomenon due to which quantum effects are visible in the microscopic world, but not in the macroscopic world. The main difference between classical information and quantum information is that we can’t observe a quantum state without damaging it in some uncontrolled way. We may not look at quantum computers all the time; nature continuously interferes with them. That's why the information the quantum computer is processing needs to be almost isolated from the outside world.

Why We Believe Quantum Computers Can Be Built

Since Richard Feynman's talk 40 years ago, we have come a long way, but the quantum computers present today are not very useful yet.

We are presently in the NISQ era of quantum computers. NISQ stands for 'Noisy Intermediate-Scale Quantum'. 'Intermediate scale' means that the qubit count is greater than 50 and it cannot be simulated using the most powerful classical supercomputers. 'Noisy' means that these devices are not yet error-corrected.

Through the discovery of polynomial-time factorisation and discrete logarithm algorithms by Shor, the interest in quantum computing skyrocketed, but scepticism regarding quantum computing remained, captured in the saying that it is “the computer scientist’s dream [but] the experimenter’s nightmare".

Again, it was Shor who showed the way. He discovered quantum error-correcting codes and fault-tolerant methods for executing quantum computations reliably on noisy hardware.

The discovery of error-correcting codes showed that we will be able to scale up quantum computers to the degree that they can solve practical problems, but we will need a lot more qubits and a lower inherent error rate before any such correction is useful.

Google plans to build a full-scale quantum computer by 2029, one that can be used for solving practical business problems. Companies like IBM have laid out technology development milestones to develop a scalable and fault-tolerant quantum computer.

Startups are not falling behind in investment. Several millions of dollars are invested into startups like Rigetti computing, IonQ, Xanadu and PsiQuantum to develop quantum computers.

Similarly, China has included quantum technology as one the high-technology investment areas in its 14th five-year plan. India too has announced a National Mission on Quantum Technologies & Applications (NM-QTA).

Quantum Technology In India, In Brief

The Indian government in its 2020 budget announced the Rs 8,000 crore ($ 1.2 billion) NM-QTA. The mission aims to focus on fundamental science and technology development, and to help prepare the next generation of workforce, encourage entrepreneurship, and address issues concerning national priorities.

Not long ago, DRDO demonstrated QKD between Prayagraj and Vindhyachal in Uttar Pradesh over a 100 km fibre optic link.

ISRO, on the other hand, demonstrated quantum entanglement-based real-time QKD over a 300 m atmospheric channel. This is a step towards the development of the planned satellite-based quantum communication (SBQC).

Efforts at building a quantum computer in India presently seem to be limited to academic efforts.

Noise severely limits the scale of computations in NISQ-era devices. We expect to overcome this issue in the long run using quantum error correction and fault-tolerant quantum computing (FQTC), but the number of qubits required to run these error-correcting schemes is very high and depends on the algorithms we are trying to run and the quality of the hardware.

Present-day quantum computers are not capable enough to replace supercomputers, given the fact that the scaling of the number of qubits remains a challenge.

This concludes the two-part article on quantum computing. Read Part 1 if you haven't already.

Biswa Prakash Mishra is a Master's student in engineering physics. He has an interest in physics, artificial intelligence, and science in general, and can be reached on Twitter at @biswaprakash14.
Get Swarajya in your inbox everyday. Subscribe here.
Tags: