Why ISRO’s Latest Launch Was More Significant Than You Thought 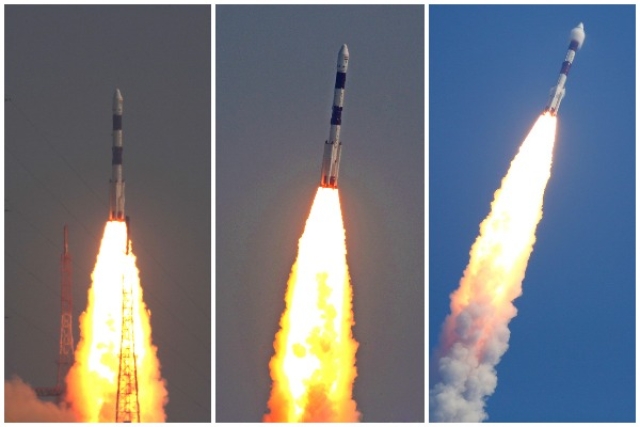 Just days after India demonstrated its anti-satellite capabilities, the Indian Space Research Organisation (ISRO) has successfully put into orbit an EMISAT satellite built by the Defence Research and Development Organisation and 28 CubeSats from foreign customers onboard its third generation workhorse, the Polar Satellite Launch Vehicle (PSLV). This was PSLV’s 47th mission to space.

And while the launch looked similar to other satellite launches by ISRO, there are reasons why it was more significant than most of those.

One, the 436-kilogram EMISAT, PSLV C-45’s main payload, is an intelligence gathering satellite. It has been launched into a circular sun-synchronous polar orbit, at an altitude of 749 kilometers. Based on the Indian Mini Satellite 2 bus platform and equipped with solar panels providing 800 watts of power, the satellite carries Kautilya, an ELINT package developed by the Hyderabad-based Defence Electronics Research Laboratory.

ELINT, or intelligence-gathering by electronic means, involves monitoring of radio signals and using them to determine its nature and the precise location of the source of its transmission. By some accounts, the satellite will be able to locate enemy radar installations deep inside hostile territory.

An ELINT system records the radio frequency (RF) signature of a radar, which can then be used to identify and locate it in future encounters, and to test and develop jamming techniques to counter the radar. The signature parameters of an enemy radar captured by ELINT can be used for identifying the role of the radar as part of a larger system and preparing an Electronic Order of Battle.

Two, a new configuration of the PSLV, called QL, debuted with this launch. In this version, four solid rocket boosters have been mounted around PSLV’s core stage. In its other avatars, the PSLV has been launched with zero, two, or six boosters.

Three, for the first time, the liquid-fueled fourth stage of the rocket, which is also called the last stage or the upper stage, has been equipped with solar panels to generate power beyond the limitations of the batteries.

According to reports, ISRO has been gradually introducing additional support systems in the fourth stage in the last three PSLV launches.

Four, this is the first time a PSLV carried out three orbital missions in a single flight. In other words, payloads were placed in three different orbits.

First, the EMISAT satellite was deployed in an orbit 749 km above Earth’s surface. Then, the fourth stage of the PSLV manoeuvred into an orbit 505 km above Earth by firing its engines twice and released the 28 nanosatellites from the United States, Lithuania, Spain and Switzerland packed inside its spring-loaded modules. Following this, the fourth stage reached the 485 km orbit for the three experimental payloads it was carrying.

Five, usually, after putting satellites into orbits, the fourth stage of the rocket turns into debris. However, in case of PSLV C-45, after the separation of the last payload, the fourth stage of the rocket will maneuver to the final orbit and act as a platform for up to six months for three experimental payloads — Automatic Identification System (AIS), Automatic Packet Repeating System (APRS) and Advanced Retarding Potential Analyser for Ionospheric Studies (ARIS). The solar panels attached to the fourth stage will provide power for the experiments.

AIS, from ISRO, will be tested for collecting messages transmitted from ships at sea and relaying them to ground stations. It may find application in future satellites ment for maritime surveillance. APRS, a digital repeater built by the Radio Amateur Satellite Corporation of India, will be used to help amateur radio operators in tracking and monitoring position data. ARIS, a plasma and electrostatic instrument from Indian Institute of Space Science and Technology, will be used for the structural and compositional studies of ionosphere.

Six, in a major boost for private players, over 95 per cent of the hardware used for this PSLV mission was fabricated outside ISRO.

“In fact the payload for this particular satellite is fabricated in one of the electronic industries in Bengaluru," ISRO chief Kailasavadivoo Sivan said.