General Qamar Bajwa: All You Need To Know About The General Who (Re)Appointed Himself 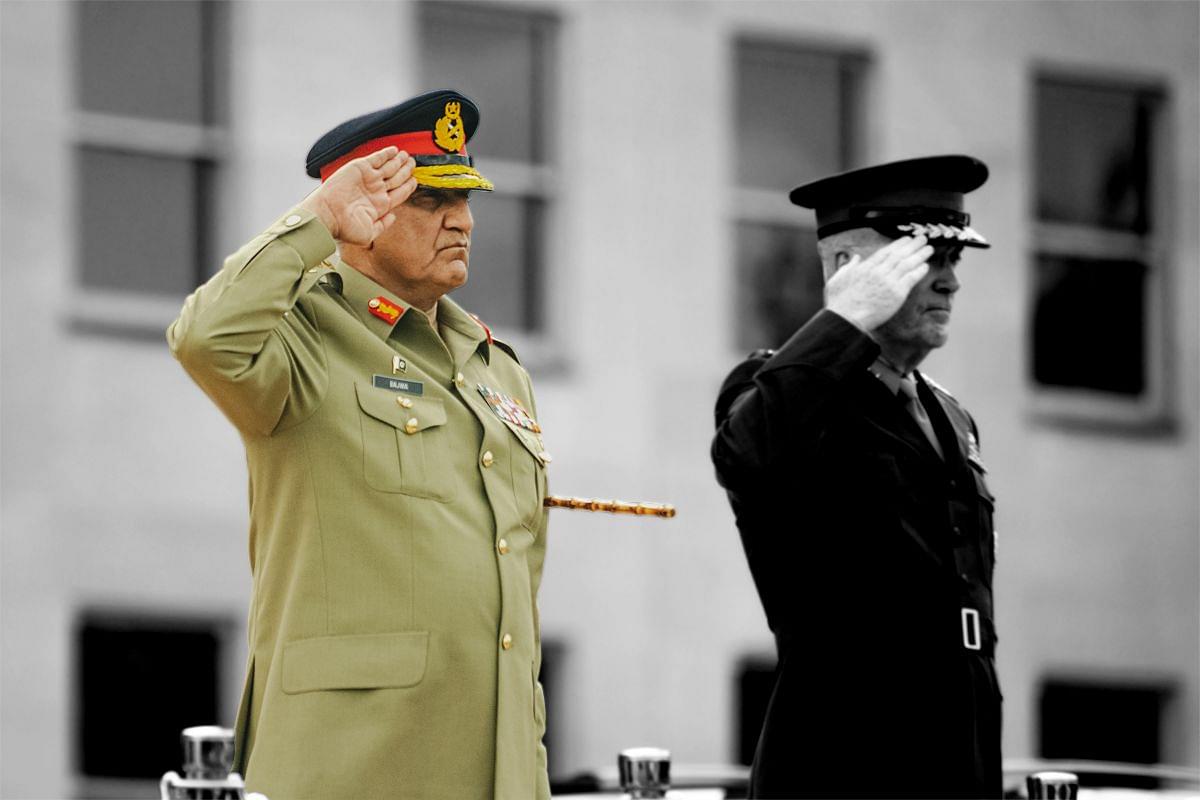 If I had to write the annual confidential report of General Qamar Javed Bajwa at the end of his first avatar as Pakistan Army Chief, it may have commenced as follows — “a wily officer, capable of working for himself as much as he works for the organisation…”. That sums up the character of Pakistan’s senior-most officer.

Bajwa was appointed Pakistan Army Chief in November 2016 to succeed General Raheel Sharif, who was considered much more hyper by personality and an avowed India baiter.

However, he did not push for extension of tenure like his predecessor General Parvez Kayani, and retired to the lucrative appointment of the Commander-in-Chief of the Islamic Military Counter Terrorism Coalition, Riyadh.

Bajwa had better plans for himself.

Highlighting the situation on the borders and the region as severely challenging to Pakistan’s security, he approved a three-year extension for himself as Pakistan’s Army Chief.

Theoretically, it is the Pakistan prime minister who appoints the army chief. Since Imran Khan is known to be a protege of his own Army Chief, he played an inconsequential role in according that extension.

Bajwa’s extension will upset many an ambition among Pakistan’s senior hierarchy. Change of an army chief manifests in many ways; one being the exit of a coterie of favourites and arrival of another. But that won’t happen here.

Bajwa tried to be different in the early part of his tenure before sinking into the routine affair of extending the Pakistan cause on Jammu and Kashmir (J&K).

I had monitored his rise from the rank of Brigadier simply because I trusted the opinion of a colleague from the Indian Army’s military secretary’s branch who happened to be a rare serving officer to visit Pakistan as part of a goodwill delegation almost 12 years ago.

He came back and informed me that he met this tall Pakistani brigadier, who was quite different to his colleagues; his utterances appeared to speak of possibility of peace with India and economic development of Pakistan as the main challenge ahead.

One studied his background and on him being appointed the Pakistan Army chief expected that there could be a welcome change. Having had three tenures in Pakistan-occupied J&K (PoJK) in crucial appointments, the futility or inevitability of continuing the proxy war would largely fall to him to decide.

To say that General Bajwa disappointed me after a brief initial positive impression, would be an understatement. He actually let down my own sense of assessment.

Usually machismo may demand false military notions of domination and some robust trans-LoC exchanges as the new Pakistan Army chief takes over. It would be in everyone’s interest if some time is given to Gen Qamar Bajwa to make his assessment, send messages through the hotline that Pakistan may wish to re-appraise its policy vis-a-vis the LoC and await response. I think there may be a chance that Gen Bajwa may just turn out to be different. The experience as GOC 10 Corps may have tempered him into the futility of the breaches of ceasefire. To expect anything on the sponsorship of proxy war may be a little too much; one step at a time will be a good policy.

To say that Bajwa did not try may not be right. One could not expect him to straightaway start smoking the peace pipe. He would attempt to wrest moral ascendancy from the Indian Army on the Line of Control (LoC) in a gesture of machismo before he would rest on his oars.

He did make references to peace with India and that is how the Bajwa Doctrine confused everyone; it is dead and buried for now. Its whole idea was to confuse with the typical Pakistan Army strategy of ambivalence.

However, Bajwa hoped to get an opening somewhere by which he could look towards a lowering of temperature in J&K to allow Pakistan more time to focus on its economy and on Afghanistan which he knew was Pakistan’s trump card in its quest to remain strategically relevant for the international community.

A return to J&K later was always possible since Pakistan had all along followed the strategy of calibration.

The tanking Pakistan economy and the failure of the China Pakistan Economic Corridor (CPEC) to deliver at expected speed on the economic front probably changed things in his calculus. His personal ambitions to remain in a position of power also started increasing.

February 2019 changed a lot of things. It was probably a calculated risk he took with Pulwama. He managed to use his Inter Services Public Relations (ISPR) wing to spin a perception that India’s Balakot attack had led to an advantage for the Pakistan military.

The focus returned quite irretrievably to J&K. Alongside that came President Donald Trump’s perception that without a full and final withdrawal of US troops from Afghanistan, his chance at re-election in 2020 was not going anywhere, and Pakistan was the key to that.

To top it all a new much stronger government got elected in India in May 2019 and the chances of it following a more confident policy on J&K started to emerge.

While Pakistan had to display to international monitoring organisations its sense of commitment towards dismantling the infrastructure towards support to radical and terror related organisations, its strategic relevance had to be maintained.

Bajwa was left with the unenviable task of keeping Afghanistan and J&K in the focus, both simultaneously. This is something Pakistan has tried to avoid to remain focused on one at a time.

Prime Minister Imran Khan quite clueless in the ways of governance and especially in the domain of national security, relations with the international community and most importantly with India, found Bajwa a virtual mentor.

Imran Khan anyway owes his ‘selection’ to the Pakistan Army Chief and has now outsourced every facet of national security and almost all governance to him.

The unprecedented step of taking the Army Chief along for his official visit to the US was really the final stamp on the certification that Imran Khan is Bajwa’s man and not the other way round.

The most important issue now is how Bajwa will handle J&K. He has already stated – “Pakistan will go to any extent to support Kashmiris, immaterial of the cost involved”.

Pakistan has pulled out the stops almost completely in trying to retrieve initiative after the Indian government’s recent landmark constitutional and administrative decisions.

Although a new narrative is being put out by Indian leaders on PoK and Gilgit-Baltistan being the only remaining issues on the agenda, Pakistan is making every effort to internationalise the issue.

It received a misinterpreted message from the US President that the US would be ready to mediate on J&K, forgetting the aspect of ‘bilateralism’, which is enshrined in the Shimla Agreement of 1972 to which Pakistan is a signatory.

Three prominent former diplomats of Pakistan have made an unprecedented statement supporting the employment of sub-conventional violence to keep intact the Pakistan perceived aspirations of the people of J&K.

All the above appears to indicate turbulent times ahead in the subcontinent.

Pakistan appears unmindful of its state of economy in its efforts towards ratcheting tension with India.

However, Bajwa knows that conventional war is not an option and India is internationally better networked than it ever was before. In the short term, it’s the United Nations General Assembly session commencing in September 2019 that is in focus.

He will wish to ensure that J&K does not disappear from focus; triggered violence at the LoC and the hinterland will ensure that.

The Taliban is not being helpful by increasing turbulence in Afghanistan. It is going to be a real challenge playing on both flanks and Pakistan could well end up being sandwiched through its own doings with few options available to retrieve itself.

Another major incident in J&K will invite muscular response from India and none can predict what that may be.

For General Bajwa, the only way out at the moment is to continue working on J&K but at slightly lower temperature to prevent any triggers that would force India’s hand.

He will need to convince the Taliban that its activities are not helpful towards maintaining any positive stance towards talks with the US. The 30-minute Trump-Modi discussion must also be causing some speculation in Pakistan.

For the moment it is a moral advantage that India enjoys but the speed at which things change in the subcontinent always remains unpredictable.

By ‘reappointing’ himself as the Pakistan Army Chief, General Bajwa has resolved only one issue. That is the fact that Imran Khan does not have to govern Pakistan or find his faculties to do that; General Qamar Javed Bajwa is at hand to do that, in a role covering every sphere of national functioning.