Lee Kuan Yew – The Last Of The Asian Lions 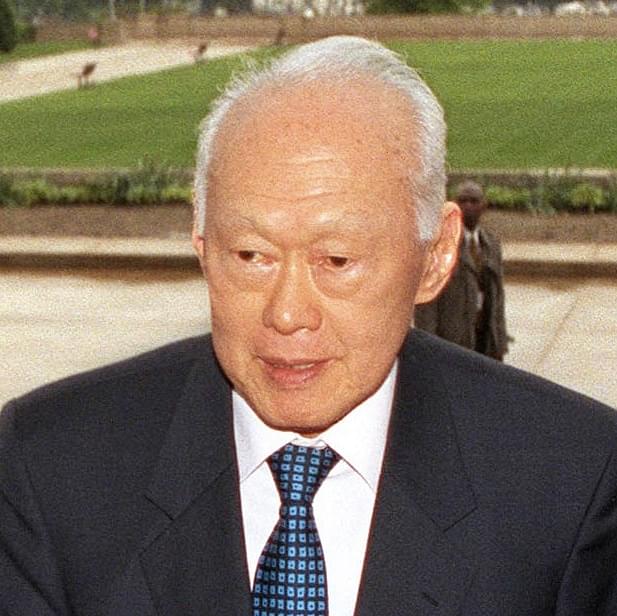 Lee Kuan Yew passes on to his rightful place in the heavens. If ever there was a statesman who blended the ideals of Dharma, Confucius and Tao into one and who, with his iron will, created a prosperous state from an island of nothing, it was he.

Lee Kuan Yew started his politics as a socialist, inspired by the likes of Gandhi and Nehru amongst others, and then responded magnificently when the then Malaya Federation threw out Singapore. Lee worked tirelessly to build a nation based on competence, efficiency, growth and equality while maintaining the character and diversity of Singapore.

He did that because he was not a prisoner of any ideology, but was a wonderfully pragmatic man. He understood the basic nature of the challenges he faced and made his choices accordingly. A keen student of human behavior and civilization, he was able to utilize his razor sharp intellect to discern from every political ideology and economic theory that which was right for Singapore. Once he made his choice, he followed it through with a focus and determination that is legendary.

If you reflect on the state of affairs of the ancient city-state of Dwaraka, and the principles enunciated in the magnum-opus of Kautilya Chanakya’s Arthashastra, you would find their resonance in modern Singapore. Lee Kuan Yew was the man who made that resonance happen. From being a small harbor town, Singapore went to being one of the modern world’s mightiest, most dynamic, prosperous and efficient city-states.

To his everlasting credit, his was not a myopic view based on ethnicity, but a pragmatic assessment of the situation. He was not without faults, given his penchant for authoritarianism and over-emphasis on material success. Despite that, he was a much-loved and respected leader of his people because his commitment to them was total, his rule was always impartial and was one based on equal opportunities for all races and no had no room for appeasement for any one section.

The Singapore story is one that in its essence, is about how a visionary leader, steeped in pragmatism shaped the course of events to deliver to his people a state that provided a level of comfort, security and prosperity that was felt by every citizen in a personally. It is also a story of a parliamentary democracy with Chinese characteristics – to borrow a phrase from the other pragmatic Chinese Titan Deng Xiao Peng. Lee Kuan Yew was honest enough to admit that he did what he believed to be the best-suited model for the special circumstances in the Singaporean society.

He determined right at the outset, the kind of society Singapore had to become, if indeed it was to survive and thrive. He was unapologetic about the enforced Social Engineering Programmes of planned housing with planned demographics; an education system that was tuned towards selection of the best and the brightest for the best and the brightest opportunities and one in which the rest were provided what the state believed to be adequate opportunities commensurate to their talents. At the same time, he made sure that there was a social security network, care for the elderly, affordable medical facilities, employment and the like.

While he embraced without hesitation competition, market forces, entrepreneurship, technology and Western investments, he balanced that with sustained efforts to make Singapore geo-strategically stable and secure. An astute, realpolitik practitioner, he made sure that the security of Singapore became a key strategic priority of Western powers and at the same time kept his links and options open with China.

The personality of Lee Kuan Yew became the personality of Singapore as he made decision after decision to ensure that Singaporeans became an overachieving, hard working and talented nation. Every adversity that he faced, he turned it into an opportunity, be it the polluted Singapore river or having no natural resource. He also made sure that he invested in areas that would make Singapore better prepared to exploit the ebb and flow of global economic growth. Be it making the investment of building Changi Airport when it was not even on the world aviation map or making the Refining Centre for Petroleum, he was always ahead of the curve.

Even the water dependency on Malaysia and his skirmishes with Mahathir Mohammed was turned by his successors into a challenge that they met with great success. It is not that Lee and his Singapore succeeded every time. Lee’s penchant of crushing dissent, emphasis on material progress over all else, became qualities that became associated to Singaporeans in general. His great emphasis on women’s empowerment and upliftment transformed them no doubt, but it also affected on the traditional family system to the extent that marriage and fertility became issues for the government.

Thus, the qualities of Lee became reflected as qualities of Singapore. Good and bad both were thus fully woven into the society. The other impact that it has had is on the Singaporean polity. Today, Lee’s successors are all highly capable and qualified technocrats, but the visionary leadership that Lee possessed is not exhibited to the extent Lee did. It is because that they have let him shape the way to approach things in the way he did.

Low tolerance for alternative viewpoints and the ruthless crushing of any dissent has left Singapore with a unipolar political organization. It has served Singapore well till now and will do so into the foreseeable future. However, it has stifled creativity and a more robust debate from different perspectives. The future successors may not have the same level of competence as the present ones and it is for Singaporeans and the next generation to come to terms with these inherent weaknesses to make an evolutionary transformation of Singapore.

To their credit, Lee has also made Singapore into a pragmatic society that is capable of acknowledging their mistake, correcting them and moving on. If they learn from the way Lee Kuan Yew faced the challenge of building a city-state nation from out of nothing, they will be able to reinvent themselves by building a more open polity.

It is this visionary thinking, investments into building competencies, courage to face up to challenges and mistakes that marked out Lee as a leader. The success made him a leader respected far beyond his shores and in later years made him believe that he was competent to advice everyone. While that may have been a bit of over-reach on his part, every nation, big or small, has benefited greatly from the advice that he so willingly gave.

Singapore will evolve and change, but what it will never be able to forget is their founding father and first PM, Lee Kuan Yew. A great statesman who, through his iron will, created a city state nation that is a mirror of himself. Singapore is Lee Kuan Yew’s legacy. For Singaporean’s, his thoughts, ideals and actions are something that has become part of them and thus a worthy heritage to live up to and to inspire all Asia and the world!