QUAD May Not Resolve All Of India’s Security Concerns, But It Is Headed In The Right Direction 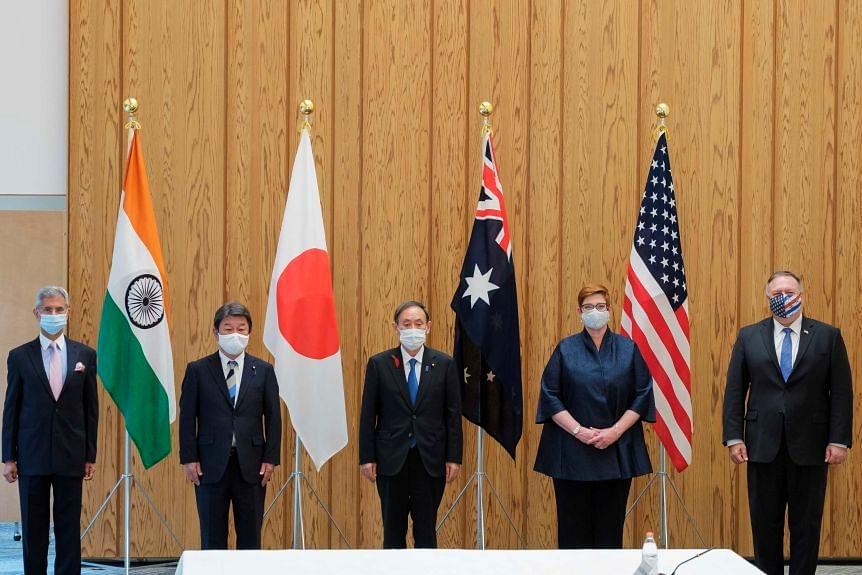 Quad Meeting in Japan this year.

On much-expected lines, the foreign ministers of the US, India, Japan and, Australia met in Tokyo recently.

In 2018, Wang Yi, the Chinese Foreign Minister, had described the QUAD as an ‘attention-seeking idea’ that ‘would dissipate like a sea foam’. His comments came from a position of discomfort and his contempt for the grouping was natural.

However, there’s a 180-degree change in the situation since he made his comments.

Back then, there was an element of reticence amongst the three QUAD members — India, Australia and Japan — because of their bilateral dynamics with China.

So, the fate of the grouping was open to debate.

The idea of this grouping was first proposed in 2007, but it did not take off owing to differences in national interest. During that time, China was rather seen as an economic opportunity.

Over a period, the myth of China’s peaceful rise was broken. China’s aggression in the South China Sea jolted Asia. Yet, Japan and Australia had to manage their relationship with China because of deep economic interests.

Likewise, with India, the urgency was not felt, because though the LAC was unresolved, it was peaceful.

India’s domestic imperatives, and a hot border with Pakistan were of higher priority.

The Trump administration had also reckoned to China, and been bluntly vocal about it. Still, until last year, except for the US, the other three members maintained a cautious approach towards China.

This is not to say that the concern was less serious, but the existing mechanisms were hoped to be sufficient to deal with China. India’s approach to China has been very pragmatic.

India and China have deep and fundamental differences. Yet, as per the Astana Declaration, India wanted to keep the channels of dialogue open, therefore, informal summits were organised so as to prevent differences from escalating.

India has domestic developmental priorities, and New Delhi would not want to be burdened with a full-scale war for the foreseeable future.

But China had remained unaccommodating to India’s concerns; rather, it has become hostile. Hence, India had already begun to explore its options, though it was intentionally kept low-profile.

Covid-19, its origins and China’s conduct of it has jolted the world. It has catalysed the QUAD. US and China were already engaged in a trade-war, and the Trump administration has spoken about China as a threat on several occasions.

The US, of course, has been the most vocal about the threat from China, in the run-up to the elections; its stance has hardened ever since.

The other three — India, Japan and Australia have faced a peculiar trouble from China. In Australia, Chinese penetration in the polity has been alarming.

Australia is reviewing its economic dependency on China. In the case of India, the territorial aggression on the LAC with China has been the breaking point.

China’s increased aggression with Japan in the Senkaku islands had compelled Japan to review its defence policy.

Economic dependency on China, and the possibility of it being used tactically to coerce has been realised during the Covid pandemic.

Thus, the statements from the Tokyo meeting indicate strategic thinking, and not targeted at the immediate concerns only.

Leaders spoke about resilience, about quality infrastructure and development, and maritime security. They also underscored the need for cyber security.

The ministers have duly taken note of the threat of hybrid warfare and spoken out against misinformation campaigns. So, the concern about China has been articulated comprehensively, and it goes beyond earlier statements that were general (‘free and open Indo-Pacific’, ‘security and stability’.)

There is also a clear direction of QUAD’s agenda. This meeting is indeed a milestone.

Since the last couple of years, QUAD has been shaping up, and its raison d’être is well-known.

For a common citizen, China’s perceptible threat is military, which is true but China’s challenge is far more complex and wider than its territorial ingress.

Any strategy to mitigate China’s rise needs to be long-term and comprehensive. China yields enormous geo-political clout because of its economic prowess.

The Belt and Road Initiative (BRI) is China’s flagship geo-political endeavour that is cleverly marketed as a geo-economic project. The BRI has gained traction because it is a simple demand-supply issue — the Indo-Pacific consists of developing countries that require infrastructure development, and China fills that gap.

Weak governance and lack of human capacity works in China’s favour because these countries simply do not have the expertise to assess the BRI projects.

Although, there’s increased awareness about the debt-trap in the past one year, yet, the need for infrastructure cannot be ignored. Strategic experts in Delhi have been thinking about this very seriously and this issue also has resonance with other QUAD members.

The problem, of course, has been funding. The QUAD countries are democracies, have domestic imperatives; and unlike China, have a system of accountability.

There is a fundamental difference between a free-market economy and a state-led economy. For instance, the Indian government may desire to duplicate China’s BRI in some way; but an Indian private player is not going to go build roads into a location where there’s no return.

So, strategic goals are not always congruent with business decisions.

The Chinese political system and its companies work in sync, and then it also has excess capacity in infrastructure.

It is a real challenge to deal with this juggernaut. China has now proposed the BRI concept to digital connectivity. It already has projects in Southeast Asia, and by 2050, it aims to establish a global network of submarine sensors and cables.

Critical technologies, where China is progressing, is another area with huge security implications.

Therefore, the current nature of Chinese power is deeper and wider and only military might would not be not sufficient. It needs to be countered at two levels — ideological and policy-level.

The QUAD understands this very well.

A strong narrative was essential to deal with China’s ideological challenge; hence the emphasis on liberal-international ideas such as rule of law, rules-based international order and free and open Indo-Pacific.

In the early phases of the pandemic, a narrative was built around how authoritarian regimes are more capable in handling a crisis than democracies, which had gained traction in the liberal democracies.

But in the current context, a counter-narrative is of little value unless backed by tangible actions. Therefore, a strong narrative or a construct along with a plan of action is inevitable when it comes to dealing with China.

The QUAD countries cannot merely announce infrastructure programmes; it ought to fundamentally differ from the BRI. The US had announced the Blue Dot Network for Quality Infrastructure in 2019.

Recently India, Japan and Australia had also proposed Supply Chain Resilience Initiative. The QUAD advocates transparency, inclusivity and sustainability, which would be financially sound unlike the debt-trap seen under BRI.

QUAD will face a great deal of funding challenges here, particularly when economies have gone south; but it is not insurmountable.

Significance of the meeting

This time, the QUAD ministers from India and Australia added ‘resilient’ to the description of the Indo-Pacific vision — very important, since the meeting was held during the pandemic.

Ministers also spoke about the need to counter disinformation and on cyber security. Hybrid warfare is a reality — US, India and Australia have experienced it.

National security is no more limited to territorial integrity and, therefore, has become extremely complicated for agencies to deal with. A quadrilateral intelligence sharing mechanism is essential.

Since the previous ministerial meeting in September 2019, there have been indications of QUAD expansion or a Quad-Plus grouping. The Japanese Foreign Minister indicated about QUAD expansion this time and the idea has witnessed unanimous agreement.

The most likely candidates are Vietnam, South Korea, New Zealand and France. Other possibilities include UK, Canada and Germany.

QUAD has also rightly agreed on ASEAN centrality to prevent fragmentation. ASEAN has always been wary of great power rivalry and does not want to make the either-or choice between US or China.

India had always emphasised on ASEAN centrality, which the other three QUAD members have now endorsed. This would reassure Southeast Asian states, that hopefully, the region would see QUAD favourably.

QUAD has expanded its agenda, which is wise and pragmatic. Earlier, it was primarily seen as more of a military- security grouping, because that is the core strength of this group.

Save for the US, the other three weren’t very comfortable with this single identity. At a practical level also, it was a serious limitation in gaining wider support. This was because (until pre-Covid) times, not many saw China as a security threat or a country of concern.

From their point of view, a military partnership would have been destabilising and completely unnecessary at that point in time. Barring a few, who have actual territorial conflict with China, or those who have the foresight, the rest of the world did not see China as a threat.

Post-Covid, however, this perception has changed and, therefore, the atmosphere is conducive for a QUAD partnership. In a post-Covid world, where national problems are extremely complex, the QUAD could not have based itself only on, say; freedom of navigation and rule of law.

Tangibles are needed in comprehensive development and of cyber-security.

A mistake one does when it comes to groupings such as these is to view them in an absolutist way — that the QUAD will resolve every security concern. Some wonder as to why the grouping did not issue a joint statement.

This analysis comes from a fundamentally skewed understanding of the QUAD and of the wider Indo-Pacific region. It neglects the context. The QUAD at the moment is a grouping of countries that have common concerns.

The elevation of QUAD to the ministerial level, and its institutionalisation is an achievement in itself, particularly the timing of it.

The ‘QUAD birthday cake’ sent the message and is sufficient at this point in time. Members have to cover some ground before they can issue a joint statement.

In fact, for this meeting, a joint statement was not expected at all. The pace and direction of the QUAD is favourable for India’s national interest.

Amruta Karambelkar is research associate with the Indo-Pacific cluster at the Vivekananda International Foundation in New Delhi.
Get Swarajya in your inbox everyday. Subscribe here.
Tags: