The Summit That Wasn’t: What Does The North Korean Regime Really Want? 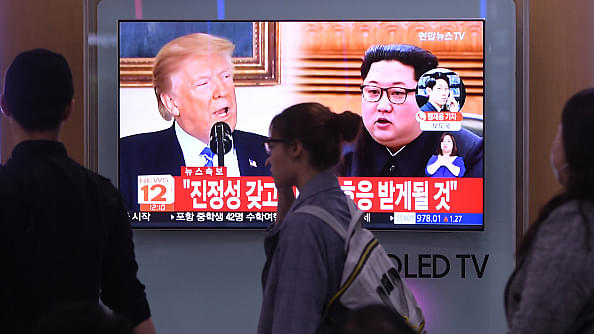 Playing unpredictable and pricey, Kim has suddenly alienated himself from the peace path he was dancing on merely a few days ago. Promising to end the conflict in the Korean peninsula and to move towards denuclearisation of the region, Kim gave Trump the hope of ending the prospect of a nuclear war. However, merely days before the Singapore summit, both Kim and Trump have traced back their steps, the latter calling off the summit formally.

Even though the North Koreans have completely dismantled Punggye-ri, what they claim as their only nuclear site, experts remain skeptical as they claim that the site was rendered useless after the last nuclear test.

The shenanigans of North Korea do not come as a surprise. Given the regime has traded hope for peace against economic and political concessions in the past, Kim wanted to milk the prospect of the summit for all its worth. Calling for South Korea to cease their military drills with the US was one such attempt. However, it would have been foolish for US, South Korea, or even Japan to give way for any concessions, economic, political, or military, before the dictatorial regime agrees for denuclearisation in any verifiable capacity.

To get North Korea to trade in the future, Trump does not need a grand strategy. If the current residents of the White House intend to use history as an indicator, they must understand that long-term strategies will not necessarily work against the Kim regime. Obama, Bush, and Clinton before them, tried in their respective capacities, all in futility. The idea must be to understand what North Korea wants, improvise, and continue building upon it. So, what is that North Korea actually wants?

First and foremost, Kim Jong-un wants his regime to survive. Even with poor social standards, Kim has warded off the internal threats to his regime. This began with brutal executions of over 300 people in the government until 2016, including one of his uncles in an attempt to consolidate power. Alongside, an economic model has been modeled on China. Over 75 per cent of the households in the regime now earn their livelihood from free markets. In 2016, the economy grew at 3.9 per cent, registering the highest growth rate since 1999. Trade with Russia grew by 73 per cent, and with India, trade in excess of $100 million was conducted in 2016-17 alone before economic sanctions came into play.

Since ascending to power in 2011, Kim took forward the nuclear programme. Attaining capacity to hit the entire US mainland, Kim has established his regime as a global force to reckon with. Defending their actions before the United Nations, regime representatives have pointed out how the necessity of nuclear weapons in the face of an imminent threat from South Korea and the United States. While the exact number of nuclear weapons in North Korea remains conflicted, it has enough to start a global war, if not end one.

Read: Trump-Kim Summit: Who Is Pulling The Strings In This Curious Korean Drama?

The North Korean regime sees these nuclear weapons as a deterrent to their extinction, taking a cue from the fates of Saddam Hussein in Iraq and Gaddafi in Libya. However, these weapons are mere tools for survival, and therefore, it is in the longer interests of the United States to engage China, Japan, Russia, and South Korea to assure the regime the social and political security it strives for. No one in their right minds, not even Kim, would agree to denuclearisation while facing a threat to their mere survival, and without engagement, no progress could have been made in June, or will be made in the future.

Secondly, North Korea wants itself untangled from the economic sanctions pressed by the UN, United States, European Union, Japan, and even South Korea. While China, which accounts for 90 per cent of the global trade with North Korea, is also a facilitator of black markets for trade with the regime, North Korea reportedly could suffer from $800 million worth of losses due to UN sanctions on textiles in 2018 alone. With the summit now called off in its entirety, the regime may brace itself for more sanctions.

Thirdly, the regime craves for economic assistance. Even though South Korea alone helped North Korea with over $7 billion from 1991 to 2015 along with food and medical assistance, the regime has received help from Russia, China, and even India to aid its population. While the regime has come a long way from the famine of the 1990s that killed over a million people, it’s per capita income is only 5 per cent of that of South Korea. Thus, it does not come as a surprise that Kim has used the denuclearisation option as a trade-off for more economic assistance, and may well again attempt to do the same for a summit to happen in the future.

Four, North Korea wishes for denuclearisation, if they ever get to that, to be in a phased manner. With Xi Jinping on their side, the regime would look to conduct verifiable denuclearisation in a phased manner that may stretch beyond Trump’s second term, assuming he gets one, and assuming he gets Kim to agree for a summit in the future. While this won’t play out well for Trump’s theatrics, it does give China the backyard peace it craves for. With the dismantling of Punggye-ri, Kim has demonstrated some intent. However, complete, irreversible, and verifiable denuclearisation is not an option for Kim, not even remotely.

Five, Kim would like his regime to be acknowledged as a legitimate nuclear state. Faced with threats from the US troops stationed in South Korea, and the alliance of US, South Korea, and Japan in the peninsula, Kim attributes legitimacy to his nuclear programme and would want the US to do so too before any talks can go underway. This could add to his stature back home, and give him the stature his father and grandfather could not achieve in over 60-years of their reign.

Kim, only in his 30s, would look to retain power beyond Trump’s stay in the Oval Office, and possibly this world. Thus, Trump must realise that he is dealing with two leaders with infinite terms. For Xi, denuclearisation in a phased manner would not only be an immediate solution for peace but also allow for unhindered trade with North Korea. For Kim, a phased out plan for giving up nuclear weapons offers a way to wait for someone else in the Oval Office in order to strike a better bargain.

Kim, as of now, measures the duration of reign in decades, Xi in years, and therefore, for Trump, whose term may well not exceed more than a few dozen months, the fallout of the Singapore summit indicates a diplomatic failure, one the occupants of the Oval Office are not alien to.

Apparently, Trump will have to wait longer for that Nobel Peace Prize.

This is the third in a multi-part series of articles on the now cancelled Trump-Kim summit in Singapore next month.