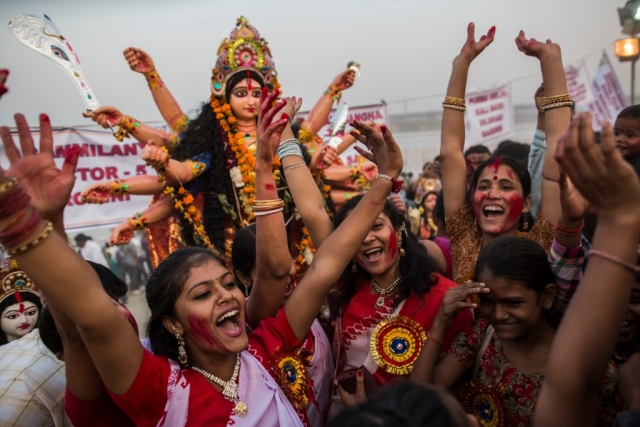 Hindu devotees chant prior to immersing an idol of Goddess Durga into the Yamuna river on the last day of the Durga Puja. (Daniel Berehulak/Getty Images)

The ongoing coronavirus-induced pandemic will have a positive fallout in Bengal: the October-end Durga Puja this year will be devoid of its crass commercialism.

All the Durga Pujas have been forced to slash their budgets drastically due to the economic downturn.

While all corporate houses who used to donate huge sums of money to the big Puja committees have been badly hit by losses, even individual donors with their slashed incomes are not being even a tenth as generous as earlier.

This has meant that the Durga Puja committees are forgoing the unnecessary pomp and ostentation that have marked this biggest religious festival of Bengal till now.

In addition to the lack of generous corporate and individual sponsors with deep pockets, Chief Minister Mamata Banerjee’s advisory to Puja committees has also put paid to any grand plans of the organisers of community Pujas.

Last week, Banerjee held consultations on Durga Pujas this year with her much-touted global advisory board on Covid.

The Board, led by Nobel laureate Abhijit Banerjee, suggested that the Puja pandals (marquees) be kept open on three sides.

This will allow free circulation of air to limit the transmission of the coronavirus inside the pandals.

Chances of the virus being transmitted easily inside closed spaces is extremely high.

Chief Minister Banerjee said this suggestion has been accepted and will be conveyed to the Puja organisers. Many Puja committees have also welcomed this suggestion and are designing their pandals accordingly.

This, in effect, precludes the flamboyant pandals on which lakhs of rupees are spent. Most of the budget of Durga Puja organising committees — an average of nearly 90 per cent — goes towards making grand and innovative pandals and complementary murtis of the Goddess and the other deities.

The major Puja committees even engage big designers and artists to conceptualise and design their pandals and murtis based on a specific theme.

Big bucks are involved in this, because there are attractive prizes instituted by major consumer goods companies to be bagged.

And the Pujas that have a record of bagging prizes are showered with advertisements by big companies.

The trend of awarding Pujas by corporate houses started many decades ago. The awards are given out for innovation, eco-friendliness, the theme, social messages being conveyed and many other parameters.

The prize money has only gone up over the last three decades and so have the stakes.

An award brings a windfall in the form of recognition, fame and then advertisements and sponsors.

Since these awards result directly in an exponential increase in footfalls, good press and a lot of publicity for a Puja that bags a coveted award, consumer goods companies compete with each other to sponsor that Puja, put up hoardings and billboards around the Puja pandal and get themselves associated with that Puja.

“Durga Pujas in Bengal, especially Kolkata, have little religiosity left in them and are more of a jamboree involving huge sums of money. It is all about sponsorships, advertisements, ostentation and glitz to bag awards and increase footfalls. The awards trigger more commercialisation. It is a vicious cycle,” said chronicler Debashish Bhaduri, who has researched and authored books on Durga Pujas in Bengal.

Fortunately, this year, Durga Pujas will be a largely sedate affair without the pomp and glitz and much lesser commercialisation.

Organisers of the major Pujas in Kolkata have attested to this.

These organisers say they will keep the pandals open on three sides and place the deities on a raised platform for Devi and Her children to be visible from a distance.

That will prevent overcrowding inside the pandals.

Some of the major ones will not even have the traditional marquee and will, instead, have a simple shade over the platform on which the murtis of the deities are placed.

The decorations and illumination will also be at their bare minimum this year and the stress, say the organisers, will be more on the rituals and the religious aspect of Durga Puja.

“The stress on the religious aspect could also be due to the fear of the virus. In such an unusual situation, when mankind is faced with grave danger, it's basic human nature to turn to the Almighty,” said Arnab Maity, a psychiatrist and social behaviour analyst.

The pandemic, thus, is having a positive fallout as far as Durga Pujas are concerned.

“This forsaking of ostentation and pomp and a fresh focus on rituals and the religious part of Durga Pujas is a welcome change. Durga Puja is a religious festival and should remain so, instead of becoming a grand jamboree shorn of the religious underpinnings,” he said.

Durga Pujas this year will be a throwback to the good old days when the stress was more on worshipping Devi rather than making grand pandals.

Durga Puja In Bengal: What’s Missing Is The ‘Puja’

The Biggest Festival Of Bengali Hindus Should Be Called Durga Puja, Not Sharod Utsav