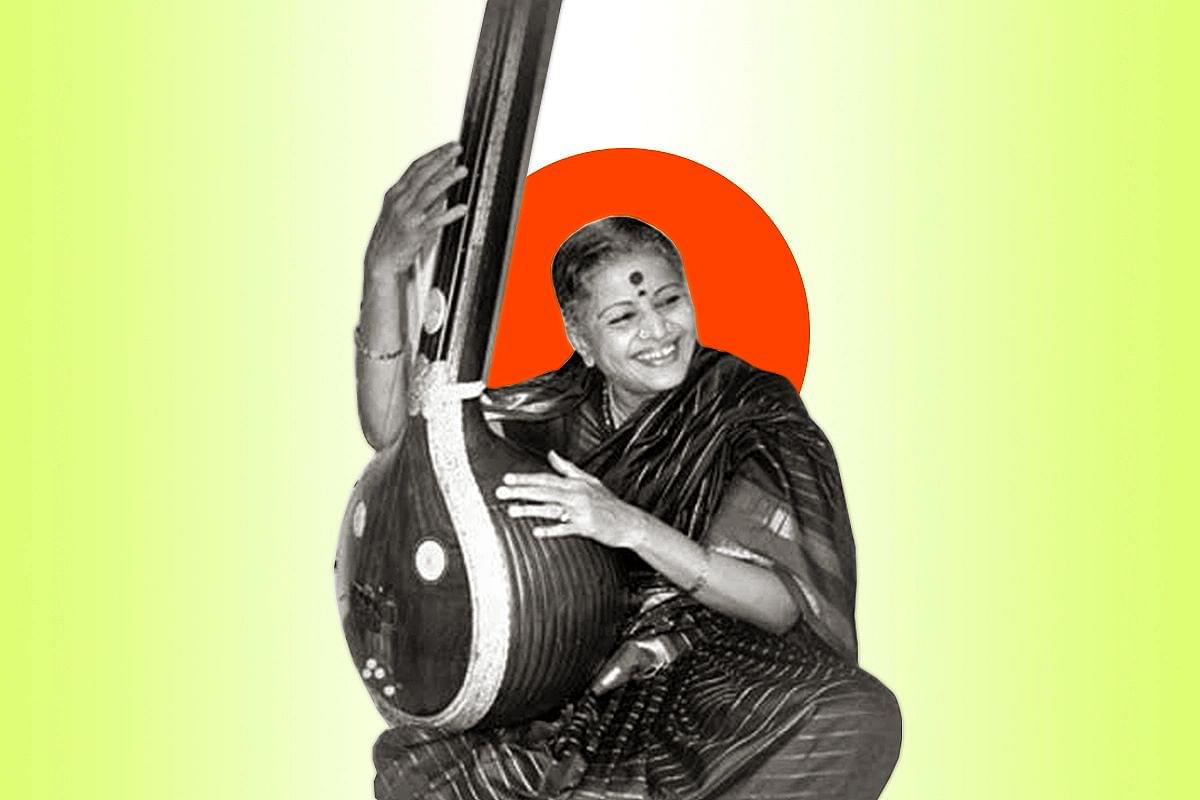 16 September, marks the 105th birth anniversary of the doyen of Carnatic music, M S Subbulakshmi. Much has been spoken and written about her life. Of the many chroniclers, perhaps the most notable one would be the literary legend R K Narayan.

His short story ‘Selvi’ is inspired by aspects of Subbulakshmi’s life that lay behind the glist and glamour of her stardom. She was a star, no doubt, and the fame her musical prowess brought was accompanied by praise for her fashion.

The traditional Kanjeevaram sarees she donned were a rage among the audience and music lovers alike. A colour shade of middle sea blue became synonymous with the singer after she started wearing it at her concerts. It now bears the title ‘M.S Blue’.

Everyone would try to imitate the M S look- centre-parted hair combed into a bun that was adorned with a string of Jasmine flowers, vermillion, and ash marks on the forehead, plus the signature Blue Jager diamond nose studs.

And no one better understood the importance of appearance than her husband, T Sadasivam. Caricatured as Mohan in the story, Sadasivam is said to have curated almost all aspects of Subbulakshmi’s life. He crafted her path to fame, decided where and when she would sing, what she was to wear, and how she was to look. R K Narayan illustrates the extent to which Mohan monitored Selvi’s appearance in the following extract:

“needed touching up. For her complexion, by no means fair, he discovered the correct skin cream and talcum which imparted to her brow and cheeks a shade confounding classification. Mohan did not want anyone to suspect that he encouraged the use of cosmetics. He had been a follower of Mahatma Gandhi and spent several years in prison, wore only cloth spun by hand, and shunned all luxury.”

While some often censure Sadashivam’s chauvinistic control, others credit it for her achieving the status of national icon status. T Sadashivam was her manager; he would plan, book and choreograph her concerts. Much like Mohan, he brokered deals that would lead to the real-life Selvi singing for the rich and renowned. From the Prime Minister’s residence to the United Nations, Subbulakshmi’s melodious voice enthralled audiences all around the world.

In sharp contrast to Mohan, Narayan is kind in his description of Selvi. In fact, the tone is almost reverential:

“Uncomplaining, seemingly wrapped up in some secret melody or thoughts of her own… When Selvi came on stage, she looked radiant, rather than dark or fair”

“They named her the Goddess of Melody… When she appeared on the dais the audience was thrilled as if vouchsafed a vision… Her appeal was alike to the common unsophisticated listener as to pundits, theorists and musicologists, and those who didn’t care for any sort of music liked to be seen in her concerts for prestige’s sake.”

Much like Narayan’s Selvi (for the majority of the story), Subbulakshmi too would always oblige her husband’s demands. Born into a family of courtesans to M S, Sadashivam offered a life of greater purpose and recognition. She could never dream of defying her husband. This is where Narayan’s story differs.

Towards the end of his tale, Selvi abandons Mohan and moves back to her mother’s old, dilapidated house. She refuses to return to Mohan’s plush Lawley Terrace residence, and to her money-minded husband’s greatest horror, she then begins to sing for free, charging nothing of the audience who gather around her house to hear the melody of her voice.

M S Subbulakshmi’s grand-niece Gowri Ramnarayan writes for the DNA, that when she once asked R K Narayan as to why he made Selvi abandon Mohan, despite knowing that Subbulakshmi, a traditional and devoted wife, could have never dreamt of doing so, apparently Narayan replied with a charming wicked smile “I thought, let her be free and happy in my story, if not in her life.”