Bank Losses Cross Rs 20,500 Crore; FM Should Be Looking Out For Scams 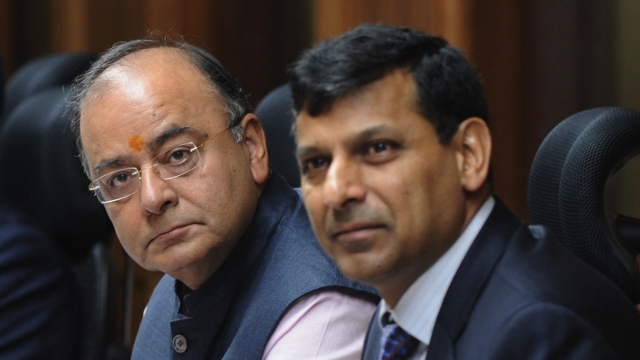 Indian finance minister Arun Jaitely (2L) along with Reserve Bank of India (RBI) governor Raghuram Rajan (3L) look on ahead of a meeting with the Central Board of Directors of the Reserve Bank of India in New Delhi on August 10, 2014. India's central bank governor Raghuram Rajan has defended his recent decision to keep the interest rates unchanged, reassuring that the current policy will bring down the spiralling inflation. Rajan addressed a meeting of the central board of the Reserve Bank of India (RBI) in New Delhi, which met with the finance minister Arun Jaitley for the first time after he presented the maiden budget of his right-wing government in July. AFP PHOTO/ SAJJAD HUSSAIN (Photo credit should read SAJJAD HUSSAIN/AFP/Getty Images)

Nationalised banks are hurting. And badly. Just when we thought we had seen the worst in public sector banking (Punjab National Bank’s Rs 5,370 crore loss), along comes Bank of India with a humongous Rs 6,089 crore minus sign before it. Barely half the public sector banks have declared results and they have spilled oceans of red ink in the last quarter (January-March 2016 losses so far: Rs 20,500 crore). By the time the rest of the results are out, losses will surely cross Rs 25,000-30,000 crore, enough to soak up the entire Rs 25,000 crore of fresh capital promised by the finance ministry this year.

This is the time for watchfulness, not excess despondency. For some of this is really good news. If banks are finally letting it all hang out, it is a blow for greater transparency. Their account books are now more believable. It also means that going forward they will look at loan quality more than loan quantity. And when the economy starts turning around, their profits will rebound faster, especially if we continue to see interest rates weakening this fiscal.

The other side of the coin, though, is grim. Since Finance Minister Arun Jaitley is not promising more capital than what he has already promised (see his interview to The Economic Times), it means banks have to generate more resources internally or raise capital from the market on lousy terms. This means lending will not rebound quickly, and economic recovery will be slow. Banks may also be less keen to cut interest rates on loans in order to protect existing margins.

While these consequences are obvious, less obvious is the possibility of financial scams in such an environment.

Bank scams are more likely in three situations: when political meddling in bank lending is high (which is most of the UPA period); when there is excess optimism about growth and profitability (post-liberalisation, and post-2004); or when banks are hurting badly - as is the case now.

While we can rule out the first two situations, unless the government is more watchful, bankers may be tempted to show quick profits by resort to risky manoeuvres. More so when capital is not easy to come by.

Remember the Harshad Mehta scam of 1992?

In the years following economic liberalisation in 1991, Manmohan Singh decided to gradually end financial repression by allowing the markets to decide the cost of money. The finance ministry, which earlier kept rates artificially low and then forced banks to buy its paper at those low rates, started paying market-based rates. In the era of regulated rates, the Reserve Bank also allowed banks to hide their losses by giving them lots of leeway on prudential norms and provisioning for losses. It was assumed that government-owned banks were unsinkable, and so profits did not matter.

The immediate consequences of the beginning of the end of financial repression were two-fold: the value of banks’ holdings of government paper crashed, leading to losses. And banks had to start providing for bad loans transparently.

In this situation, the late Harshad Mehta stepped in as saviour, and offered to generate higher returns on banks’ holdings of treasuries. Some gullible banks were lured, and soon Mehta was helping himself to their treasury stocks and using that as collateral to raise money for investing in the stock markets. The scam ended when his operations were outed by bears who wondered where he got so much money to invest in stocks endlessly. It was a Ponzi scheme where Mehta used stolen bonds to raise money, which then got invested in stocks, and the returns from stocks were used to pay higher returns to banks, completing the cycle. This scam could go on only as long as banks did not note the (temporarily) missing bonds in their portfolio and as long as market returns were high enough to grease the entire scam. Mehta crashlanded in jail soon after.

Conditions today are not like 1992-93, when transparency was an unknown word in the world of Indian banking. Today, most public sector banks are listed and scrutinised by investors. Also, the high losses being reported today are driven by the need for greater transparency and the political push under Narendra Modi to end cronyism. And unlike 1992, when interest rates were rising and caused banks portfolio losses, today the interest rate regime is trending down, and this tends to enhance profits rather than reduce them.

But if any bank is hurting more than what is visible, managements may be tempted to try short-cut methods of making money. Harshad Mehtas appear from nowhere to promise banks easy money.

2016 is not 1992, but this is precisely the kind of financial crisis when bankers are sorely tempted to look beyond the rulebook. It would be foolish if the government assumes the opposite.