The Road To Uttam Pradesh: These Five Major Changes Happening In UP Can Help It Shed The BIMARU Tag 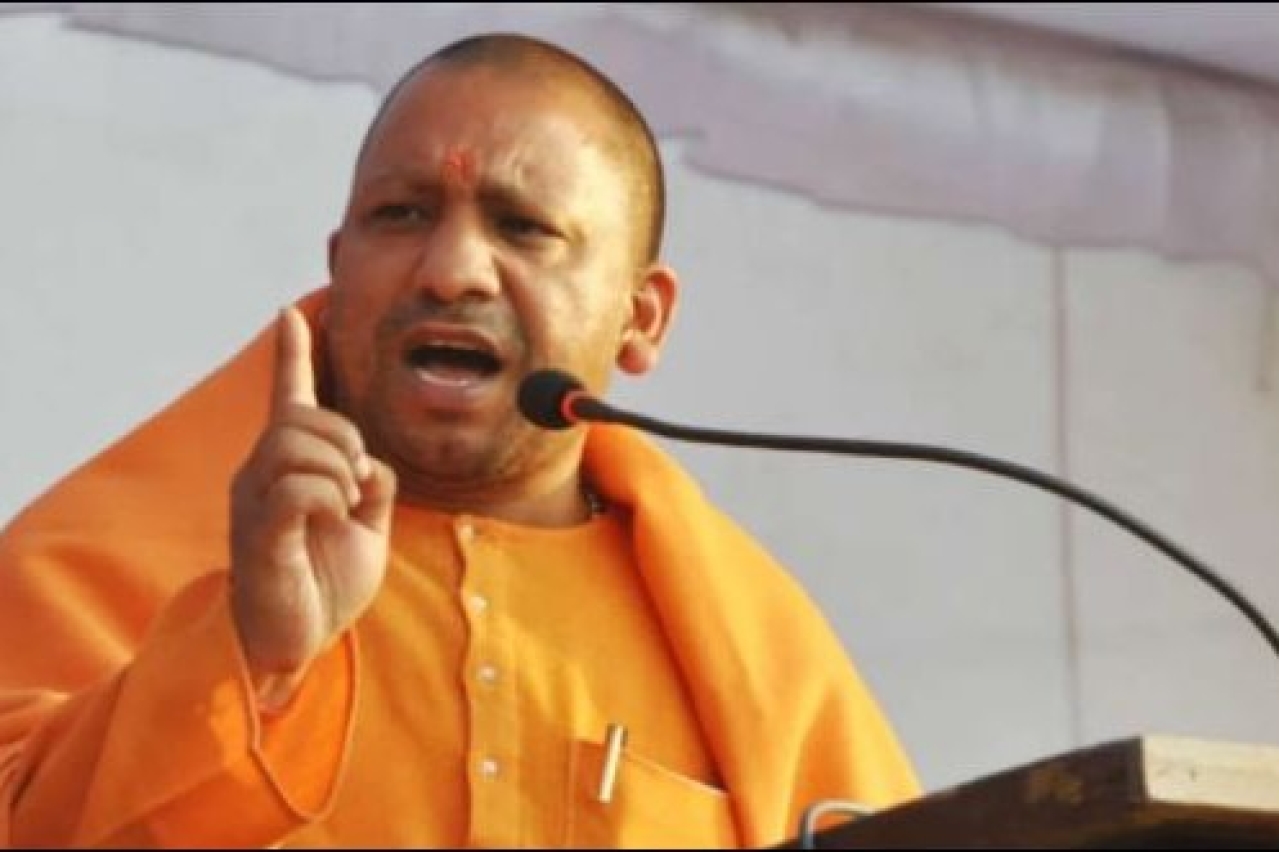 In the 1980s, Bihar, Madhya Pradesh, Rajasthan and Uttar Pradesh got clubbed together under the acronym BIMARU referring to their sick status as reflected in various key economic and social indicators. Today, the concept is outdated with Rajasthan, Madhya Pradesh, and even Bihar registering impressive economic growth. Instead of BIMARU, constituents of which were distributed between east, west and central India, now the states comprising the eastern wing are considered a drag on the country’s development. India’s success will depend on how these states chart their course.

By virtue of being India’s most populous state, Uttar Pradesh assumes immense importance in the scheme of things. UP would be the fifth largest country in terms of population if it were a separate country, however, in terms of gross domestic product (GDP), it’s comparable to Bangladesh. But things have started taking a turn for the better.

Spark Capital, an investment banking, investment advisory and institutional equities and infrastructure advisory services firm has come with a strategy document that notes five epochal changes currently taking place in Uttar Pradesh, which can put the state on a high growth trajectory.

First, massive crackdown on criminals since the Yogi Adityanath government assumed charge in March last year, which has resulted in the elimination of around 50 most wanted criminals, arrests of 4,881 criminals, with over 5,000 criminals having asked for their bails to be cancelled out of fear. Cops who spoke to Spark Capital team told that they have received strict instructions “from the top to control not only crime but to stop any form of extortion, eve teasing etc”. The strategy document notes that by straightening out the law and order problem, the state stands to reap peace dividend which has positive economic side effects of its own. Due to better policing and establishment of peace, women can be in workforce, small vendors can operate without fear of extortion and economic activities also get a leg up.

Second, road infrastructure in Uttar Pradesh has really started to improve. Spark’s strategy notes that total spending by the state government on roads and bridges stood at Rs 708 billion in the last four years (FY14-FY17) which was 1.4 times the combined spend in the previous 10 years. Be it rural or urban areas, roads are being laid at face pace.

The data on sales of Medium and Heavy Commercial Vehicles (MHCV) points to a very healthy development. In 2017-18 Fiscal Year (April to December) UP registered an impressive growth of 85 per cent in sales in this segment, highest in the country.

“Strict laws against overloading and high infrastructure demand led to the pick up in demand for commercial vehicles. The state government relaxed the overloading limit in UP leading to demand tapering off for higher tonnage CVs and down trading to lower tonnage,” notes the paper.

Energy deficit (energy required - availability) has drastically reduced from 22 per cent in 2009-10 to 2 per cent in 2016-17. With the government aiming to provide 24x7 power to all by March next year, and with crackdown on power thefts, the electricity sector is certain to reap dividends for the state’s economy in coming years.

Fourth, Uttar Pradesh has much to gain from reaping its demographic dividend. The state has the youngest population among major states with median age of 20 years. Age group 10-19 share is highest in the country at 24.5 per cent.

Fifth, the per capita income in the state has crossed an important barrier, that is of $1,000. Fast growing states like Gujarat, Maharashtra, Tamil Nadu and Karnataka crossed this threshold about a decade ago. “In terms of per capita GDP, UP is following India with a lag of one decade”, notes the paper. From here, as the state’s per capital income rises further, it will see big demand for durable goods, clothing and footwear, entertainment, medical and household products. Spark strategy paper estimates that the state’s per capita income will increase to $1,900 by 2025.

Here’s how the outlook on key economic indicators has changed in the last few years. 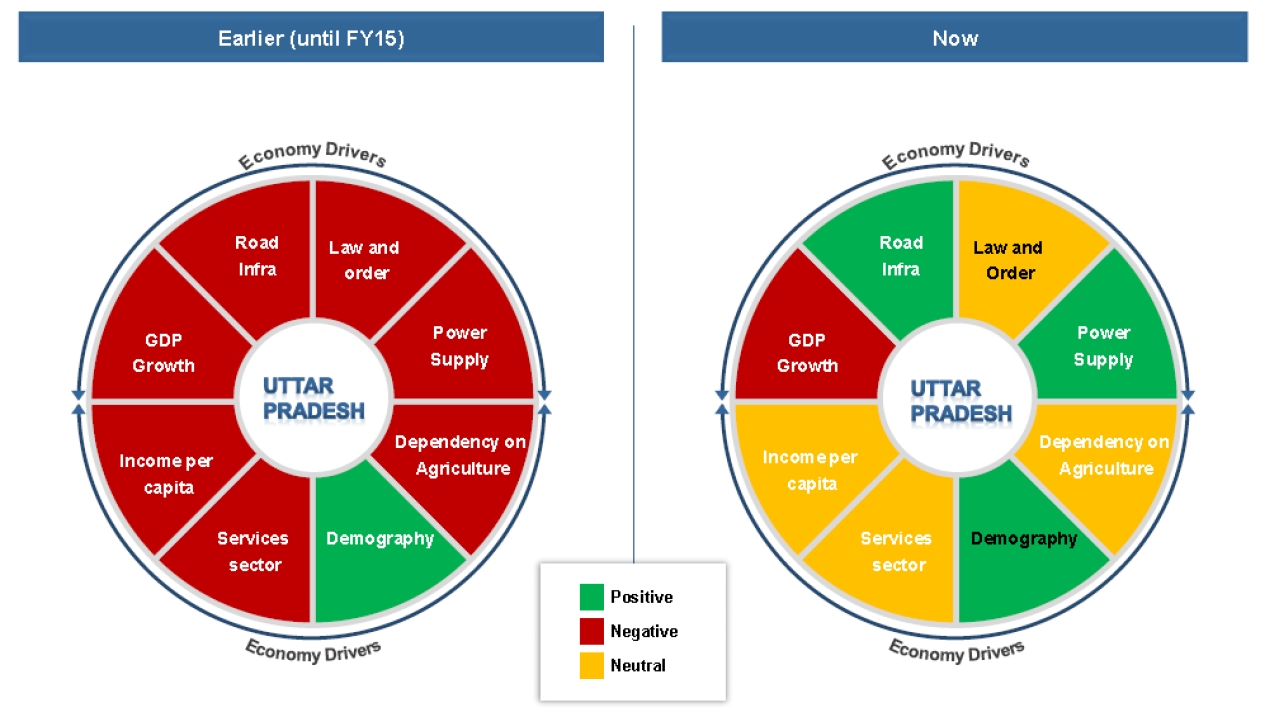 Spark Capital team travelled over 1,000 kilometres across the length and breadth of Uttar Pradesh over a period of seven days meeting various businesses each day to gauge the pulse on what’s changing in the state. It found improvement in cash flow situation in rural UP due to pick up in non-farm activities and higher realisation for potato and sugarcane farmers. This has resulted in an increase in tractor demand; sharp pick-up in demand for tractors and two-wheelers, massive demand for heavy commercial vehicles, pickup in consumer durables, cement demand and so on.

The strategy document by Spark Capital paints an optimistic picture of the state and signals that the state is all but ready to shed the BIMARU tag.

All charts and tables are from Spark Capital research.

Get Swarajya in your inbox everyday. Subscribe here.
Tags:
467 Shares