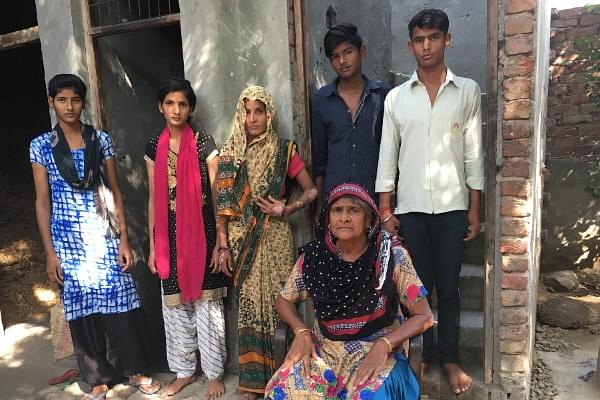 In May, Swarajya reported about the tragic death of a train passenger, Devendra Balhara, in Haryana's Palwal district. Balhara, 38, was thrown off the Agra-Delhi intercity express by some fellow commuters on 12 August 2017. The fight, as is often the case on busy train routes in this part of the country, was over seat-sharing.

Balhara was survived by his wife Sonia and four school-going children. His father had died several years ago while his mother Lajjawati lives with the family.

Swarajya had pointed out how the state apathy in his case was in stark contrast to another unfortunate train accident victim like him, who had died in similar circumstances, on the same route and in the same month. That victim was 16-year-old Junaid Khan. Khan's tragic death created an uproar while Balhara's did not even get a passing mention in mainstream media.

While Junaid's kith and kin got compensation of more than Rs 28 lakh, Balhara's was left in the lurch.

Until May when Swarajya wrote about the plight of his family, not only had they not received a penny in compensation from the government, no official even cared to pay a visit. The only earning member of the house gone, the family was finding it difficult to make ends meet. The gravity of their sorry state could be gauged from the fact that Balhara’s eldest daughter, 16, was even forced to drop out of the government school for lack of money.

Balhara's mother Lajjawati told Swarajya that after our report was published, the family was approached by Hindu organisation Agniveer which helped take their case to the National Commission for Scheduled Castes.

Thanks to their intervention, now all the four children are studying in a budget private school free of cost, including the daughter who was forced to drop out from the government school.

After conducting several hearings, the SC Commission directed Palwal Sub-Divisional Magistrate to grant the family Rs 8.25 lakh under the Scheduled Tribes (Prevention of Atrocities) Amendment Rules, 2016. It also ordered that Balhara’s wife be given Rs 5,000 in monthly widow pension and his children be given free schooling.

Lajjawati told Swarajya that she received part of the compensation this week and the money would help the family immensely in this hour of need. "We were pushed to the limits. The house was running on my late husband's modest pension (he was in the Army) that was just not enough," she said.

Activist Satish Vaid who helped with the Balharas' case, told Swarajya that the case exposes the fault-lines and inefficiency of the government. "As the family had filed an FIR (first information report) in the case and even submitted documents of their caste, it was the duty of the administration to ensure that they get the due compensation. The matter should not have needed our intervention in the first place," he said.

Vaid's sentiment is also echoed by the Commission in its order (dated October 9 2018, a copy of which is with Swarajya) which notes that the failure of the railway police to add provisions of the Scheduled Castes and Tribes (Prevention of Atrocities) Act in the FIR "exposes their carelessness and indifference" and kept the family deprived of state help for more than a year.

The Commission has also rebuked the railway ministry over what it says is their seemingly discriminatory behaviour against Balhara’s family. It has noted that while the railways took note of Junaid Khan's case and awarded his family Rs 8 lakh in compensation, it has not done so in case of Devendra Balhara. Swarajya had earlier reported that in Junaid’s case, the railways took suo moto cognisance and sent officials to his doorstep to offer compensation.

The Commission has directed the Government Railway Police (Ambala Cantt) to duly compensate the Balhara family with the same amount.

The arch of the treatment meted out to Balhara’s family which has finally bent towards justice exposes the way India’s state machinery works. In its natural state, the government is grossly insensitive. It has to be jolted out of its natural tendency to no do its work every time by pulling the levers in the media, activism or political circles. Those with little or no influence are lesser citizens. If the Indian republic can alleviate this unbearable lightness of prevalent feeling of treatment as second-class citizens, that too in a democracy, it will have set a sound foundation for a stronger nation.