The NCERT Conundrum: Why Policymakers Must Do Their Homework First 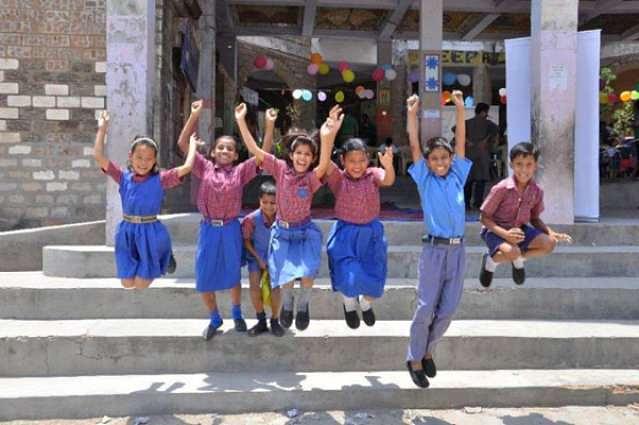 The Minister of Human Resource Development (HRD), Prakash Javadekar said a few days ago that the process of halving the National Council of Educational Research and Training (NCERT) syllabus by the academic year 2019 would begin. Media reports said students, parents and faculty welcomed this move.

However, the move had its share of brickbats as well with Swarajya publishing an article criticising the decision.

The issues that are brought forth in the debate are many: How much should we teach our children in the school? Should they be stuffed with knowledge when their brains are malleable? Or, should they be left alone, as the children are innately curious and will pick up things as they grow up? How will it affect them in the ultra-competitive, interconnected world that they will face while growing up? Should we worry about national competitiveness where knowledge and innovation are the biggest tanks in the army? Let us examine.

“Give me a dozen healthy infants, well-formed, and my own specified world to bring them up in and I'll guarantee to take any one at random and train him to become any type of specialist I might select - doctor, lawyer, artist, merchant-chief and, yes, even beggar-man and thief, regardless of his talents, penchants, tendencies, abilities, vocations, and race of his ancestors,” wrote the influential behavioural psychologist John B Watson after his famous (now infamous) Baby Albert experiments. Based on his radical ideas child care “bibles” were produced that drove schooling in America in the 1920s and 30s. Jean Piaget’s student-centric schooling and Lev Vygotsky’s curriculum-centric schooling with teachers as prime movers had their times in the second half of 20th century.

A few years ago, ‘Tiger Mom’ Amy Chua went on to point out in her book, Battle Hymn of the Tiger Mother, on how Asian children are successful in the US through relentless pressure on excellence. It was met with a backlash from newspapers like the New York Times and the Guardian.

In our own country, parenting books were produced aplenty only in the last decade or so. If you were in school in the 80s or 90s, you would be in a minority if your parents and teachers were not pushy. The socialist regime created scarcity of opportunities in college admissions and jobs, forcing the vast middle class and poor to depend on success in competitive exams. In the first decade of new millennium, the goal posts shifted - it became a search for better opportunities than survival. However, the similar pedagogical methods continued to work in schools. Indians, who were products of the same system, went abroad to do amazing things.

On the other side, there were schools which believed that the common schooling methods leave no scope for creativity and offer no space for children to discover their innate gifts. Their primary contention is that the system over emphasises mathematics and rote learning and hence is detrimental to children in the long run who might possess other skills that need nurturing. Sudbury school in the US, Dolto’s school in France, schools run by Auroville or Krishnamurthy Foundation or Tagore’s Shantiniketan are examples of these. (Flippantly, in our own many government-run schools children are left to fend for themselves, as teachers often do not show up!). So there have been multiple schools of thought on how children should be educated across cultures.

Of late, because of the increasing middle class incomes and explosion of opportunities, upper middle class parents are more concerned about the ardor of exam preparation. Tiger moms, like tigers, are becoming a declining species. The mental agony of exam preparation is driving the popular pressure to reduce syllabus. The urban middle class, which has a disproportionate influence due to social media, are more vocal about the “burden for children”. Prime Minister Narendra Modi penned a book, Exam Warriors, on facing exams. But he cleverly and wisely did not dwell on the issue of syllabus. He rather focused on the art of tackling exams like a Zen warrior.

In making an education policy, adults decide for children. Parents decide based on their own current ideas of what they perceive as good for their own children - a sum total of their past experience, what they see outside, a fair bit of cognitive biases and importantly what they hear from “super adults”.

‘Super adults’ are authority figures like ministers, policy experts that parents hear through media and professors, school principals etc. who they interact with locally. Whether the ‘super adults’ act with a deeper philosophical and psychological understanding or they act on just “good intentions” is undecipherable. (As as aside, the principal of one of the best schools in NCR told this author that he intends to home-school his new born daughter to save her from adults!)

Modern day parenting has been influenced by ideas from elsewhere in the world and it is fair to say has softened a bit in urban India. It is not uncommon for a parent to talk about “feelings” to a child these days. A middle class child in the 70s or 80s usually got spanked. Also, because of nuclear families, schools are tasked with duties that were usually fulfilled by grandparents, such as value education, ethics etc. With finite hours in school, the teachers can only do so much, hence their backing for reduction in curriculum.

It is also because the number of children that score well are a small minority compared to the children that are disappointed (90 per cent, let’s say) by exam results and end up with a dented self-esteem. So there is a tyranny of majority in the sentiment calling for reduction of burden.

There is a social angle to it as well. It is not uncommon to learn about children from a poor household acing board exams and other syllabus-heavy competitive exams like Chartered Accountancy or the Joint Entrance Examination (JEE). The exams have levelled the playing field and the elites might be upset about it. If the syllabus is reduced, it lowers the bar and role of ability and effort is reduced.

Another common complaint is about rote memorisation. More the syllabus, more the “mugging” is the common refrain. In an NDTV show, a suave South Delhi child complained about memorising chemistry formulae! In our gurukuls in the past, students used to cram the shastras without understanding, only to decipher the deeper meanings later in adulthood. In our own lives the mantras or poems or multiplication tables that we “mugged” as children would have proved to be helpful later. On the other hand, there is an argument for delaying knowledge dissemination as well. Many attributes required for professional success are learned on the job much after formal education. For example, even a mechanical engineer from a top college in India would know the intricacies of an internal combustion engine only when she/he starts work as a trainee engineer. (That she will learn from a mechanic, who earns a fraction of what she does in another story altogether)

Other public intellectuals also add to the moral panic. Leave alone India, nobody seems satisfied with education system in any country at any time. There is always some other country doing so much better or that we are letting down the future generation etc. This puts further pressure on the policy makers to “do something”.

Let us come to policy making on such issues and its broader implications. Even in normal circumstances, the bureaucracy claims expertise in things it does not possess, as its competency is that of facilitation and administration. In case of education, this hubris is even more exaggerated since all of them have gone through school or have children going through school and thus have abundant “field experience”.

There is no rigorous preamble to the suggested move by the HRD Ministry in the form of reports from latest scientific research on developmental psychology or advances in pedagogy and access to information through technology or even national competitiveness priorities. The Minister just mentioned that the purpose of education is to make good human beings and that there should be space for development of all-round abilities.

The introductory brief in the web page set up for offering suggestions says that the objective is “to develop a fairer and more egalitarian society comprising of well-balanced human beings”. A policy made on such hazy moral foundations pose a grave threat. It will be important for the HRD Ministry to communicate clearly and provide comfort and direction on the “why now”. This will also provide direction to public consultations so that they will yield more signal than noise. With the mission statement of “halving the syllabus” already articulated, it will be interesting to see how ideas crowdsourced from experts meld with it.

So it is only fair to say that we are operating in a “we don’t know what we are doing, but we have to do something” territory. We do not know the hows, whens or whats. Hence this syllabus reduction business is just shooting in the dark. However, governments will continue to meddle with education. Harvard economist Lant Pritchett has explained why governments have arrogated to themselves the role of “public arbiter of value”.

The woes are compounded by other policies. We have not allowed complete autonomy to our own schools to learn from the best. “What are the best practices that will fit our cultural milieu in this age?” has become a hard question to answer. If we look outside India, we might get some clues but we would still be reluctant to adopt it whole heartedly because we will be unsure if it will fit in our scheme of things.

Will the Korean model that resembles our current system work? Will Singapore’s model that is reengineering its teaching to “enhance creativity” work for us? Or will the current US public school system that allows for a variety of experiences with low academic load fit us? Or will adopting techniques of new age schools operated by Silicon Valley folks like Elon Musk help us make a leap? It is unclear if our policy makers have studied them deeply.

Just spouting “Finland model” etc, makes no sense if it does not look at what kind of economy are we expecting in the next couple of decades and what skills are required for our children to thrive. Strategic thinking or even bottom-up thinking based on skills mapping exist only in theory. Maybe the New Education Policy which is being formulated might throw some clues.

The conundrum is best summarised by B F Skinner, who said: “When Milton's Satan falls from heaven, he ends in hell. And what does he say to reassure himself? 'Here, at least, we shall be free.' And that, I think, is the fate of the old-fashioned liberal. He's going to be free, but he's going to find himself in hell.”

Hope we don’t end up there. Hope, though not the best strategy, is all what we can do.