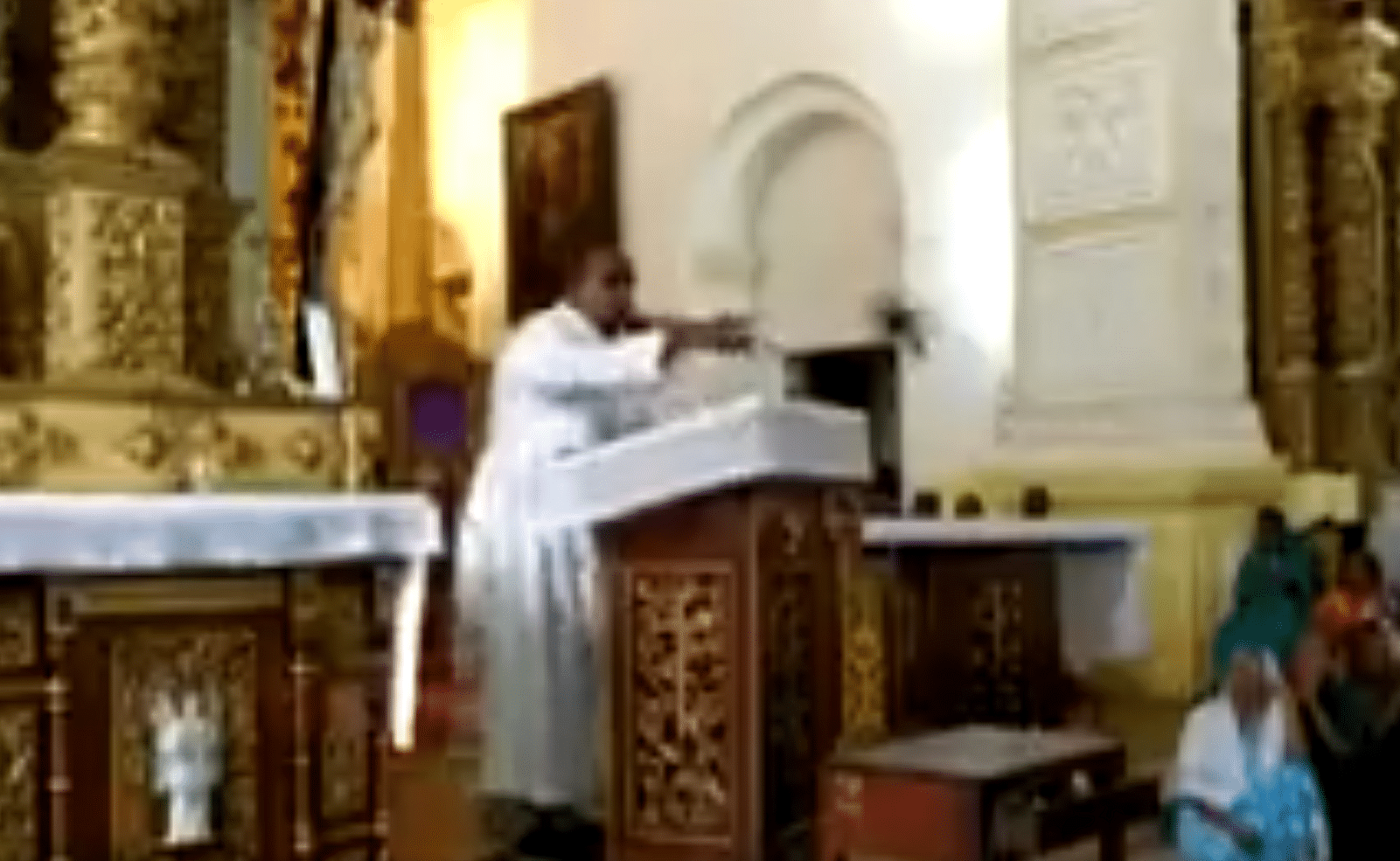 In a video making rounds on social media, a Goa Christian priest is seen calling Bharatiya Janata Party (BJP) president Amit Shah a ‘devil’ and threatening people who vote for BJP with God’s punishment in his church sermon.

Distressed by his community members voting for BJP, the priest said, "Today, some are running after BJP, but think of your kids. BJP people poured petrol on children and burnt them alive. This is the BJP. Modi has bought all channels."

The Padre, speaking in Konkani, also said that God punished Manohar Parrikar with cancer who had his “pockets full”. In what seemed like an attempt to incite fear in the flock to not vote for BJP, the Christian priest said, “If you insult God, you will be punished, whether you are PM or PM’s father. Parrikar changed law on holiday of Francis Xavier. He died in pain."

Continuing his speech, the priest called Amit Shah a “devil”. He said that Shah used to arrest Muslim youngsters and shoot them, adding, “Narendra Modi has burnt thousands of Muslims in Gujarat including an MP, and you are running behind the BJP.”

In complete disregard to Goa inquisition, the Padre also praised the Portuguese, saying that Hindus, Muslims and Christians lived peacefully under its 500-year-long reign, while BJP destroyed that peace in only 5 years.

The video was shared on social media by Francisco Xavier Pacheko, allegedly a Goan politician, with caption, “When our religious leaders preach, we are duty-bound to follow.”

The video generated much criticism over church interference in politics. Former Goa Congress leader Savio Rodrigues called it ‘disgusting to the core’ and urged BJP Goa to act against the ‘communal sermon’.

Saw the video. Disgusting to the core. Sad that some Christians actually listen to such flith. You might not like a political party but you cannot use the Church as a place to share your political views. BJP Goa must act against this communal sermon. https://t.co/3aPC69tXkW

It is not the first time that church has interfered in Indian politics. Recently, Election Commission had to ban campaigning for Lok Sabha Elections 2019 near Goa churches on Good Friday. Last year in October, a Mizoram church had expelled its pastor for contesting elections on BJP ticket.

In 2017, while Archbishop Filipe Neri of Goa and Daman had warned against “a kind of monoculturalism” in India, Archbishop of Delhi Anil Couto, in a letter written to heads of local churches called for a “prayer campaign” ahead of the 2019 elections against a “turbulent political atmosphere” that threatened democracy and secularism.

Before last assembly elections in Goa, in 2016, Archbishop Neri had said the “Church would guide the faithful on voting.” In 2017, ahead of Gujarat assembly elections, a pastoral letter by Archbishop Thomas Macwan of Gandhinagar asked the faithful to save the country from “nationalist forces” by electing those who were “faithful to our Constitution”.

Couched in indirect references and vocabulary from Constitution, the formal exchanges of church functionaries raise serious concerns that Church actively tries to influence the vote of its followers in the name of religion.

As early as in 1951, Bishop Matthew Kavukattu of Changanacherry (Syro-Malabar) diocese in Kerala had declared that the church “neither can nor does ignore temporal matters, because the world in which we live is the only path leading us to our eternal home,” indirectly justifying interference of church in Indian politics.

In 1957, the standing committee of the Catholic Bishops’ Conference of India (CBCI), the apex body of the Catholic Church in India, issued a statement to be read out in churches across the country which said that it was the “responsibility of each Catholic to… not vote for any party or individual contesting against God and universal Church.”

Already mired in controversies over culture of sex-abuse, forced conversions, Hinduphobia, land scams and illegal foreign funding, the church is under the public eye for active and blatant interference in politics.