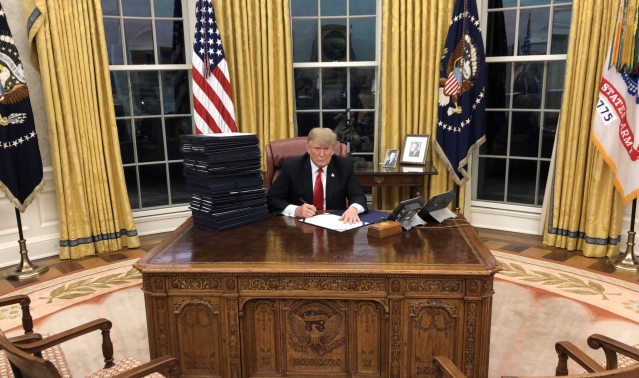 US President Donald Trump on Tuesday (20 February) described the Pulwama terrorist attack as a "horrible situation". He said he would issue a statement on the same after receiving reports on the issue from officials, reports Times Of India (TOI).

"That (the terrorist attack) was a horrible situation. We are getting reports. We will have a statement to put out," Trump said.

"I have watched. I have got a lot of reports on it. We will have comment (on it) at an appropriate time. It would be wonderful if they (India and Pakistan) get along," Trump added.

In a separate news conference, US State Department deputy spokesperson said that the US was in contact with the Indian government "to express not only our condolences but our strong support."

He also stated that the US was also in touch with Pakistan and added, “We urge Pakistan to fully cooperate with the investigation into the attack and to punish anyone responsible."

US National Security Advisor John Bolton affirmed his country’s support to India’s right to defend itself.

"I told Ajit Doval today that we support India's right to self-defence. I have spoken to him twice, including this morning... and expressed the US' condolences over the terrorist attack," Bolton told Press Trust of India on 16 February.

On 14 February, a terrorist of Pakistan-based terror outfit Jaish-e-Mohammad targeted a CRPF convoy with a car bomb at Awantipora in south Kashmir’s Pulwama district.