Enemy Within: Bangladesh Should Purge The State Machinery Of Islamists 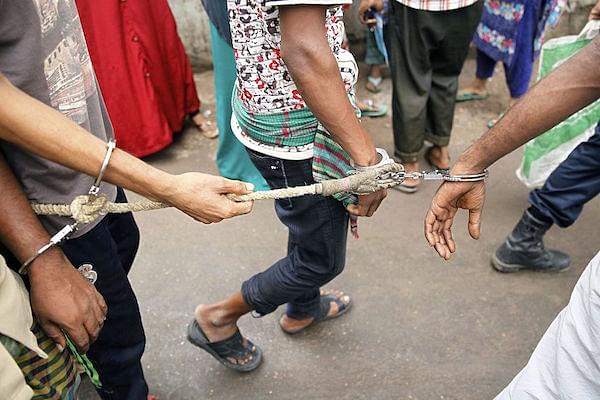 The letter carrying the death threat received by a senior monk at the Ramakrishna Mission at Bangladesh capital Dhaka last week contained an important underlying narrative. Purportedly sent by the Islamic State (IS), which the Bangladesh government claims has no presence in that country, the letter warned that it would be futile to approach the police since powerful officers in the force were sympathetic to Islamists.

Even as the Sheikh Hasina government is reportedly engaged in an all-out offensive against Islamic radicals in Bangladesh, more and more voices are being heard in the country about Islamic radicals having powerful backers within the state apparatus.

The week-long anti-militant drive from June 10 to June 17 was successful, claimed the government. It led to the arrest of more than 10,000 people, including 194 suspected militants, 151 of them from the banned Jama’atul Mujahideen Bangladesh (JMB). But not many Bangladeshis, including prominent members of the minority communities who have faced the brunt of attacks by machete-wielding Islamic radicals, as well as civil society members and human rights activists, are convinced about the efficacy of the drive.

That’s because there’s a strong suspicion that Islamic radicals in Bangladesh have powerful backers within the establishment, even within the security apparatus. This suspicion is not unfounded.

The ‘Arabisation’ of Bangladesh began immediately after the assassination of Bangladesh’s founding father Sheikh Mujibur Rahman (Mujib) on 15 August 1975. One of the first acts of Khondaker Mostaq Ahmad, who became the country’s president after Mujib’s assassination by some junior army officers, was to proclaim Bangladesh as an Islamic Republic. After this proclamation, political Islam had a free run in Bangladesh.

The military rulers slowly rehabilitated the Bangladeshi war criminals who had committed unspeakable atrocities, including mass murders and rapes, during the nine-month war of independence in 1971. Mujib himself had, in fact, altered his initial harsh stance towards the collaborators of the Pakistanis and declared a general amnesty for them in December 1973. By doing so, he uncorked a monster since all these collaborators were right-wing Islamist radicals with deep ties with the Pakistanis and sympathetic towards that rogue country. They became the torchbearers of Islamic fundamentalism.

General Ziaur Rahman, who assumed power in 1977 and became a military dictator, took the policy of Islamisation forward. He started actively courting the Islamic clergy, especially the Saudi- and Pakistani-backed mullahs to legitimise his rule. He not only gave amnesty to many accused of heinous crimes in the 1971 war but also gifted them positions of power and influence. He systematically demolished the secular fabric of the country and reversed the secular policies of Sheikh Mujib.

Bans on Islamic fundamentalist parties were lifted and, with the passage of time, these fundamentalists infiltrated the army and security forces, the police, the bureaucracy, and the political parties.

After Rahman’s assassination on 30 May 1981 in a coup staged by some army officers, Lieutenant General Hussein Mohammad Ershad became the military dictator and continued the policy of Islamisation aggressively. He declared Islam as the state religion in Bangladesh in June 1988.

The sheer power the Islamists have come to wield in Bangladesh today can be judged from the fact that when this move (Islam as the state religion) was challenged in the Dhaka High Court in March this year, the Hefazat-e-Islam, which many suspect is a front of the Jamaat-e-Islami Bangladesh, warned the court against passing any order that would reverse the 1988 law. The court, of course, obliged without even hearing the petitioners.

After the military regimes, the Bangladesh Nationalist Party (BNP), founded by Ziaur Rahman and headed by his widow Begum Khaleda Zia, continued the Islamisation agenda with greater vigour during its stints in power from 1991 to 1996 and from 2001 to 2006. The BNP took in the Jamaat-e-Islami Bangladesh as its ally and inducted Jamaat leaders in the Zia cabinet. The BNP thus gave the Jamaat political legitimacy.

All these years, the killers of Sheikh Mujib and all the right-wing Islamic fundamentalists, who had helped the Pakistani army carry out the horrendous genocide of Bengali-speaking Muslims and Hindus in 1971 were allowed to return to the country and even rewarded with posts and power. Many of them are now in senior positions in the armed forces, the paramilitary, police, bureaucracy, judiciary, media, and the political parties. Even some leaders of the ruling Awami League have close links with Islamist fundamentalists.

The Jamaat and other Islamic fundamentalist bodies run many profitable business enterprises in Bangladesh, including the Islamic banks. They have enormous stakes in the legal money exchange and the illegal hawala businesses, mobile telephony companies, as well as shipping, garments, and other sectors. Funded by Pakistan, Saudi Arabia, and other wealthy Gulf countries, which followed the austere Salafi-Wahabi strand of Islam, these organisations also run thousands of ‘Qawmi Madrasahs’, where hardline Islam is taught and from where thousands of firebrand mullahs graduate every year.

Given this situation, it is tough for the Sheikh Hasina government to root out Islamic fundamentalists and fundamentalism from Bangladesh. The efficacy of the week-long anti-militant drive that ended recently is seriously questioned. The willingness, and the capability, of the law enforcement agencies, which have right-wing radicals in their ranks, to seriously crack down on Islamic fundamentalists is, therefore, in serious doubt.

One instance will suffice to illustrate this point. Golam Faizullah Fahim, an 18-year-old who was nabbed by people while fleeing after attacking a Hindu mathematics teacher and handed over to the police, was ‘killed’ in what is widely believed to have been a staged encounter four days later. This led many to question why he was killed.

Bangladesh’s leading English daily The Daily Star, in a front-page article, alluded that Faizullah and other Islamists caught by the law enforcers were being eliminated so as to prevent any chances of their spilling the beans and naming people in senior positions in the establishment. This view is widely shared in Bangladesh.

The Awami League government, which has the full backing of India, needs to start its anti-Islamic militant drive by first cleaning up the state machinery and purging all Islamic radicals and their supporters, no matter how far up in the hierarchy they may be. The enemy within is, after all, much more powerful than the enemy outside. It is going to be a tough task, and serious attempts will definitely be made, like the one in January 2012 by serving and former army officers, to dislodge the Sheikh Hasina government and even eliminate her.

She will thus need more support from India and powers like the UK and USA. But the government should be made to stay the course and not be allowed to take advantage of the anti-militant drive to target Opposition figures as is happening now. The battle against Islamic fundamentalists in Bangladesh is a crucial one, and it is in the interests of India and the free and secular world to ensure that this battle is won by all means.

If Bangladesh wins this tough battle, the signal will go out that similar battles against Pakistan and Gulf-backed Islamic fundamentalism and extremism in other parts of the world can also be won. As for India, this battle has serious security implications.