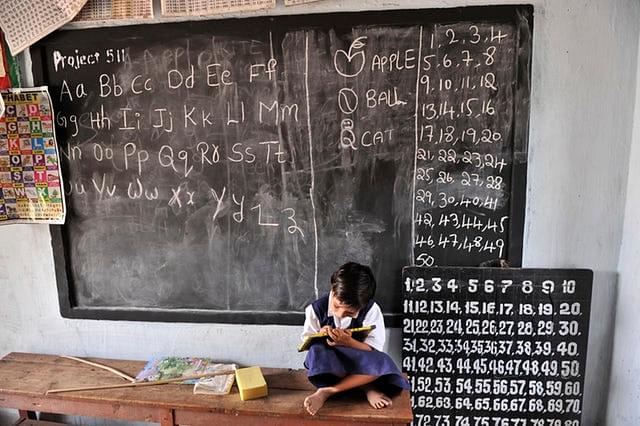 A child in a classroom

The Right of Children to Free and Compulsory Education Act or the Right to Education Act (RTE) was supposed to drive India’s big leap in social development. It was supposed to bring millions to school, building the foundations upon which a modern, progressive and prosperous nation was to rise.

Seven years later, those hopes and aspirations have been belied. Learning outcomes have deteriorated, schools are being closed and entire cohorts are graduating ill-educated and unprepared. The RTE has proved to be a disastrous piece of legislation. Against this backdrop, the Narendra Modi government’s decision to scrap one of its most controversial features, the no-detention policy (NDP), is an important first step towards mitigating some of its worst consequences.

The NDP was interpreted as a call for all students to be automatically promoted to the next class, without having to take any examinations until Class VIII. In the seven years that it has been in effect, it has, however, done nothing to improve learning outcomes. The latest edition of the well-regarded “Annual Status of Education Report” (ASER), which measures overall learning levels, has found, yet again, that learning outcomes remain below par. Less than 48 per cent of children in Class V can read a Class II-level textbook; only 43.2 per cent of Class VIII students in rural India can do simple divisions; only one out of every four students in Class V could read an English sentence.

The NDP has also been found to be faulty by the comptroller and auditor general as well as the Central Advisory Board of Education. More than 20 states and union territories have asked for the policy to be either scrapped or modified. In short, there is now overwhelming evidence that the NDP has failed, and the sooner the system is fixed, the better.

Supporters of the NDP may argue that the policy – successfully deployed in countries known for their high-quality education systems, such as Finland and Japan – wasn’t properly implemented in India. They are right. The NDP was supposed to be part of the larger continuous and comprehensive evaluation (CCE) effort which replaced the annual examination system. The CCE, however, was stillborn – at least in part because teachers were never really trained in how to implement the new methods of evaluation and interpreted the policy as one that required no assessment at all. The problem is that even today, there is no clarity on how this issue can be resolved given the far-from-optimal ground realities.

NDP cheerleaders also claim that the objective of the policy was to keep students in school and prevent dropouts – and in that, it has succeeded. Herein, it is important to ask: What is the point of students staying in school if they are barely learning anything at all?

In fact, this question can be extended to the enrolment factor as well. Champions of the RTE point out that since the law, making access to free and compulsory education a fundamental right for all children between the ages of six and 14 years, came into force, the country has attained almost universal enrolment. Apart from the fact that this isn’t entirely correct (enrolment rates were high and improving even before RTE, thanks to much older schemes such as the mid-day meal scheme and the Sarva Shiksha Abhiyan (SSA), here too one must underline the risks of conflating schooling with learning.

Indeed, this dichotomy is reflective of the larger, more fundamental problem with the RTE: its heavy focus on inputs while effectively ignoring outputs. The Act, for instance, makes it compulsory for schools to reserve 25 per cent of seats for poor students, mandates a high teacher-student ratio, enumerates expensive standards for school buildings and infrastructure, defines working days and teacher hours, etc., but doesn’t offer any benchmarks for learning outcomes or link teacher assessment to student performance.

This, in turn, has had a debilitating impact on budget private schools which catered to a large number of poor students. Many such schools, which barely charged a few hundred rupees in student fees, have been shuttered since they could no longer afford the RTE requirements. A school in an urban slum is going to have a difficult time trying to build a playground, after all. According to the National Independent Schools Alliance, a grouping of budget private schools, Delhi alone closed 3,000 schools in 2015-16 while Maharashtra served closure notices on 7,000 schools. In contrast, government schools have no such worries because they are “recognized” – simply by virtue of being a government agency. Therefore, they can take their own sweet time to comply, if at all, with the RTE requirements. This is also true of minority-run institutions (both aided and unaided) which stand outside the ambit of the RTE and are seen as being favoured over majority-run institutions.

What makes all this particularly galling is that data shows that even poor parents prefer to send their children to budget private schools instead of government schools which are free. Also, studies have shown private schools are more cost-effective than government schools and deliver slightly better learning outcomes. In fact, the landmark Andhra Pradesh School Choice Project by Karthik Muralidharan of the University of California, San Diego found that even though private school teachers are less educated and not as well paid as their government counterparts, they still perform better in terms of fewer absences, longer workdays, etc.

In other words, the RTE has resulted in shutting down those schools that students wanted to attend while giving preferential treatment to those that they didn’t care for. It has, on the whole, promoted an education system that focuses on just about everything else but education.