When Karunanidhi Asked Reporters ‘Shall We Set Maran, Stalin Afire On Anna Salai?’ 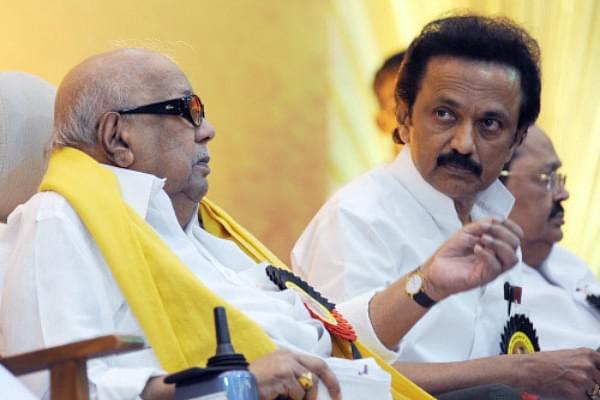 M Karunanidhi and his son Stalin

Twenty-five years ago, the Dravida Munnetra Kazhagam (DMK) was in the throes of a crisis. The party was unhappy with the behaviour of one of its senior members Vaiko (then V Gopalasamy), particularly since he clandestinely went to Sri Lanka and met with the Liberation Tigers of Tamil Eelam (LTTE) supremo Velupillai Prabhakaran. The reading within the DMK was that perhaps Vaiko was trying to project himself as the next leader and probably claiming seniority over its leader M Karunanidhi’s son M K Stalin. Vaiko was issued a show cause notice and indications were that either he would be thrown out of the party or he would be forced to quit.

In such circumstances, Karunanidhi visited Coimbatore. The visit had the usual ingredient of the DMK leader meeting the press. That was this my first face-to-face with the former chief minister, who I had the opportunity to speak to four more times. The press conference was at Surya Hotel (now Taj Surya) where the late leader ran into some real tough time. Reporters of a particular Tamil daily group gave him a torrid time, throwing up tough questions one after another on the Vaiko episode. The reporters, in particular, asked about his nephew and the late Murasoli Maran’s statements on Vaiko and attempts to sideline the latter in favour of Stalin.

Karunanidhi lost his cool over persistent questioning that seemed to be in sympathy with Vaiko. In a fit of rage, he asked: “So, shall we set Maran and Stalin on fire on Anna Salai?”. The press conference ended then and there. But his remarks echoed at a public meeting that evening at VOC park. Speaker after speaker pointed out to these remarks and said they were pained over their leader’s anguish. In fact, those remarks seemed to have shut his critics’ mouth at that time.

A few months later, Karunanidhi again visited Coimbatore and as usual a press conference was held. This time, the reporters were quiet and didn’t even have a question to ask. Some mundane questions were asked but then this writer chose to ask him a couple of uneasy questions. With the Vaiko issue still prolonging, Karunanidhi had gone around the state telling people that the LTTE was trying to belittle him while glorifying Vaiko. Another thing that Karunanidhi and other DMK leaders were telling the people was that his life was under threat from such organisations.

“Why should you tell openly that Vaiko is being glorified and you are being belittled? Isn’t that something that lowers your own image in the public?” I asked to which Karunanidhi had no answer. I followed with the next question, asking why should they go about telling all about the threat? “Would it help someone else to attack and lay the blame on LTTE?” I continued but again he had no response. Senior leader Arcot Veerasamy, who was always with him then, intervened to say: “How can we keep quiet when there is danger to Kalaignar’s life?” The press conference didn’t take much time to end. As we were served breakfast, the late member of Parliament from Coimbatore M Ramanathan asked: “Sir, you are asking very tough questions!” and smiled.

The third time the Coimbatore press met Karunanidhi after that was just before the 1996 elections to the state assembly. The former chief minister was seen happy and looked confident to return to power. Reporters, who were then facing a tough time from the Jayalalithaa government for its anti-media stance and her inaccessibility, asked him if he would be as accessible as he was then if he came to power. “No, I will be always accessible to the press. I, too, am a journalist,” he said and even posed for a photograph with the reporters who had turned up at the press conference.

The fourth occasion was after Karunanidhi returned to power in 1996 and held a press conference in Salem. The press conference had the usual stuff of asking his view on the newly sworn-in Deve Gowda government at the Centre and the allegations of corruption against Jayalalithaa. But this writer had a question on a bomb blast that took place at Vazhapadi near Salem a few months before the 1996 elections. Explosives were kept in a milk can and they went off near the Vazhapadi bus stand at 8 pm where over 15 persons were waiting for a bus. At least a dozen were killed and an important All India Anna Dravida Munnetra Kazhagam functionary Ramesh suffered serious head injuries. (He was shifted to NIMHANS, Bangalore). Then the director general of police W I Dawaram said a probe would be conducted and the guilty would be brought to book. The case saw no movement and this was the trigger for the question. Karunanidhi told the press that a fresh investigation would be held but till this day, not a single person has been held responsible for the blast.

My fifth interaction with Karunanidhi was along with the then US Consul General in Chennai, Phillip Min. The meeting was held as part of the Chennai US Consulate efforts to reach out to various political parties. It was in February 2016 at 5 pm. As one representing the US Government, my role was to translate what Min told Karunanidhi and vice-versa. The DMK leader was recuperating then from his illness but then was alert enough to answer all the questions or clarifications that Min asked. Karunanidhi recalled his visit for an eye operation at Brooklyn in the US. He said George Washington was his favourite US leader and even recalled that his visit to Washington statue was his best.

But there was one big change from the previous four meetings. At his meeting with the US Consul General, Karunanidhi couldn’t speak clearly. His tongue had twisted and it was difficult to follow what he was saying. Luckily, one of his personal secretaries Rajamanickam helped in understanding what he was saying. It was a meeting that made one realise the clock was ticking.