Without Raja’s Sanction, Low-Level Babus Had No Incentive To Help Companies Named In 2G Scam 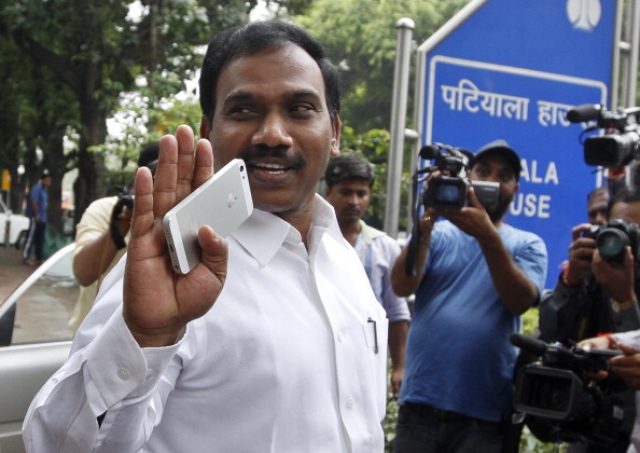 Former Union minister A Raja leaves the Patiala House Court complex after the hearing in the 2G case in New Delhi. (Sanjeev Verma/Hindustan Times via GettyImages)

Charge: A Raja and Siddhartha Behura asked Department of Telecom (DoT) officers to put up a note for recommending intra-­service roaming arrangement between two service providers by amending the terms and conditions of UAS licence. Telecom Regulatory Authority of India (TRAI) objected to it (via letter dated 24.04.2008) on the ground that such amendment required compliance with Section 11 of the TRAI Act. But Raja and Behura unauthorisedly proceeded to amend the licence agreement to make it mandatory for all service providers. This ended up benefiting Swan Telecom Private Limited (STPL) alone since it had successfully signed a Memorandum of Understanding (MoU) with Bharat Sanchar Nigam Limited (BSNL) for such an arrangement on 13.10.2008.

The defence’s counter is that officials at DoT and BSNL were acting on their own and there was no conspiracy. Also, roaming agreement between two service providers was in public interest.

According to Judge Saini, the originator of this note was Sukhbir Singh as the official records reflect. Behura and Raja had nothing to do with it. They simply agreed with Sukhbir Singh’s policy recommendation.

Mittar told the court he was asked by Behura to put up the note. “I was asked by Secretary (T) [Behura] and Member (T) to put up a note making intra-­circle roaming arrangements mandatory, but I submitted that it can only be a mutual commercial arrangement between various service providers.”

Judge Saini writes that “evidence indicates that the note would and should be taken to be put up by Sh. Sukhbir Singh in his own wisdom in ordinary course of official business.” This is a pattern that runs throughout the judgement. Everything was being done by lower level bureaucrats as their name and signature appear on all proposals that led to the 2G fiasco despite the fact that so many of them have deposed that they were simply following the orders of their bosses. However, the court agreed with the defence, which maintained that Raja and top level bureaucrats merely agreed with the proposals sent to them. At the risk of repeating myself, I dare ask: what was the incentive for these low rung babus to originate proposals that ended up benefiting companies the prosecution is alleging to be in cahoots with Raja?

Anyway, Sukhbir Singh (officially) wrote this note the day Member (T) was on leave. The judge questions the hurry on Singh’s part and points to Raja’s signature, which came six days after Behura approved the policy. If it was Raja who was in hurry, the Judge reasons, he wouldn’t have waited for this many days, not to mention the fact that Raja wanted Behura to discuss it with industries (sic). One wonders how can this be presented to counter the wrongdoing on DoT’s part. Approving a policy amending UASL within a week can hardly be used to point to no hurry on Raja’s part.

However, the judge rightly mentions that even before DoT started discussion around having roaming arrangement, BSNL was already deliberating on it as the note dated 28.05.2008 shows. It reads: “Recently, several additional licenses have been granted for Mobile Service. The new Operators have had discussions for having the roaming arrangements with BSNL”. But this doesn’t necessarily prove there was no conspiracy as only STPL and Datacom clinched the deal with BSNL for roaming when many companies such as Reliance, TTSL and Spice had also applied for the same.

In fact, BSNL management committee had considered the issue of entering into roaming arrangement with other companies on 10.06.2008 but it was not in favour of this. It is pertinent to note here that, exactly the next day, Raja signed on DoT’s policy amending UASL to make intra-­service roaming arrangement between two service providers mandatory. This may not prove conspiracy but certainly doesn’t look kosher, at least to this author. Something black in the lentils!

Less that two months later, on 27.08.2008, the BSNL board also approved the roaming arrangement policy and on 12.10.2008, BSNL signed MoU with STPL. Additionally, the policy approved by BSNL board restricted “intra circle roaming arrangement with operators having overall all India market shares of 5 per cent or less. According to this condition, M/s Swan & M/s Datacom only, as on date, out of requests received, qualify and both are included in the comprehensive note for consideration by the Management Committee of BSNL-vide note placed in file as 35/c.” The whole lentil is black!

The judge cites deposition of STPL officer who negotiated on its behalf with BSNL. He explained the reason why BSNL chose STPL: “It is correct that the reason for considering the application of STPL for roaming (intra-­circle) by BSNL was that other applicants had substantial subscribers base and in case of their getting the roaming facility they would be competing directly with the BSNL (objected to by public prosecutor).”

Apparently, this is the reason why BSNL got into arrangement with a relatively new telecom operator. Judge Saini found this a reasonable explanation. But is this a common practice? Counter argument could be that if BSNL had entered into arrangement with bigger players, it could’ve earned more benefit from their subscriber base also, isn’t it?

Evidence: Some facts are not in dispute as proved by documents provided to the court: STPL’s Chief Regulatory Officer Dr. Vinod Kumar Budhiraja proved the lease deed between Associated Hotels Private Limited and R K Chandolia. D B Realty Limited’s vice-president (Regulatory) Vijender Kumar Sharma proved the payment of rent to Chandolia. Municipal Corporation of Delhi Inspector Vijay Kumar proved that the leased property to Associated Hotels belonged to Chandolia and his wife Neeta. It’s not at all difficult to prove if Associated Hotels is a sister concern on D B Realty. But Judge Saini ruled that “even if this fact is correct, merely renting out the property does not show anything more than an ordinary relationship of landlord and tenant between Sh. R. K. Chandolia and Sh. Shahid Balwa. It is not indicative of any conspiracy by itself.” This is absolutely shocking observation. Did it not occur to the court that of 1.2 billion people in the country and over 1.8 crore people in Delhi, Chandolia found only one company to lease his property which allegedly belonged to the people who got telecom licence when Chandolia was at the helm of affairs at DoT?