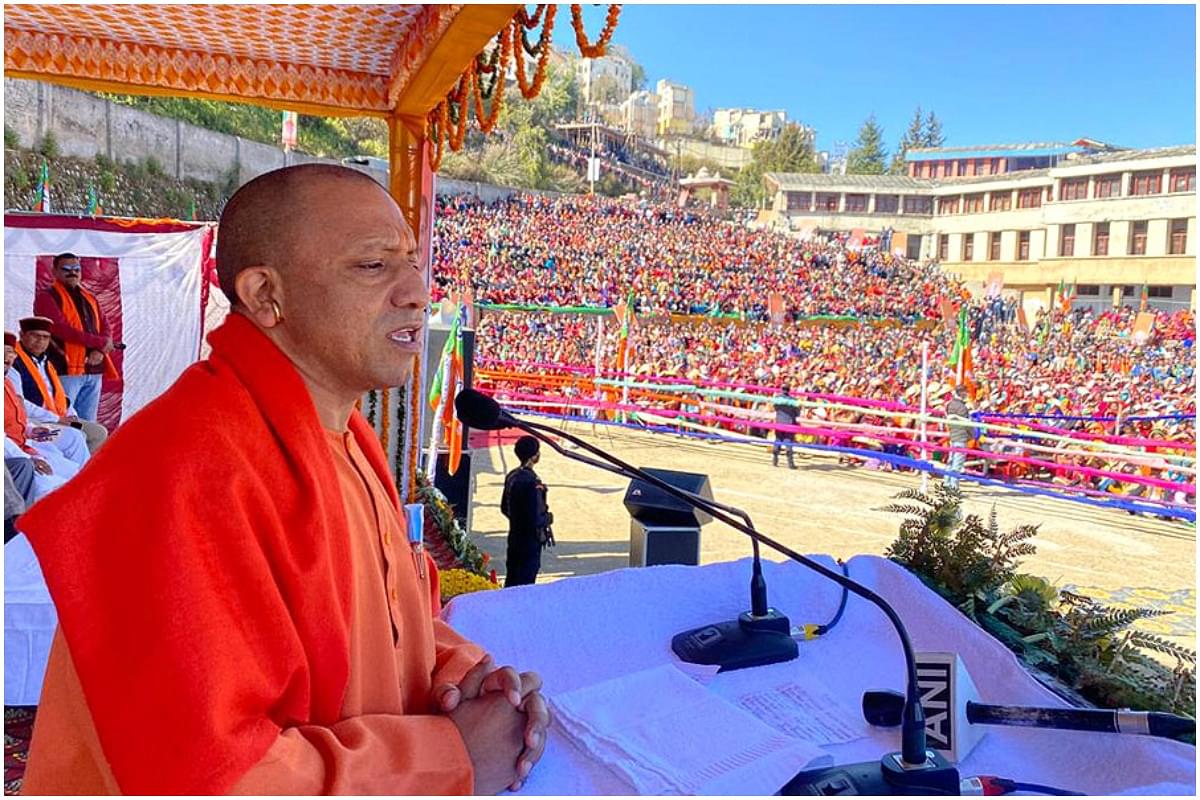 A day after voting in Uttarakhand, Bharatiya Janata Party's candidate from Kotdwar Ritu Bhushan Khanduri has said that she was able to build a connect with the women in her constituency during the time she had for campaigning.

Kotdwar registered 63.50 per cent voting. It is one of the assembly constituencies in the Pauri Garhwal district.

Khanduri added that her campaign was focussed on the issue of development, on nagar nigam and the welfare of people. Khanduri told this writer over the phone that if the BJP does not win from Kotdwar, it will be pushed back by 20 years.

On the last day of campaigning for the 2022 assembly poll, Kotdwar in Uttarakhand witnessed the Bharatiya Janata Party in an aggressive mode.

Uttar Pradesh chief minister Yogi Adityanath marked the campaign of Kotdwar candidate Ritu Bhushan Khanduri, daughter of former chief minister of hill state Maj Gen (Retd.) BC Khanduri, with a speech that the region will remember beyond March 10. On ground, the BJP managed to see people's emotion for Yogi Adityanath get attached to the party's narrative for a new beginning in this constituency.

Yogi Adityanath was given a rousing welcome at the "dwar of Garhwal" as Kotdwar is often described. This writer witnessed that people turned up in their support for not only the party and the candidate but also to get a glimpse of Yogi Adityanath -- "Maharaj ji ke darshan."

Women party workers, a woman candidate and women voters who have been the strength of PM Modi's journey in Uttarakhand, all seemed to present an evolving build up to Yogi Adityanath's speech and presence in Kotdwar.

People's emotion for Garhwal's own son came as a plus with the BJP. Women among the workers and voters could not keep themselves off the ground, boundary walls and terraces to find the best view to the dais where Yogi Adityanath was speaking.

People's emotion for "Maharaj ji" can be witnessed on ground in UP as well, but what emerged in Kotdwar was unique, instantly overwhelming, and had an extra dash of warmth. The past and present have an intriguing interplay when it comes to elections in Kotdwar.

Kotdwar is of particular importance to the BJP and Khanduri. It was here that her father lost the assembly election of 2012. This defeat came as a shock to the party and much was blamed on the infighting within the party. The narrative was about a major political party disrupting the BJP's vote back then.

In 2014, Maj Gen (Retd.) BC Khanduri returned to fight from the region, and was elected Member of Parliament from Pauri Garhwal constituency within which lies the Kotdwar vidhan sabha.

In 2019, Teerath Singh Rawat, known for his proximity to the former CM, won the Lok Sabha poll from Pauri Garhwal, defeating none other than Maj Gen (Retd.) BC Khanduri's son -- Congress candidate Manish Khanduri.

Ritu Bhushan Khanduri has seen all these events unfold before her. She had told this writer in this article that the events made her learn the ropes. In her Kotdwar speech on Saturday, she made use of the word "dhwast" (demolish) in repetition, attacking the Congress and explaining how she would work to bring positive changes in Kotdwar.

On 14 February, she fought against Surendra Singh Negi of Congress. Also in the fight is Dhirendra Chauhan, one of the six leaders expelled from the BJP for indiscipline who is fighting independently and claiming that the Congress and BJP have not lived up to the promises made in Kotdwar. Chauhan's presence is a point of interest to the local media for the numbers he might set ripples into and nibble into. Caste interplay could be seen becoming a factor in this constituency.

Local leaders in Kotdwar made a mention of the "mistake made in 2012" -- referring to the factors that contributed to the defeat of Maj Gen (Retd.) BC Khanduri. In all, there was a mention of all factors and aspects that surround Ritu Bhushan Khanduri. Leaders from Yamkeshwar, Pauri and Kotdwar mentioned how Ritu Bhushan Khanduri was not an outsider, for obvious reasons -- her belonging to the state, her "sasural" (the home of parents-in-law) belonging to the region, her father being the former CM "revered" in the region and state for his work and commitment.

Kotdwar is also known for the amalgamation of several emotions that make and shape the support to the BJP in the hill state. These are 'poorv sainiks' -- the ex servicemen; and families of soldiers serving the armed forces; the presence of Shri Siddhabali Dham -- a temple dedicated to Hanuman; Kanavashram; the emotion of being the gateway to Garhwal. Yogi Aditaynath mentioned that Kotdwar needs an MLA who will look after the work of preserving the spiritual and religious ethos of Kotdwar alongside development.

This writer was in Kotdwar on the last day of the campaign. Clearly, the BJP needs to take Kotdwar's betterment -- under a range of aspects -- on war footing if it wins here.

The ousting of the sitting MLA from Kotdwar, Harak Singh Rawat, was an event that made headlines last month. If Ritu Bhushan Khanduri wins, she naturally will need to drive her work to make a new place in state politics not only for herself, but also for some positive changes for and towards Kotdwar, which visibly speaks of the neglect by the previous MLAs.

Harak Singh Rawat was an MLA from the BJP from Kotdwar itself. This could give BJP's opponents a chance to rightly ask what was lacking in his work.

Khanduri adds that as a BJP MLA, Harak Singh Rawat worked for Kotdwar and development; the work done in Kotdwar by him in the last five years was a beginning made and that was because BJP MLAs work and are compelled to work and serve the people.

Kotdwar also happens to be Uttarakhand's first entry point to Garhwal from Uttar Pradesh's Bijnor district (via Najibabad). Going to poll along with Uttarakhand is Uttar Pradesh. In bold language, which is part of a refreshing move aiming for the twin win in UP and Uttarakhand, UP CM Yogi Adityanath and PM Modi, have mentioned in their speeches in Uttarakhand how the law and order situation and UP under the previous governments would pose challenges to Uttarakhand. The "MY" team (MY stands for Modi-Yogi) is going for a direct attack on the previous governments in both states.

Both Modi and Yogi Adityanath are mentioning how the safety of the hill state would be further ensured under a BJP-led government in not only Uttar Pradesh but also in Uttarakhand once again.

Kotdwar played the role as a junction on the last day for campaigning for the BJP as it saw the public and workers from the party assemble for a fiery speech from Adityanath. He was introduced as the CM of Uttar Pradesh but the son of Uttarakhand.

Last month, when the name of sitting MLA from Yamkeshwar constituency in Uttarakhand Ritu Bhushan Khanduri did not appear in the first list of candidates of the Bharatiya Janata Party, there was speculation in the media that she may not get a ticket in the assembly poll of 2022. She reportedly said: “I belong to a family in which we do not ask many questions. There must have been some good enough reason for not giving me the ticket." In her speech in the Kotdwar rally, Khanduri said that she began her career in 2017 with the support from the people of the region, fighting from Yamkeshwar. She got limited time for her campaign in Kotdwar and seemed to pour in her energies within the time at her disposal.

Kotdwar, its people and development, coaching centres to help the youth prepare for entrance exams to the armed forces; making women-centric livelihood stronger, the cultural uplifting of Kotdwar are issues that Khanduri and the BJP rested the campaign on. There are currently other issues that the 2022 assembly poll has brought to the forefront: a medical college (which CM Dhami has already given a nod to during the presence of Harak Singh Rawat as MLA), central school, roads between some vital destinations in Kotdwar. This one constituency, and the performance of the BJP involves the past and present in a bigger way than any other constituency in the hill state in 2022.