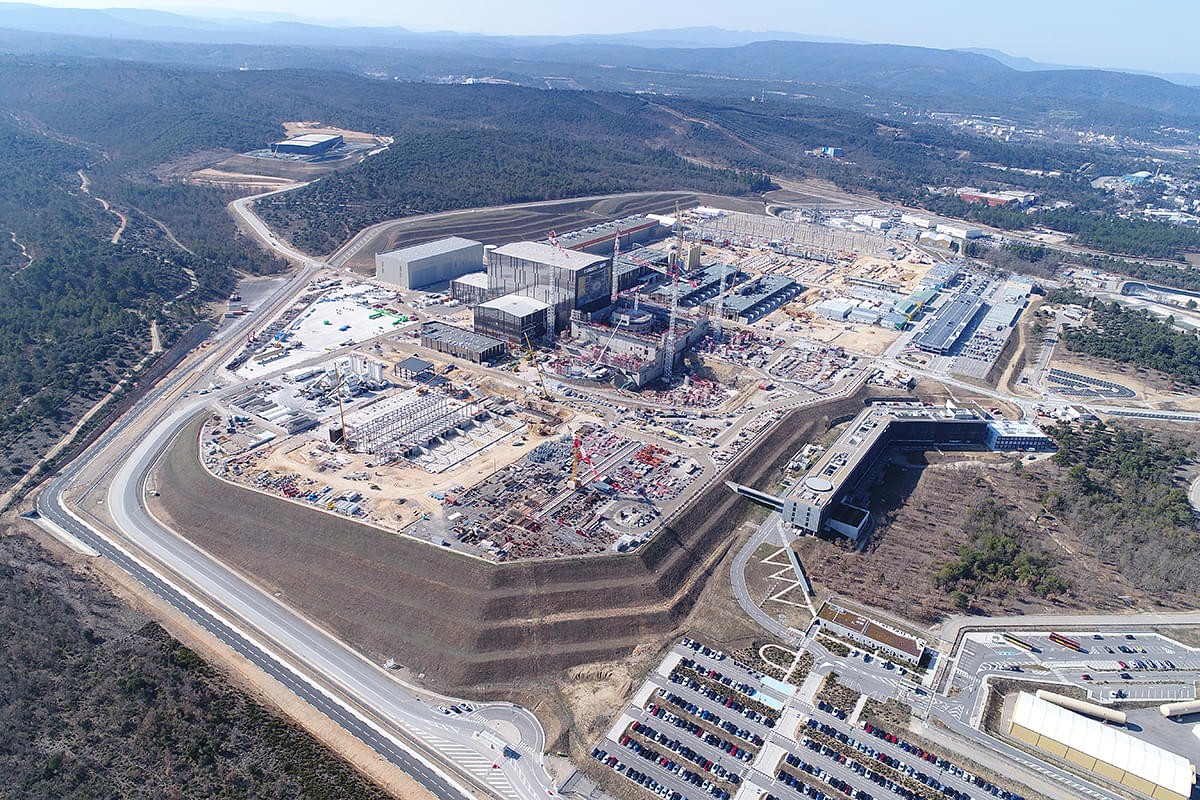 Aerial view of the ITER site during construction in 2018

The world’s largest experimental nuclear fusion project, one which may find a way to secure our energy needs in the future, achieved a key milestone recently.

On 28 July, a celebratory occasion marked the start of assembling major components that make up the fusion device.

The expectation is that five years later, the first plasma will be generated.

The process is nuclear fusion — when two or more light atomic nuclei fuse to produce a heavier nucleus, accompanied with an envious release of energy.

It’s what goes on in the core of our Sun.

To recreate that here on Earth is a challenge because we don’t have, say, the Sun’s gravity to help us fuse atoms effortlessly — which is why we need a fusion reactor to do that job for us.

And that is ITER’s aspiration.

The first plasma scheduled for 2025 will be humble and short-lived (if everything works out), but it will pave the way for the next big step for the project a decade later when fusion power generation will be shown as possible, viable, and sustainable — and without the blazing plasma heat of fusion (about 100 million Kelvin!) burning a hole in government pockets.

It’s taken three-and-a-half decades for this highly ambitious project to get here.

The need for international collaboration in fusion research was recognised in the 60s (at a time when bilateral partnerships were the norm), but it was only in the mid-80s that the idea began to take shape.

Soviet Union general secretary Mikhail Gorbachev had pitched the idea to United States President Ronald Reagan during the cold 1985 November at the Geneva Summit — at the peak of Cold War tensions.

In this cold, however, was sown the seed of an experiment that would generate the heat of the Sun — "widest practicable development of international cooperation" in nuclear fusion “...for the benefit of all mankind."

The mission was to show that fusion power is feasible.

The early partners were the European Community (now the European Union), Japan, the Soviet Union, and the US.

The project received the name “ITER”, for International Thermonuclear Experimental Reactor, meaning "the way" in Latin.

The tokamak technology was chosen for the reactor.

The Soviets had demonstrated in 1968 that it was an efficient way to go about producing nuclear power.

In this method, ionised gas or plasma is confined by externally produced magnetic fields.

The plasma provides the fertile ground for fusion to occur and for the resulting heat to be turned into power.

The price tag on the project was $10 billion and it caused much consternation among its members.

Paucity of funds caused several delays, to the point that it became harder to justify costs with little progress made on the ground.

The US, which in the late 1990s, said it would contribute only 5 per cent of the total project cost — a paltry share for a powerful country, eventually withdrew support in 1999.

The other members — Europe, Japan, and Russia — remained committed despite US exit, but made some alterations to their plans.

The cost was slashed to about $4.4 billion and a decision was made to pursue a simpler design and goals.

The member countries were on board, but also squabbling, mostly over who would pay how much, and who gets to host the experimental reactor.

For many years, Japan was in contention, facing competition from Canada (for a period before it exited the collaboration) and European nations Spain and France.

Japan was given additional benefits as consolation.

In the meanwhile, China and South Korea entered the ITER partnership in 2003, the same year that the US, under George Bush, Jr, administration, saw a return to the club.

It was settled; the host, Europe, would pay nearly half of the total cost, and the rest of the members shared the remaining cost equally.

But one more member was yet to join the collaboration — the second-most populous country.

In 2004, the European Union encouraged India to come on board.

India was formally inducted into the ITER project soon after.

India knew its energy needs were expanding and its population was rising. Any increase in the quality of life of its citizens involved the right balance between these two factors.

At the time in 2006, India made up one-fifth of the global population, but with a per capita electricity consumption of only a quarter of the world average and shockingly lower than that of developing countries.

It had to explore a new way to increase its energy production while also reducing its dependence on thermal and hydroelectric power.

Already India was generating power from nuclear fission (though making up only 2 per cent of the energy mix) and was turning to renewable energy (a similar proportion).

Nuclear fusion was a great avenue to explore.

India had a fusion programme running since the 1980s.

There were three tokamaks in operation — two homemade ones at the Institute for Plasma Research near Ahmedabad in Gujarat and an imported one at the Saha Institute of Nuclear Physics in Kolkata, West Bengal.

So, India already had some research and industry experience in the area.

It could, perhaps, bring that to the fusion table as part of ITER and strengthen it over the next couple of decades of project time.

In return, it could partake in the spoils if the experimental reactor achieved its goals.

In 2006, India and other members of the fusion collaboration signed the ITER agreement at the Elysée Palace in Paris to establish the organisation that would implement the fusion energy project.

In 2007, the organisation was formally established and things got under way.

ITER members had to contribute their share of the project’s cost largely in the form of equipment and components.

So contracts were awarded to industrial companies and research institutes in the participating countries.

India was responsible for fabricating and delivering nine packages, which over the years, it has diligently gone about doing and on schedule too.

ITER director-general Dr Bernard Bigot said in 2019: “The fabrication of this component has been an unprecedented engineering challenge and achievement in terms of both its massive size and its intricate specifications.”

The cryostat is the outer vacuum shell for the thermonuclear reactor. Manufactured by Larsen & Toubro in Hazira, Gujarat, the stainless steel vessel is 29 m high and 29 m wide and made out of 4,000 tonnes of stainless steel.

The manufacture and delivery of the cryostat had to be undertaken in parts.

The 1,250-tonne cryostat base was built and transported to the French site Cadarache in 2019 and installed at the Tokamak pit recently, on 28 May this year.

More recently, work on the final assembly part (the top lid) was completed and dispatched, in time for the start-of-assembly stage.

India was also responsible for the delivery of the cryogenic system.

This system will keep the ITER magnets cool. Magnets are critical in a tokamak — they produce the magnetic fields that confine and control the plasma.

The diagnostic neutral beam system designed and fabricated by India will help measure the Helium ash content in ITER plasma.

Some other India-made components include external heating systems for ITER plasma, vacuum vessel in-wall shields, a unique cooling water system, power supply systems, and diagnostic subsystems — all key components for the reactor, some of them first of their kind.

India has completed 50 per cent of the work assigned, ITER-India project head Ujjwal Baruah told The Indian Express in July.

Over 100 scientists and around 200 companies in India have been working in one way or another for project ITER.

Former Institute for Plasma Research director and Padma Shri, Professor P K Kaw, had said back in 2012 that this work would “allow us to leapfrog by at least a couple of decades”.

That seems to be the case at this stage. Plus, India’s ITER work fits right in with the more recent national themes of “Make in India” and “Aatmanirbhar Bharat”.

It took a little over two decades for the ITER project to kick off formally.

Struggles that were a feature in the run-up to the official start persisted even into the 2010s on account of cost escalation and repeated delays, pushing out due dates and raising doubts over the project’s future.

Significant events such as the 2011 earthquake and tsunami in Japan, Britain’s exit from the European Union, and the Covid-19 pandemic have occurred in the intervening time.

However, ITER has managed to keep going.

Looking back, the appointment of Bernard Bigot as ITER director-general seems to have been significant.

When he was about to take over in 2015, he felt he knew what needed to be done, some of which he expressed in the science journal Nature.

Four years later, progress was good and 60 per cent of the project was completed.

On the back of that good work, Bigot secured a second five-year term, starting 2020, at the end of which he would hope all assembled reactor components work as they ought to and the tokamak generates the first plasma, showing that the reactor concept works.

The eventual goal is full power and getting a 10-times-return on input energy — 500 MW of fusion power for 50 MW of injected heating power. This feat, if it came to pass, would be unprecedented; the fusion power gain is under 1 (Q<1) for any fusion reactor anywhere.

If ITER can crack this puzzle, it would pave the way for a more advanced machine that not only generates net energy but also translates it into usable power.

Perhaps, that is still a long way away — over two decades.

So for now, the focus will be on the smaller steps to get there.

The ITER members may just be telling each other the same thing.