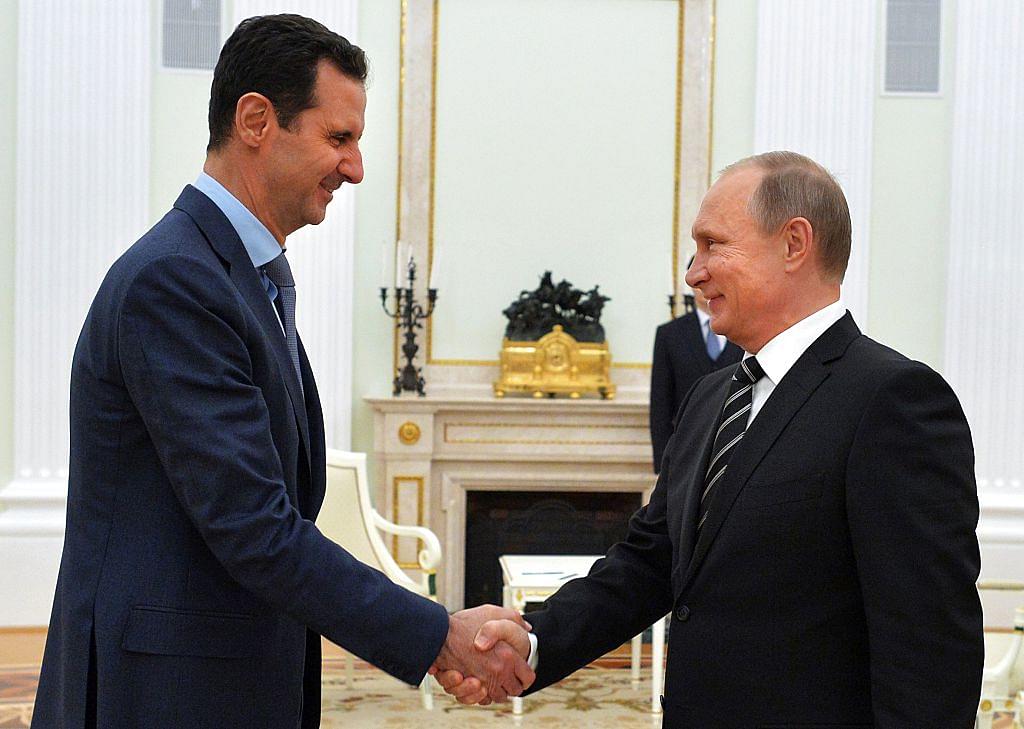 The West and particularly Europe’s failure to prevent Islamic State (IS) terrorist attacks on its big cities like Paris and Brussels is contrasted by Russia’s staggering successes against the militant organization in its bases inside Syria. Russian air and space forces hours prior assisted Syrian troops loyal to the Bashar al-Assad government to recapture the great Semitic city of antiquity called Palmyra. Russian President Vladimir Putin has already arranged for UNESCO to save such of Palmyra’s priceless heritage as has not been destroyed by Islamic State philistines.

Russia’s success against the Islamic State and Europe’s failure bears an uncanny resemblance to the tide of events in a global conflict of the last century that spread catastrophe everywhere. This is the Second World War. Until Russia’s predecessor state, the Soviet Union, intervened against Nazi Germany, the war was going in favour of Adolf Hitler’s ruthlessly efficient and enormously powerful Wehrmacht forces.

The West did not trust Soviet Russia from the first as war clouds began gathering over Europe. Western Europe has always treated Russia with scorn and disdain. Western militarists like Napoleon Bonaparte and Adolf Hitler considered the vast territories of Central and Eastern Europe fit for conquest and subjugation. Napoleon at least asked for the hand of the Tsar’s younger sister in marriage. Hitler harboured racist hatred for the Russians. He planned to starve Russia by annexing the rich agricultural lands of Ukraine. The British had already accomplished a variation of this programme in India when foodgrain was diverted to troops and caused the Bengal Famine.

In the case of both Hitler and Napoleon, it was Russian opposition that proved their nemesis. Taking their cue perhaps from the scorched earth policy of the Romans to counter the rebellious Maximin in year 238, the Russians laid waste the approaches to Moscow in 1812 to deter Napoleon’s Grand Armee. Ironically in the campaign, Napoleon was reading an account of Charles XII of Sweden who faced a rout in Russia in similar circumstances over a hundred years previously.

The lack of food and shelter in burnt out Moscow and the onset of the terrible Russian winter killed Napoleon’s hopes of seizing Russia. He retreated and the Russians followed him to Paris. He was finished as a world conqueror. When the Duke of Wellington dealt the final blow in Waterloo, Napoleon was a ghost of his former self, worn by exile, embattled and lacking in new tactics.

Russia again saved the West and the world from Hitler though Western powers spin it differently. The West was ready to accommodate the Fuhrer. This is what Neville Chamberlain meant when he spoke of “Peace for our time.” Hitler wanted a Lebensraum for Germans in the east and the West saw no reason to oppose him. It was World War I in another dimension. The West kept Russia out of the deal with Germany on Czechoslovakia. Joseph Stalin had to act with cunning and dispatch else Russia would be pulverised by resurgent Germany.

This was the basis for the Molotov-Ribbentrop Pact and the Russo-German agreement to partition Poland. Stalin knew Hitler could not be appeased but he was playing for time. He had to rebuild the Soviet military which lay in a shambles by the closing stages of World War I when the Revolution claimed Russia; not to speak of his own purges which swept away some of the best officers.

When Germany did attack the Soviet Union after overrunning Western Europe, Russia used its mammoth open spaces and boggy roadless countryside to exhaust the strike power of German armour, the key to blitzkrieg. Fortunately for Russia, the German army expended critical summer days “pacifying” the Balkans. Other troubles surfaced. The mobilization against Russia was delayed. German military commanders knew the fate of armies trapped in the Russian rains and winter. Yet they tempted fate out of fear of Hitler.

But it was not just the weather. By one reliable estimate, Stalin threw six Red Army soldiers against one Wehrmacht trooper in the east and four in the Caucasian push north of the Germans. Much Russian blood was shed in stopping the German war machine whose impact on Russia’s demography and skewed sex ratios is felt to this day. The West was not grateful to Russia and no sooner was World War II over than the Cold War commenced, which continues in one form or another against Russia even today.

The Russians are completely aware of this past and unfolding present and know to take care of themselves. When US and European unilateralism in the Middle East set the region aflame and terrorists took control, Russia warned of the horrible consequences. In one summit conference after another, President Putin pleaded with Western leaders not to arm and encourage terrorists and destabilize existing governments in the Middle East.

The West taunted him. (It was Afghanistan over again.) The deposition of Saddam Hussein and Western meddling in Syria spawned the Islamic State. The war against the Islamic State would have been lost but for Russia’s bold and calculated intervention. The retaking of Palmyra bolsters Russia’s credentials as a stabilizer in the Middle East and grand preserver of heritage.

It is not too late for the West to heed Russia’s geopolitical advice on the Middle East. As a former empire and Modern Great Power, Russia has enormous experience and accumulated wisdom in these matters. Britain was admirable in such things once. No longer. Pay attention to what Russia says and does.