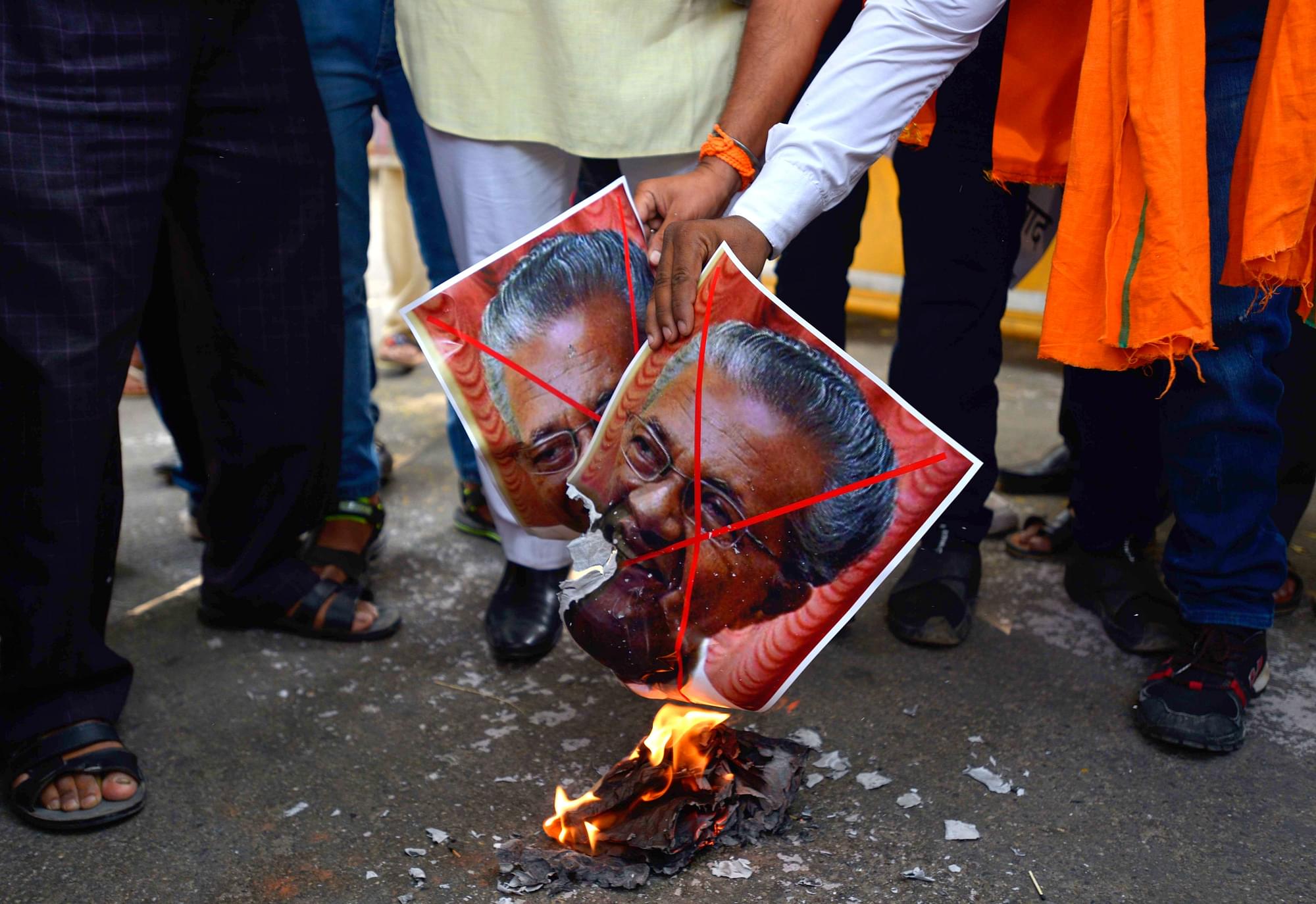 People protest against the Chief Minister of Kerala Pinarayi Vijayan against the state government for not filing the review petition. (Biplov Bhuyan/Hindustan Times via Getty Images)

The Kerala High Court on Monday (19 November) criticised the state government, led by the Communist Party of India (Marxist), for using excessive police force against devotees at Sabarimala under the guise of implementing the verdict of the Supreme Court regarding the entry of women of reproductive age into the shrine. Coming down heavily on the state machinery, the High Court said the heavy-handedness must stop and warned against denying devotees their rights. It said that the police “should normally be confined to their barracks instead of trespassing into spaces reserved for pilgrims”.

During the initial phase of protests at Sabarimala, the police were seen pelting stones at devotees and vandalising their vehicles. The state government had deployed thousands of police personnel to dislodge unarmed, peaceful protesters, a majority of whom were women. The crackdown on devotees of Lord Ayyappa has continued since and over 3,345 people have been arrested. On 17 November, it had registered cases against 200 people for protesting at the Cochin Airport invoking Indian Penal Code sections 143 (unlawful assembly). 147 (rioting) 341 (wrongful restraint) and 506 (1) (criminal intimidation).

India Closer To Malaria-Free Tag, Cases Dip By 24 Per Cent In A Year

In a development that is likely to bring trouble for the Congress ahead of the 2019 elections and may bulldoze its offensive against the Rafale deal, a court in the United Arab Emirates has ordered the extradition of Christian Michel, a key accused in the Rs 3,600 crore AgustaWestland choppers scam, to India. According to reports, Michel was given around Rs 350 crore by AgustaWestland to bribe Indian politicians and get the company a deal from the government.

According to a report in The Pioneer in 2013, which cites Italian newspaper ‘Lettera 43’, Michel’s late father was “close to the Congress party”. Guido Ralph Haschke, the second middleman in the deal, was the Director of a real estate firm owned by relatives of Kanishka Singh, who is associated with a Congress high-up. A chargesheet related to this case, filed in an Italian court, talks about a “family” getting around Rs 200 crore as kickback from the helicopter manufacturer.

Notice To 1,775 NGOs For Not Filing Foreign Funding Statements

Continuing its crackdown on ‘non-government organisations’ violating foreign funding rules, the government has sent notices to over 1,770 outfits for failing to file statements on donations received by them from other countries. Among others, the Ministry of Home Affairs has sent notices to Infosys Foundation, Skoda Auto India, University of Rajasthan and Madras Christian College. It has said in the notice that the NGOs have not submitted online their income and expenditure statement, receipts and payment account, balance sheet for up to six consecutive financial years 2011-12 to 2016-17 despite being reminded repeatedly.

The government has said that it would take “appropriate action” if the outfits fail to comply with the provisions of the Foreign Contribution (Regulation) Act. Shree Siddhivinayak Ganapati Temple Trust has also received a notice. Licences of around 20,000 of 33,000 NGOs have been cancelled by the government after they were found violating foreign contribution rules.

In what appeared as a threat issued to government employees in Madhya Pradesh, Congress leader Kamal Nath has said that “all officials should remember that there will 12th (12 December) after the 11th (11 December)“. "Yaad rakhna, 11 ke baad 12 bhee aata hai," said Nath, a nine-time Member of Parliament from Chhindwara, in Hindi, referring to the 11 December vote-counting day. The leader, seen as one of the front-runners to be his party's chief ministerial candidate, has accused government employees of being biased against the Congress.

In its manifesto, the Congress party has said that it would ban the participation of officers and employees of the government in RSS shakhas. The Congress government had put in place such a ban in 1981, which was renewed in 2000 by the party’s government led by Digvijaya Singh.

Maldives May Pull Out Of Free Trade Deal With China

The new government in the Maldives is likely to pull out of the free-trade deal with China which the country’s former president, Abdulla Yameen, had signed with Beijing. Yameen, who steered the Maldives closer to China and into its debt trap, was ousted in the elections held in September this year. Ibrahim Mohamed Solih, who was jointly fielded by the opposition parties after Yameen jailed many of their leaders on trumped up charges and imprisoned Supreme Court judges when they declared the arrests illegal, was sworn-in as the country’s new President on 17 November. Prime Minister Narendra Modi, who did not visit the Maldives since coming to office in 2014, was present at the swearing-in ceremony.

The Maldives first democratically elected president, Mohamed Nasheed, has hinted that Male is set to pull out of the ‘one-sided’ deal with Beijing. Nasheed, who heads the party which Solih is a member of, said parliament would not pass the law changes required for the zero tariffs agreement to come into force.

Voting will take place for the second and final phase of the Chhattisgarh Assembly polls today, sealing the fate of 72 seats spread across 19 districts of the state. A high turnout of over 76 per cent was registered in the first phase of polling, held on 12 November, covering 18 seats across Maoist-affected regions.

We Must Protest Twitter CEO’s Selective Targeting Of Brahmins: Why Twitter’s explanation ‘that they wanted to hear all sides’ doesn’t wash.

In Madhya Pradesh, Rajasthan, And Chhattisgarh, It May Well Boil Down To The SC-ST Vote: In the three central and northern states going to the polls, the sheer numbers of the SCs and STs make their vote decisive.

David Frawley And Why The Indian Left Hates Him: Frawley is respected in Hindutva circles not because the movement has a paucity of intellectuals but because he is a scholar and friend of Hindutva.

The Central Vigilance Commission Is Respected, But Not Feared: It does not have the clout to purge the country of financial crimes, but the government must pay heed to at least its warnings, before it’s too late.