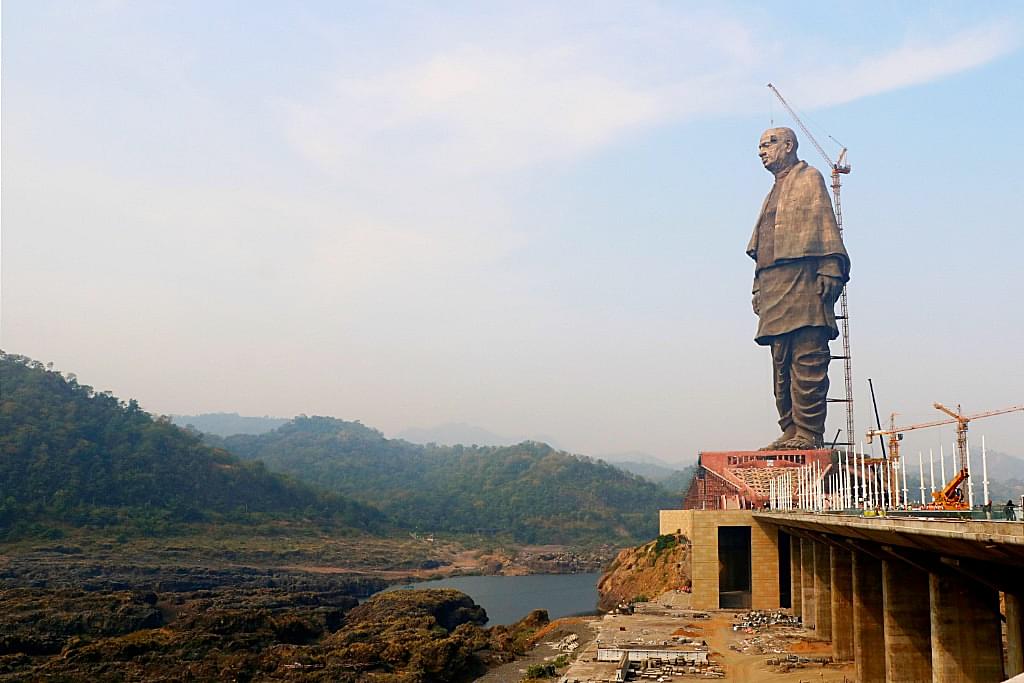 The site of the Statue of Unity near Sardar Sarovar Dam on October 18, 2018 in Kevadiya, India. (Siddharaj Solanki/Hindustan Times via Getty Images)

On the 143rd birth anniversary of Sardar Vallabhbhai Patel, Prime Minister Narendra Modi will unveil the Statue of Unity in Gujrat’s Narmada district. Built on an island in the Narmada River, around 3 kilometer away from the Sardar Sarovar Dam, the statue is the world’s tallest with a height of 182 meter. Conceptualised as Sardar Patel walking on the Narmada river towards the Sardar Sarovar dam, the statue and other related attractions in the area are likely to become a major tourist destination in the next few years.

Modi, then chief minister of Gujarat, had laid down the foundation for the project in 2013. Work on the statue started in November 2015 and has been completed in a little over 40 months. Larsen & Toubro, which designed and executed the project, deployed a team of over 3,000 workers and 250 engineers. Well-known sculptor Ram V Sutar designed the statue using over 2,000 archival photographs of India's lauh purush or Iron Man.

A night trial of India's nuclear-capable Agni-1 ballistic missile was conducted successfully today from a test range off Odisha coast as part of a user trial by the Army. Agni-I is a medium-range ballistic missile developed by the Defence Research and Development Organisation (DRDO). It is a single-stage missile developed after the Kargil War to fill the gap between 250 km range of Prithvi-II and 2,500 km range of Agni-II. The missile has a strike range of around 700 km.

The missile was first launched on 25 January 2002 from a road mobile launcher. DRDO is developing an advanced version of the missile, named Agni-1P. The new version is likely to replace Prithvi and Agni-1, developed with relatively low-end technology in the early 1990s. It will allow India to strike targets in Pakistan with increased precision. Increased precision of the missile, in turn, will enable India to use relatively low-yield nuclear weapons.

After 9 years in space and over 2,600 planets discovered, NASA’s Kepler Space Telescope has run out of fuel and is being retired. Launched in 2009, the telescope was already crossed its design lifespan. It was extended long beyond its initial four-year mission and was put in safe mode for a brief time earlier this year due to low fuel level. It was launched with enough fuel on board to last for more than six years. However, it served NASA for over nine years.

NASA said that the most recent analysis of Kepler’s discoveries found that 20 to 50 per cent of the stars visible at night are likely to have small, possibly rocky planets similar in size to Earth. The space telescope will be retired into a safe orbit 94 million miles away from the Earth. Bill Borucki, a retired principal investigator for the Kepler mission, described it as an “enormous success.”

In his defence, Gandhi has said he had mentioned the name of Kartikey Chouhan's son due to confusion while addressing a rally in Jhabua district on Monday. At the same time, he has said that no number of defamation can threaten him. Speaking at the rally, Gandhi had accused the Madhya Pradesh government of pursuing a "dharma of corruption". After the rally, Shivraj Singh Chouhan had said on Twitter that he would file a defamation suit against Gandhi “for maximum damages against you for frivolous and malafide statements”.

How The Statue Of Unity Overcame Design And Engineering Challenges To Stand 182-Meter Tall: How the designers and engineers who worked on the statue, to be inaugurated by the prime minister today, dealt with challenges.

Why Tamil Nadu Doesn’t Want To Take Any Initiative In Slashing Fuel Prices: Tamil Nadu has been one state that has never made any attempt to ease the pressure of dearer petrol and diesel on the average person.

With Government On The Defensive On Many Fronts, RBI May Have Sensed An Opportunity: The central bank senses a political weakness in the Modi government at this juncture, including the possibility of widespread support from the opposition as we move into election mode. Hence the new boldness.

Join us on a three day tour (22 to 25 December) to Hampi, the capital of one of the most glorious empires of India. Click here for more details