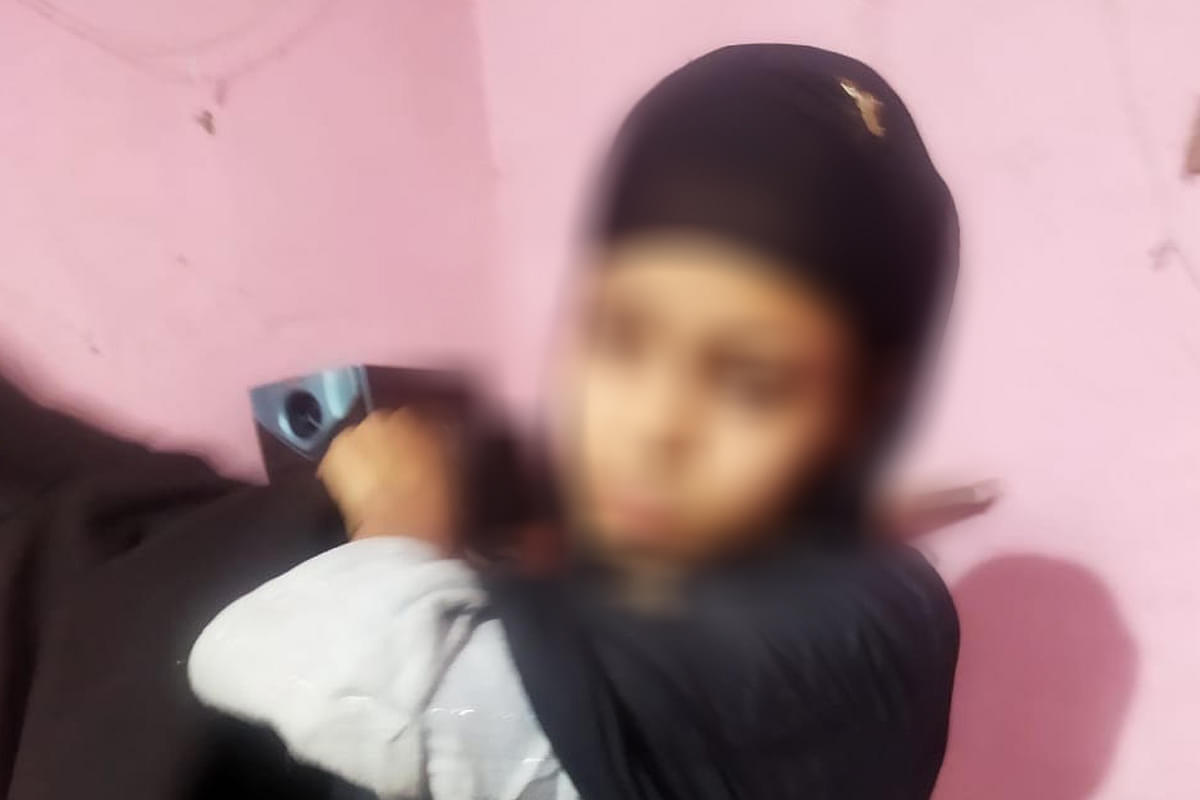 A minor girl of Nepali origin living in New Delhi went missing in October. She remained missing for three months until the National Child Commission intervened in January.

The girl was rescued two days ago, surprisingly from within the city.

The accused, Mohammed Naved alias Sameer, has been arrested.

Today @DelhiPolice rescued a girl child and arrested the kidnapper Sameer alias Naved,according to preliminary information,victim has been indicated to undergo abortion and conversion,she appears to be possibly pregnant at the time of rescue,details are awaited.@CPDelhi pic.twitter.com/50YhWVWtaN

Kanoongo said that as per preliminary investigation, the girl has been made to undergo an abortion as well as religious conversion.

Born in a Hindu family, the girl was found clad in hijab when found by the raiding team.

When She Went Missing

The girl, who is 17 years of age as per statement of her father recorded in the first information report (FIR), went missing from her house on 10 October 2021.

The statement, curiously, says that when the family gave a complaint to the police a day after her disappearance, they stated her age as 19 (a major). However, her school records showed she was 17 (a minor).

The statement says that the police should consider 17 as the girl’s age while filing the case.

Bishna Devi, the girl’s mother, told Swarajya today (10 January) that the police had insisted on writing the girl’s age as 19 during the first complaint, despite their protests that she was under 18 as she was still in school.

When called, Rajendra Singh Kasana, station house officer of Moti Nagar Police Station, said he is not authorised to comment on the case. Asked about the police action over three months before the child commission intervened, the officer said that “investigation was on” during this period.

Social Organisations Picked Up The Case

A non-governmental organisation, Rights of Women and Children Forum, picked up the case. They approached the school the girl was studying at, to ascertain her age.

Dakshin Delhi Nigam Pratibha Vidyalaya replied on 16 October 2021 that the girl’s date of birth recorded in their documents is 22 June 2004. This made her a few months short of turning major when the case was filed.

It is to be noted that despite the age proof, the police did not invoke sections of the Protection of Children from Sexual Offences Act in the FIR.

Nevertheless, the girl remained missing till December before her case reached another social organisation and eventually the National Child Commission.

In December, Rights of Women and Children Forum apprised another social organisation, Mission Mukti Foundation, of the matter through a letter.

On 5 January, the National Commission for Protection of Child Rights (NCPCR) took cognisance of the case on a request by Mission Mukti Foundation and issued a notice to deputy commissioner of police (West Delhi).

The letter asked the DCP to intervene into the matter, rescue the victim, reunite her with her family and produce her before the child welfare committee as per Juvenile Justice Act 2015.

The commission directed the DCP to give an action taken report in three days. The girl was rescued in a raid on 8 January.

Mission Mukti Foundation director Virendra Kumar Singh was part of the raid. He told Swarajya that he discovered the girl’s location a week prior to the raid.

“The girl took her phone when she left the house. It was an old Nokia handset. The number was constantly switched off so there was no way of locating her. But in December, the family had a bank passbook sent to their address through speed post. It was in the name of the girl but had a new phone number mentioned on it,” Singh said.

“We gave the number to the police. And were shocked to discover that she was very much in Delhi all along,” he said.

The girl was rescued from a house in Uttam Nagar, about 10 kilometres from the girl’s house in Moti Nagar.

NCPCR chairman Priyank Kanoongo told Swarajya that the West Delhi DCP has not apprised him of the action taken report so far. Once it it received, the commission will be in the know of details of the police case against the accused, Naved.

This correspondent sent text messages to West Delhi DCP Monika Bhardwaj but did not receive a reply till the time of filing this report.

Naved is in jail.

The girl’s mother, Bishna Devi, told Swarajya that she and her husband belong to Nepal and have been living as migrants in New Delhi for 20 years. They live in a rented accommodation. They came to India for better prospects but continue to struggle financially, she said.

Her husband Dharau Raj is a daily wager while she works as a househelp. The couple has five children — four daughters and a son. Only one of the children — the eldest daughter — is married.

She says the family knew nothing about Naved when her daughter ‘eloped’ with him.

Bishna Devi says that on the same night the girl went missing, the family received a call from her. The girl told them to not look for her as she had willingly left the house.

“That was the last we heard from her. Her number was constantly switched off after that,” Bishna devi says.

She says the local police did nothing to locate her. A month after her disappearance, her husband had to rush to Nepal, leaving her alone with the kids in Delhi.

“Our house in Nepal got washed away in the rains. My husband was forced to go there. He continues to be in Nepal. As I was left without support here, I could not go to police repeatedly to ask them about the status of our case,” she says.

The mother had a brief conversation with her daughter after her rescue, when she was in police custody. “She told me she met the boy through Facebook. That’s all she told me,” she says.

“I told her if she wanted to get married so desperately, she could have told me. I would have taken her to Nepal and arranged for a match,” she says.

Bishna Devi says she has not had any conversation with the boy.

Virendra Singh told Swarajya that when the girl was found, she was wearing a hijab as is visible in the pictures. When asked, she told the police her name was Sofiya (not the name in her school records).

Singh says the girl later revealed to the raiding team that Naved had made her undergo abortion twice since October. Naved has not produced any government document of his identity to the police so far, raising suspicions that he could be an illegal immigrant in India from Bangladesh, says Singh.

The girl’s statement was recorded before the magistrate (under section 164 of the CrPC) a day after her rescue. While Singh says the girl expressed a wish to stay with her family, Swarajya cannot confirm the claim that Bishna Devi has not received a copy of the statement.

The girl is currently in a shelter home.

Case Part Of A Pattern Of Religious Targeting Of Girls

This case is yet another addition to a pattern of crimes where minor girls are lured into elopement by Muslim men on the pretext of love and marriage, where they are sexually exploited and made to convert to Islam.

While such cases from Pakistan — a country carved out for Indian Muslims in 1947 — are well-documented in Pakistani and global media, similar cases in India are routinely played down by the Indian English media and self-proclaimed ‘secular’ political parties.

In 2018, the National Commission for Scheduled Castes (NCSC) in India wrote to the Home Ministry that in cases of abduction of minor girls, the government must involve the national investigation agency. This was reported exclusively by Swarajya.

The NCSC said so in a 4 September 2018 meeting with top officers of Delhi Police in relation to abduction and rape of a minor Dalit girl from Delhi’s Sultanpuri area.

The 14-year-old girl was kidnapped by her 32-year-old neighbour Saddam Ansari on 13 August 2018, and had not been recovered yet. Eyewitnesses — including the girl’s two sisters — told the family that they saw Ansari taking her away from school, telling the sisters that he would drop her home later.

As recorded in the minutes of the meeting (a copy of which is with Swarajya; read the excerpts below), NCSC vice-chairman L Murugan stated that the Dalit body expected the Home Ministry, under which the Delhi Police functions, to get the National Investigation Agency (NIA) involved in cases of abduction of minor girls.

Murugan said it has been observed that minor girls have been found to be trafficked to other countries in the past, to be used in human smuggling and sold to terror organisations. He said that in cases similar to the Sultanpuri one, alert must be sent out at borders with Nepal, Bangladesh and Pakistan.

Hindutva outfits often stage agitations and protest against kidnappings of minor (and major) Hindu girls for their religious conversion through nikah.

On 23 September 2019, the National Commission for Minorities (NCM) vice-chairman George Kurian wrote a letter to Union Home Minister Amit Shah stating that Christian girls in Kerala are increasingly becoming the target of “organised religious conversion and using the victims for terror activities by trapping them through ‘love jihad’”.

Allegations that Muslim men target non-Muslim girls, whether minors of majors, for religious conversion through nikah have come from the Sikh and Buddhist minority communities in India as well.

This correspondent has been reporting extensively on this pattern for more than two years.

Here are links to some of the reports involving minor girls: