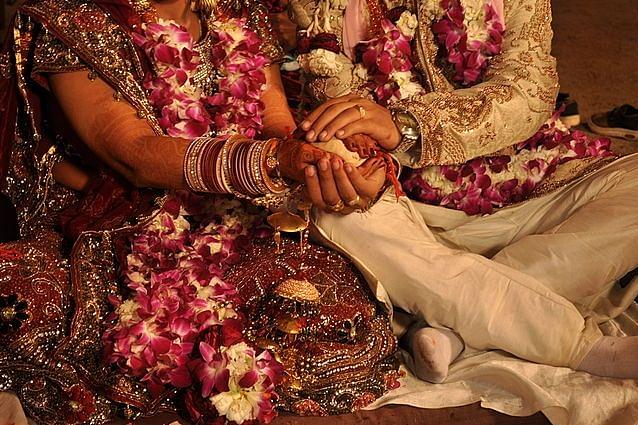 In his seminal book Pakistan, or The Partition of India, B R Ambedkar supported the concerns expressed by Hindus over ‘interfaith’ mingling of men and women.

He wrote, “…the Hindus are right when they say that it is not possible to establish social contact between Hindus and Muslims because such contact can only mean contact between women from one side and men from the other.”

In this 1945 book, Ambedkar predicted that “even with the creation of Pakistan, the problem of majority vs. minority will remain in Hindustan as before and will continue to produce disharmony in the body politic of Hindustan” in the event of an incomplete transfer of population.

Seventy-five years later, what is left of India after Partition is witnessing of brutal murders of Hindu men for daring to enter into relationships with Muslim women.

On the very first day of this year, the battered body of 17-year-old Ravi was found in the fields in Haryana’s Sonepat district. He died during treatment. His Muslim girlfriend Mubin told Ravi’s cousin over the phone (the conversation was recorded) that her brothers and father beat up Ravi to pulp when he visited her to wish her for the New Year.

Last month, 14-year-old Mahesh Kolli from Karnataka’s Kalaburagi district was killed and his penis was chopped by the family of his Muslim classmate he had recently gifted a mobile phone to.

A year earlier, 22-year-old Sanjay was similarly killed and his penis was chopped by the family of the Muslim woman he had eloped with and married as per Hindu rites.

The national capital alone has witnessed several similar murders. Less than six months ago, 20-year-old Rahul Rajput was beaten to death by the brothers and cousins of a Muslim woman he was in a relationship with. In 2018, 23-year-old Ankit Saxena had his throat slit on a road in full public view by the family of his Muslim girlfriend.

The list of such murders, if one prepares it, would be long. The cases cited above are only those that this correspondent has personally reported and verified.

At the heart of this bigotry is a translation of the Quran that forbids a Muslim woman to marry a non-Muslim unless her partner converts to Islam. Supporters of this belief cite Verse 2:221 of the Quran that reads: “…And do not marry polytheistic men [to your women] until they believe. And a believing slave is better than a polytheist, even though he might please you. Those invite [you] to the Fire, but Allah invites to Paradise and to forgiveness, by His permission. And He makes clear His verses to the people that perhaps they may remember.”

India’s largest seminary Darul Uloom Deoband maintains that “a Muslim woman cannot marry a Hindu man… they may not be halal for each other after having marriage and their marital relation will be regarded as adultery and prohibited.”

Islamic scholars in India openly promote the idea that “the kafir men and women become the cause of leading humans towards jahannam (hell)".

The religious obligation to prevent such a union has evidently prompted community members to take extreme steps.

In many cases, it is women who order the brutal killings and attacks.

In the recent mob attack on a residential colony of Hindus in New Delhi over an interfaith marriage, the key instigator is said to be a woman named Safina. The attack was triggered by the marriage between a Valmiki man and a Muslim woman, performed “as per Vedic rituals”.

Violence-affected residents have given statements on camera that Safina visited the colony hours before the attack, threatening residents of “khoon ki holi” if they supported the marriage. Minutes before the attack, the interfaith couple had appeared in the police station and recorded their statements of consent to the marriage, and left New Delhi fearing for their safety.

This correspondent has earlier reported a case from 2011, where two Muslim women from Uttar Pradesh’s Baghpat, both neighbours, were strangled to death for marrying Hindu men.

The killings were carried out at the behest of their mothers; one of them told a newspaper that the girls deserved to die for bringing shame to the community. In June 2017, a seven-month pregnant Muslim woman was burnt alive by her own family for marrying a Hindu; the woman’s mother reportedly pelted stones at the man and tried to kill him but he managed to escape.

Ankit Saxena’s murder was a similar case as the mother of his Muslim girlfriend had emerged as the lynchpin. This correspondent has earlier reported that the mother displayed signs of religious bigotry as she often told a Muslim neighbour who had married a Hindu man that she would burn in “Dojakh ki aag” (or hellfire) for going against her religion and worse, not converting the husband to Islam.

In Sanjay Kumar's case, neighbouring women told this correspondent that his Muslim wife’s mother would say in community gatherings that she just would not allow her daughter to be cremated the Hindu way.

Despite such glaring examples, response to such brutal killings in the narrative-setting national English media has been one of denial. While Ankit Saxena’s death was lazily blamed on Indians’ general objection to arranged marriages, the mob attack in Sarai Kale Khan has received only a passing coverage. A leading English daily based in New Delhi, Hindustan Times, has not reported about the violence at all.

Though unfortunate, this is hardly surprising. One cannot call out this bigotry without calling out the holy book (or the widely accepted translations of it) itself. Can one deny the verse without running the risk of blasphemy?

Consequences of depicting the forbidden relationship even in fictional films in the past have proved to be fatal.

The protesters were enraged as the film depicted a relationship between a Sikh man and a Muslim woman, and had a scene showing the Sikh man applying sindoor to the forehead of the Muslim woman.

In Bhopal, the rioting mobs were led by the then president of the district Youth Congress Arif Masood. Some years earlier, two bombs were thrown at the house of film director Mani Ratnam for showing a Hindu man-Muslim woman romance in film Bombay.

The film was delayed by the Censor Board. In Hyderabad, the police commissioner had it withdrawn from 15 theatres. In Thane near Mumbai, Muslim teenagers pelted stones at cars to protest the film.

Of late, the discredited ‘liberal’ lobby, that has repeatedly been found pushing an Islamist agenda in the name of secularism, has been maliciously attempting to label the victims of intolerance as aggressors. It is now the Hindus who are being called "intolerant to interfaith love" if they oppose religious conversion of Hindu women by Muslim men, either through grooming or deceit.

This kind of narrative-twisting requires invisibilisation of those women who come out in the public to tell their stories of grooming, deceit and forceful conversions.

To keep the hoax of two-way interfaith unions alive, this lobby hides both – mob attacks and murders over religiously forbidden relationships, and religious targetting of kafir women.